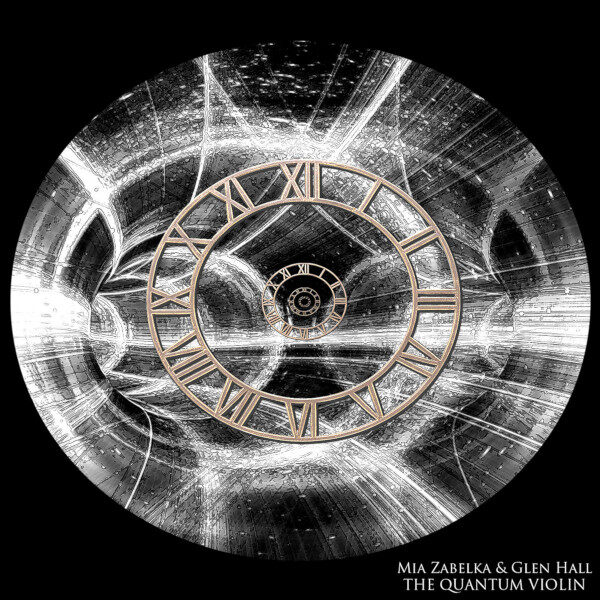 In recent times, Zabelka has professed a strong interest in what she calls “scientific music”, sometimes described as the “interdisciplinarity between music and science”; to that end she is making ever-more bold experiments with all sorts of technology, the better to interface with it and extend the reach of her music, exploiting the potential interaction between man and machine. The Quantum Violin manifests this in many ways – there’s the large number of effects and treatments applied directly to her violin playing, and her own experiments with the Ableton suite, but also the extensive computer-based technologies employed on this album, for which she has brought in the technical expertise of Glen Hall. He’s explicitly credited here with operating the “Quantum oscillator”, which to my non-scientific brain sounds like a device on a par with the Hadron collider, but in reality it is used here to create powerful synthesis effects on certain tracks. Hall also uses a number of cutting-edge editing and audio transformation tools, such as CataRT (used at IRCAM), SPAT and Omax, which I have to assume are firmly rooted in the realm of the digital and require a certain amount of programming skills to make them run, let alone perform as well as they do here. At least one of these tools works on the machine-learning principle, and its AI features must have appealed to Zabelka at some level.

14 examples of “Quantum Violin” exercises are presented here, and the underlying pattern of the music is one of profound change and alterations – we seem to be experiencing a process where the music is rendered down to its constituent parts (if we could express it as digital images, we would be talking about pixels, or even atomic particles), subjected to radical audio treatments and bold cut-up actions, and rearranged into exciting new shapes in a wild array of fast-moving events that are taking place in real time. For one thing, this real-time aspect points to the improvising roots of Mia Zabelka – she probably still wants the music to remain “live”, no matter how insanely the surface of the audio may change, and so she refuses the more sedate techniques of the modern electro-acoustic composer, who enact these changes after the fact, sitting regally behind the console as they embroider their over-considered and convoluted works. The exception to this observation, I suppose, would be the final track which is an earlier work from 2017, which has been “restructured” by Hall; it’s a tribute to Zabelka’s mentor and collaborator Pauline Oliveros, and is a suitably slow and dignified hymn of praise.

For the most part, the album is wild stuff – some frantic playing from the violinist, taking shape as some of the most extreme and alien sounds she’s ever put down on record. Her quest for exploring “scientific music” has brought her to this point where she is able to make the technology perform like a tame tiger, rather than becoming the passive servant of a laptop and its attendant programs; the science has enabled her to expand her imagination and grasp at new forms of music that might not have been possible before. It’s not entirely inept to make comparisons with Stockhausen and the advances he made when he discovered such devices as the ring modulator and the potentiometer, utterly transforming what he could do with acoustic instruments, voices, and recorded sound. The press notes describe this project as “a virtuoso escape hatch out of our imaginations”; my advice would be, jump right in. From 22 November 2021.