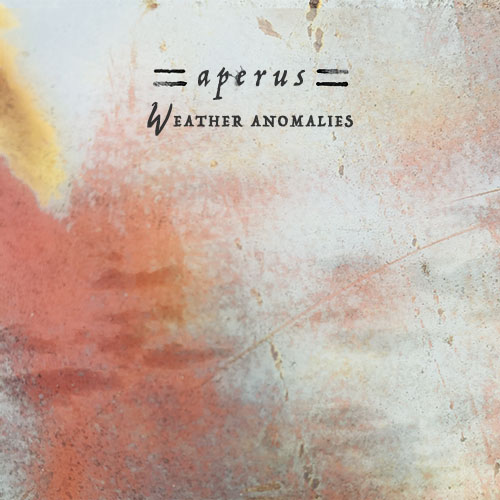 Another release from Aperus, the American sound artist who brought us the very fine Archaic Signal record in 2020. Aperus is Brian McWilliams, a fellow who lives in New Mexico in the US and is evidently very attuned to his surroundings, and connects sympathetically to the environment through his very layered compositions.

This is very much the case with today’s record Weather Anomalies (GEOPHONIC RECORDS GEOCD06); his method has been to combine a number of elements, including field recordings and ambient electronics, together with environmental atmospheres. He’s particularly interested in capturing the weather, or at least constructing some kind of audio statement that expresses the truth about the weather. He’s also making a return to his earlier recording methods and allowing some old-school analogue gear and pedal effects to come into play alongside the computers; and there’s reference made to an analogue synth from Russia, that has certain unpredictable behaviours that appealed to our man. For this release, McWilliams marshals his craft and his methods to make what he has called an “apocalyptic” album – it represents his impressions of his homeland during 2020, a time when everywhere he looked he saw signs that the world is coming to an end. It wasn’t just the arrival of the COVID virus, but also forest fires, and air pollution coming into New Mexico from Los Angeles, home of toxic smog. The more he looked at the face of the sky, the more signs of doom he beheld; some of them have ended up as colour photographs, included in the package, and there are dramatic skies and weather patterns that are hard to believe. What’s striking about these photos is they are 99% sky; the horizon line is a tiny strip of black across the bottom of the frame.

As well as the lurid colours and turbulent clouds, Brian McWilliams gathered other fleeting impressions which he took as further signs of the Apocalypse, including the rust on an ancient abandoned car (Jim Haynes would doubtless approve) and the occasion of a lightning bolt which started the Medio Fire in the mountains. All of this information has fed into the construction of Weather Anomalies, resulting in a highly compelling and slow-moving audio portrait of the environment, made all the more effective for the personal dimensions of the artist’s interpretation of it; I shall not say he is a John The Baptist prophet figure wandering the desert, nor a crazed hermetic type seeing signs and wonders everywhere, but there is an intensity to his vision that makes his speculations and diagnoses very credible and authentic. He succeeds totally in building the “immersive” effect he wishes to achieve, particularly on the long (15:53) title track, which incidentally also feels to me the most pessimistic in tone, with its vaguely minor-key colouring and its very insistent musical patterns. With these heavily abstracted repeats, it’s as though Aperus is able to represent the movements of the weather formations themselves, and also convey to us why these changes are so troubling.

At a time when we should all be more concerned about climate change and the other environmental crises happening in the world, I would hope there is also space for a voice like Aperus to join in the debates, debates which are currently dominated by politicians and business interests; to my mind, his artistic statement is every bit as valuable (if not more so) than the shrill voices of a thousand angry protesters. Arrived 16 November 2021.

Brian McWilliams writes: “A sad side note. One valley away, more mountain landscape is on fire, a total of 300,000 acres currently – the largest in the U.S. right now. It’s very early in the season so this is unusual. It was also started due to a prescribed burn. It’s called the Hermit’s Peak fire because that’s where the fire started. My wife and I hiked there two years ago. I remember it took us about 2 1/2 hours to get there by car. Now this fire is about 20 miles from Santa Fe and we can see massive smoke plumes in the sky every day. A smaller fire to the west in the Jemez mountains occasionally produces smoke that triggers air quality alerts in Santa Fe. Sadly, it is feeling like the apocalypse again. I’m certain that part of the problem is that the U.S. has done very little to address climate change, a warmer New Mexico means dryer forests. We also have allowed unfettered growth, placing larger demands on scarce water resources. Santa Fe has been a paradise to me in many ways – the new normal here is difficult to accept. New musical thoughts are forming.”