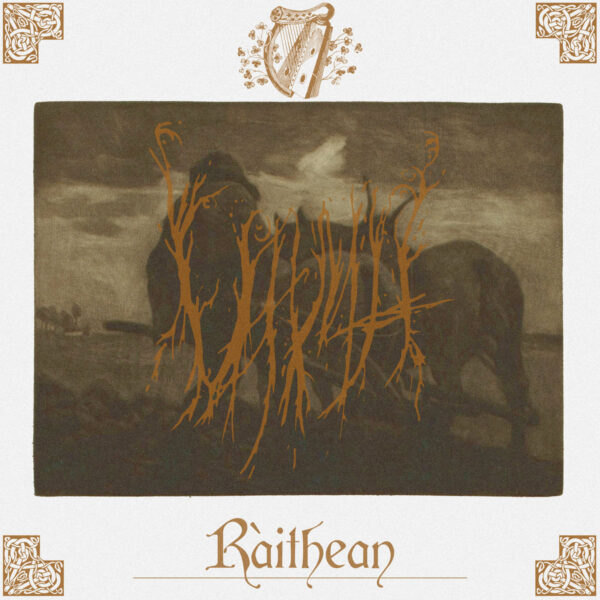 A solo atmospheric black metal project based in Montana, in the western United States, Uamh plays sweeping epic, almost cinematic music influenced by the Rocky Mountains landscapes and the open prairies of its home on “Raithean” (Irish for “Seasons”). The two long songs “Grían” and “Sruth Beinne” plunge listeners deep into the worlds embedded within the layers of grinding tremolo guitar storm and the harsh rasping vocals caught up in the trilling riffs. While “Grían” has a mood of urgency in the repeating riff loops and the speeding percussion, at the same time there are sections that have an uplifting feel and seem quite relaxed in spite of the hurry. The repetition and the hurried percussion bulk up the song into a mega soundscape piece, at least until the halfway mark where it all pauses save for a lone twangy folk melody and some droning accompaniment in a seemingly bewitched ambient world that form a new towering edifice of sound. Motifs from early on reassert themselves and continue until overcome by showers of rain.

“Sruth Beinne” takes off on a different though no less immersive path featuring harsh grinding guitar with moments of hypnotic twangy jewelled tones that entice and hold your attention, drawing you on through music at once inspiring yet filled with pain, torment and doubt. As in the earlier track, “Sruth Beinne” features a middle section of dark ambience, a little bit ominous but euphoric and exhilarating all the same. We go onwards and upwards, towards a distant goal beckoning to us, even though hazards and despair may lie in our way.

Though tracks are long and quite repetitive, they carry enthusiasm, passion, melancholy and foreboding in equal measure without losing momentum. They have their dark moments, but resilience and resolution overcome doubt and despair, and eventually the music arrives in a sonic Paradise. You can’t help but feel swept up and carried away by the music with those distant ghost voices, raspy as they are, as your guides.

After this and a previous cassette, also issued by Fiadh Productions, a full-length album of atmospheric black metal soundscape immersion by Uamh can’t be too far away. It should be interesting to see how Uamh’s themes about alienation and disconnection from land and nature can be adapted to a longer playing format.