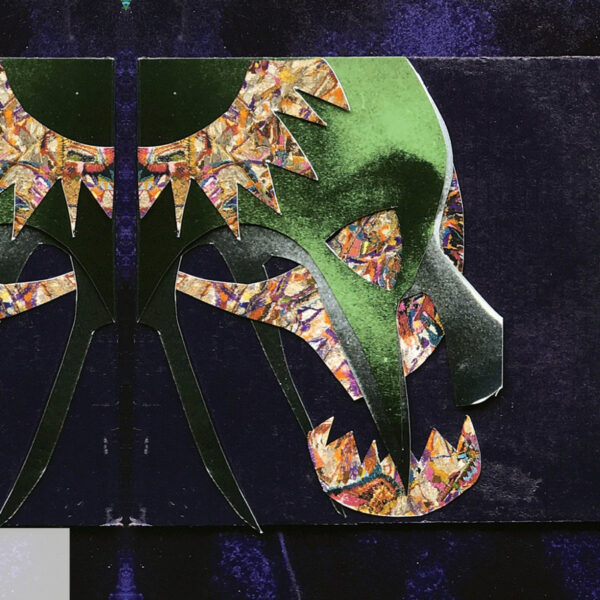 I enjoyed these two robust and appealing portions of montaged sounds from US-born Berlin denizen Jim Campbell (also known as The Preterite), composed with a light and delicate touch, very much. A really great collage of drones, detritus, ectoplasm and rictus. Rrill Bell defines his artistic endeavours with the self-built glossolalic portmanteau “turntapelism” among other mysterious activities involving securing audio from the actual world onto unwary mechanical sound reproduction formats mainly, but not limited to, the humble compact cassette. And what a striking-looking cassette! Acid green, in an opulent – there’s no other word – package involving full colour professionally-printed four panel j-card, download code card insert (also full colour) and transparent cassette library case, all wrapped up in full colour o-card sleeve inside a self-sealing poly bag. Wow. Seriously beautiful; the collage art on the sleeve would look great framed and on my wall. Seriously impressive packaging here, how Elevator Bath ever break-even is a mystery to me, unless, perhaps, they own a printing business on the side.

False Flag Rapture follows Rrill Bell’s 2020 offering – and also on Elevator Bath – Ballad Of The External Life which the Brainwashed website described as having “…an amazing sense of depth and complexity…” For this current epic, Campbell draws on “…a family legacy of hallucinations/visions…” and “…potentially staged transcendence, ecstasy of suspicious origins…” For this listener, it is certainly refreshing to assume an artist’s motives in interpreting such avenues are vaguely irreverent and/or sceptical. Neither of those terms can be ascribed to the music itself, however; there’s enough tape wonk and unexpected juxtapositioning to satisfy the most ardent Chocolate Monk label obsessive. Campbell constructs his sound world around a home recording of his grandmother “…singing an impromptu hymn in Slovak dialect…” at a family gathering, constructing an engaging sound world with choice elements of “muted celestial drifts” and “uneasy haze”.

Side A (False Flag Rupture Part 1) meanders in a very analogue way, the tape audibly stretching in places; with furtive machinery and strange creatures leering out at you from behind yew trees just before dawn and similar dreamlike scenarios. Side B (False Flag Rupture Part 2) begins in almost the same soundworld that ended side A: with a beautiful, jazzy Rhodes figure that unhurriedly disperses into a field of nefarious chimes – like chill-hop bleeding into its component pigments on an ambient square of litmus paper – before we’re eves-dropping on a family conversation again. Slowed down keys prefigure Campbell’s grandmother singing and explaining the song as she goes. It’s nice to hear such a personal moment. Then: slow chimes, unease, reverse atmospheres, dug-in dust, mountains collapsing in slow motion.

The talents of additional guest musicians are utilized neatly and with great effect: clarinet and flute from Felix Fritsche, cello played by Koenraad Ecker, and contrabass and tuba from Alex Morsey. Beautiful music; a beautiful project. I’m looking forward to his next.