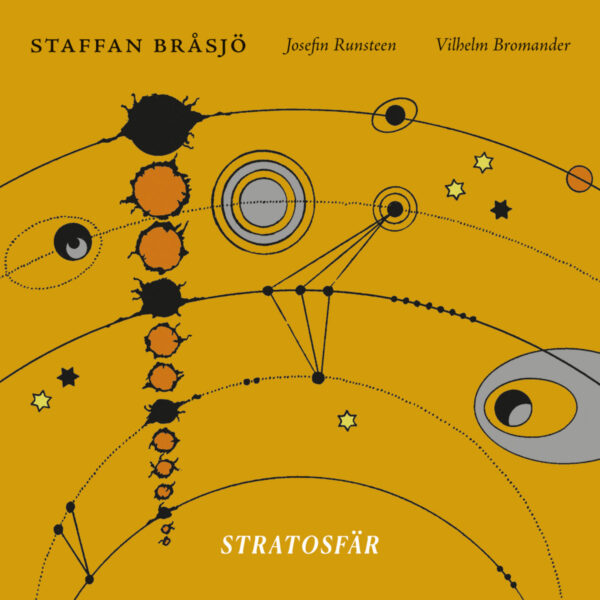 The Stratosfär (SB01) album is composed and played by Swedish musician Staffan Bråsjö, who is classically trained and an accomplished jazz pianist. Appearing here on piano and organ with support from Josefin Runsteen (violin, mandola, percussion) and Vilhelm Bromander on double bass. Elegantly composed and tightly-scored chamber-jazz music results, arriving at a very precise architectural framework of which Bach might have approved at some level.

The work is themed / conceptual, aiming to build a “musical boundary layer” as a sort of metaphor for Earth’s stratosphere, which can be perceived as an atmospheric layer. The composer’s liner notes indicate he’s conversant with such matters, and natural sciences in general; I do like his notions of a “sacred sentiment”. He also manages to layer in classical quotes from Beethoven’s Seventh and “voices from an archaic chorale”, with a flavour of 19th-century Parisian life. On early spins I found this one a bit stiff and yearned for a little more loose improvisation in the structure (although apparently he does allow for it and claims an alignment with Nordic jazz), but today I’m finding much to enjoy in the pre-arranged syncopations, the intelligent dynamics, the melodies which are satisfying without being sentimental, and, as mentioned, the dead-on precision with which each note is delivered, landing right in the pocket like a well-aimed snooker ball. It’s good to hear this precision in the service of depicting something as intangible as an “atmospheric layer”; if Tangerine Dream approached the same topic, we’d be almost certain of ending up with a diffuse electronic wash.

What wouldn’t the Modern Jazz Quartet have given for a score like this? Come to that, Bråsjö is more successful than John Lewis ever was at reconciling European classical with American jazz, at least on the strength of this release…from 12th January 2022.