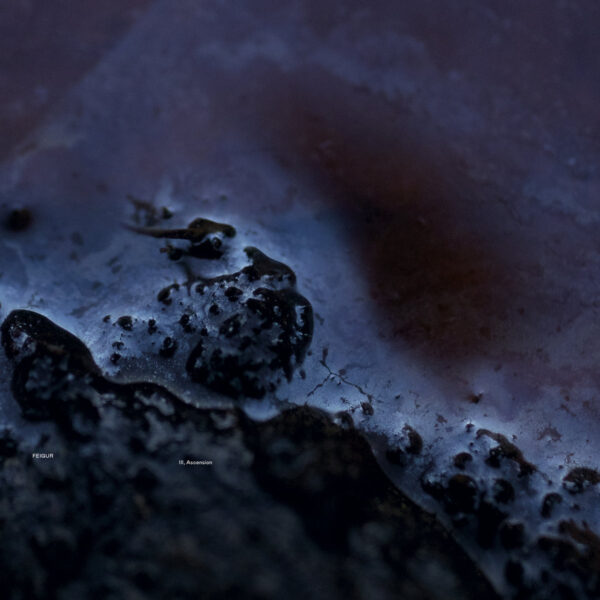 Formed in 2007 by French multi-instrumentalist Adrien Tibi, originally as a means to express his thoughts and feelings about death and the afterlife, Feigur released two recordings “I, Pestilence” and “II, Desolation” of cold and often incredibly sad atmospheric BM with dark ambient and post-BM elements back in 2008 and 2010 respectively. After a split singles release with Swedish ambient / atmospheric BM band Lustre in 2012, Feigur went quiet for nearly a decade until this third release “III, Ascension” which, unsurprisingly, deals with death and what lies beyond, and its impact on the living and how it affects human emotions, memory and spirituality.

The big surprise for me is that from its beginnings as a lone one-man depressive atmospheric BM horde with ambient elements, Feigur has literally transformed into a musical entity going far, far beyond its musical roots. No one genre can now describe what Feigur does on “III, Ascension” as this album embraces electronic, industrial, ambient, drone, noise and experimental music influences and elements, though the music itself still uses song-based structures within a framework of three movements (of three songs each) that represent a dying person’s acceptance of and reconciliation with the process of death. It seems that whatever genre or genre characteristic best serves Feigur’s purposes at particular points in “III, Ascension”, Tibi will take it on with due care and respect for what that genre or element can do. The result is that if this album is taken as part of a trilogy beginning with “I, Pestilence”, then the musical gulf between the first two recordings and “III, Ascension” ends up virtually unbridgeable.

Apart from vocals by Joanna Stawnicka (who also took the photograph for the album cover) during the first movement “Déchirements” (“Heartbreaks”) and Tibi’s occasional monologues on the other movements, the music is entirely instrumental – that’s a major break for Feigur from earlier releases in this trilogy – and has an immersive epic soundtrack quality as it takes its audience on a long, often twisting journey that seems much longer than it actually is. “Déchirements” itself will be revelation enough for those who already know Feigur’s previous recordings: while the moods and atmospheres here are ominous enough, the style of music here is dominated by electronic industrial soundscapes with some vocal samples and enough repetition of particular melodies and drone loops to suggest a ritual in what otherwise would be improvised ambient sound art. Stawnicka’s whispered vocals serve as the main natural element still linking a dying soul to former earthly life in this highly abstract music landscape. The second movement “Deuil de soi” (“Self-grief”) seems intended more as a meditation on one’s passing, of which grief and regret may be part of the process of acceptance. Sorrowful it certainly is, but there also appears to be a sense of comfort in parts. The soul cannot fight any more against death than it has done so far, the process cannot be reversed, and whatever sadness or anger or other emotion must be expended so that the soul is ready for the next stage, it has to be done here. This part of the album is the most melodic and atmospheric in terms of the music’s style and structure.

“Apaisements” (“Appeasements”) includes some of the most searing and confronting noise I’ve ever heard but also moments of serene synth and piano melody and quiet beats, sometimes all at once or in quick succession. Abstract noise, illbient-styled techno paranoia (track 8) and solo piano melody with a beats accompaniment (track 9) make up a complex and rather fragmented conclusion to the album and probably the whole trilogy.

As most tracks are fairly short – only a couple are longer than six minutes – and each track differs from the rest in style of music or balance of different genres, the recording does seem a bit fragmented in parts. Some tracks seem to come and go when they could have been a bit longer, though this impression might not arise had the tracks been joined together so that the momentum flows more easily from one track to the next. The sense of a journey, the passage through its stages and their necessary ritual completion, and the emotions and moods associated with the transition, might be more obvious to listeners. Still, the inclusion of so many different genres, not all of them compatible with another, into a recording where they not only represent stages in a process but are necessary, even natural in that process, and the resulting work sounding coherent and flowing well enough, even with all its flaws, is an astonishing achievement.

From here on, whatever Adrien Tibi / Feigur does next, the music universe is truly open to him. That’s probably the scariest and most confronting aspect of “III, Ascension” that not even he may have thought of!