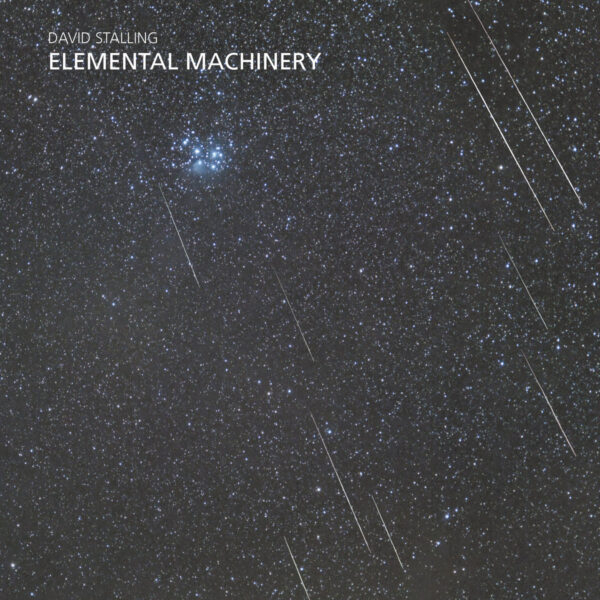 David Stalling
Elemental Machinery
IRELAND FARPOINT RECORDINGS fp076 (2021)
Site-specific electro-acoustic compositions based on telescopes, and their location…he did it in the Canary Islands at the observatory, and captured such astounding sounds as the inside of the gigantic dome, rotating microwave telescopes, solar mirror telescopes, and two giant windmills on the roof. The recordings have later been layered with pleasing music from guitars, tuning forks, and a modified autoharp, along with some additional electronics.

Unlike some instances of field recording where the composer is content to present a rather “static” view of a landscape or waterfall, what strikes me about David Stalling and his telescopes is the considerable number of “events” that are taking place, as the huge machines and domes rotate and swing into action, gears and levers locking into place…in my imagination at any rate. At the same time, the gigantic scale of the machines is made more human and approachable by the composer’s user-friendly musical interpolations. I particularly like ‘Quijote’, the one with the windmills, which is taking a cue from the observatory to make a clever literary reference to Don Quixote, but is also a very successful blending of mechanical sounds with his understated lap steel and autoharp playing. One might almost say that man and machine are working in harmony.

You may prefer the long track ‘Cupula’ which is based on the survey of the observatory dome, and from which a very romantic statement in music and sound gradually emerges; in 2017, he did this one as an audio-visual installation piece in Dublin, which doubtless achieved the “immersive” experience which so many composers in this area hope for. No less romantic is ‘Sun Tracker’, which although based on the mechanical movements of a solar mirror telescope, could easily pass for an ambient orchestra of remarkable lushness…the composer was entranced with the way that the telescope produced its own “microtonal solo melody” as it whirred around, and he seized the opportunity to apply his electro-acoustic skills.

Overall, Elemental Machinery feels like it’s underpinned with this romantic, interpretive spirit all the way through, and the “machine” aspects of the telescopes are very soon sublimated in this artistic plan. Some there have been – e.g. Trevor Wishart and his famous Machine from 1971 – who take the opposite path, imagining a grim future where the machines have taken over, rather than this benign vision of David Stalling. Others there be who get too caught up in the science and technology of a project like this, or at least they like to pretend they understand it, and demonstrate their credentials with album notes of quasi-academic texts, dates, and citations. David Stalling does no such thing, I’m glad to say, and his guiding light, his main goal, is to present art of great beauty. From 14th January 2022.