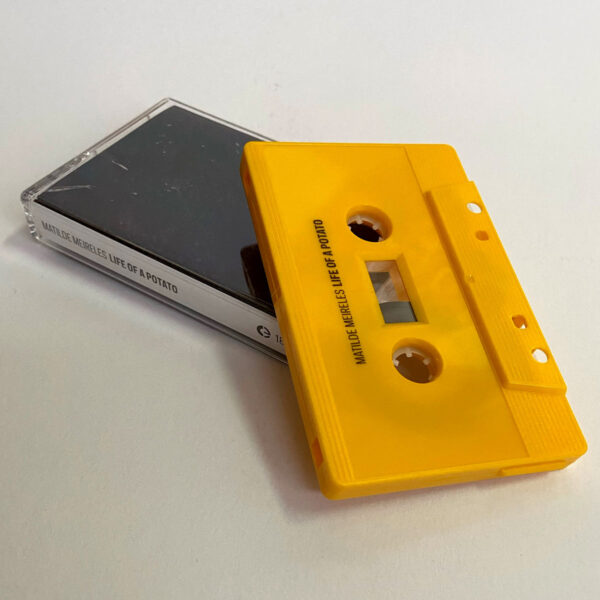 Quite nice field recording cassette by Matilde Meireles…on Life of a Potato (CRONICA 180-2022), she proposes that we have taken the humble potato for granted for far too long and resolves to show us more of its life, as rendered in sound.

Her recordings depict the potato growing the ground, and also being roasted and eaten; she managed to capture the former sound by picking up vibrations in the soil itself, by means of a rake. The B-side of the tape focusses more on the cooking stage, and ruminates on the topic of energy itself (that being used to fire the oven for roasting), I suppose as a counterpoint to the idea of the sun helping the tubers to grow. I like the holistic approach of Matilde Meireles here, and one might almost say she’s understood the life-cycle of a vegetable in the story she tells here, to say nothing of a smattering of its place in history and culture (there is a reference to how the potato travelled to the UK from Spain in the 17th century). I wish the recordings themselves were a bit more interesting; one hopes for something conveying the vitality of growth and the excitement of cookery, yet nothing so very vivid has landed on the tapes, which are mostly flat and murky.

For an inspiring read in this area, I personally recommend the works of John Stewart Collis, a postwar ecologist who later became something of a mystic; he devoted one chapter of his book to a description of the life of the potato, and it positively sings as he expresses in prose the small miracle of nature that has taken place with soil, rain, and sunshine. “When we eat a potato,” he wrote, “we eat the earth and we eat the sky.” No such revelation on this tape, sadly, but it’s a strong effort nonetheless. (11/01/2022)