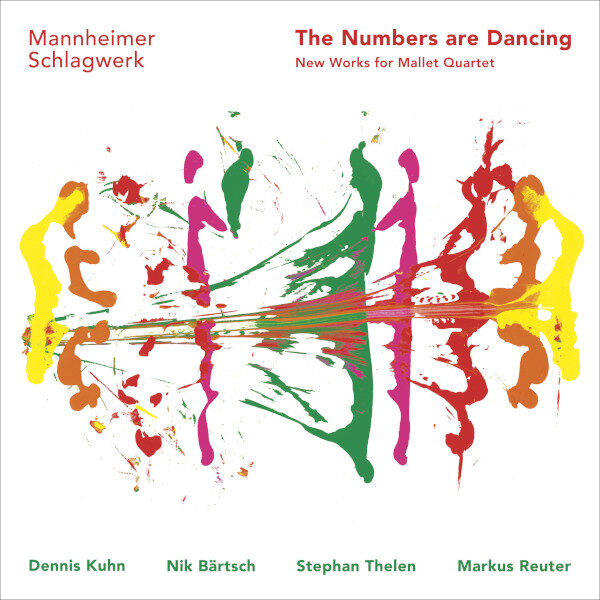 The Swiss composer and percussionist Dennis Kuhn founded the Mannheimer Schlagwerk in 1996 and now acts as its artistic director. Here they are with The Numbers Are Dancing (SOLAIRE RECORDS SOL1012), showcasing the talents of the seven talented players – a core of five marimba or vibraphone players, occasionally joined by the clarinet of Nawon Lee and the organ of Lukas Heckmann.

The five pieces, all new, have been provided by composers who are close to the group in one way or another, and not unconnected to the Switzerland hub – Nik Bärtsch lives in Zurich, Stephan Thelen moved to that country after living in the USA. Mannheimer Schlagwerk have modelled themselves after Steve Reich’s Mallet Quartet to some extent, but the claim is they are “using his template to lift off into new territories.” While the music here may resemble Reich on the surface, with its regular simple patterns and pulses, it’s true that it’s far less “minimal” than Reich was, and doesn’t insist on stark basic repetitions to make its statement clear. Matter of fact some of the pieces, such as ‘Russian Dolls’ by Thelen, are downright melodic, dynamic, and extremely accessible; Thelen’s other piece ‘Parallel Motion’ is exciting too, making use of what I assume is very ingenious syncopation to produce genuine sensations of movement and an impression of great complexity.

Markus Reuter, conversely, is noticeably more restrained on his ‘Sexgott’ piece in three parts which namechecks the gods Mars, Venus and Eros in its short, thoughtful passages. Where Thelen and Bärtsch both like to keep the Ensemble busy and give them an abundance of notes to play, Reuter prefers to leave more gaps. If the piece really is about “sex gods”, then they’re very thoughtful lovers and not prone to lose themselves in an ecstasy of erotic passion. Interestingly, Reuter mentions both Robert Fripp and Frank Zappa in the notes here; I think he went to one of Fripp’s guitar workshops, and Zappa was no stranger to complex percussion runs (Ruth Underwood, who met every musical challenge that Zappa threw at her, was one of the group’s unsung heroines). The Reich comparison only goes so far though, as despite invoking the “template”, and hinting at systems music with an album title that uses the word “numbers”, the music here doesn’t strike me as especially modern, minimal, or systems-derived. None of which is necessarily bad.

There is more information about the players, and the compositions, in the 64pp booklet that’s enclosed in the slipcase of this lavishly-presented release. From 11th January 2021.