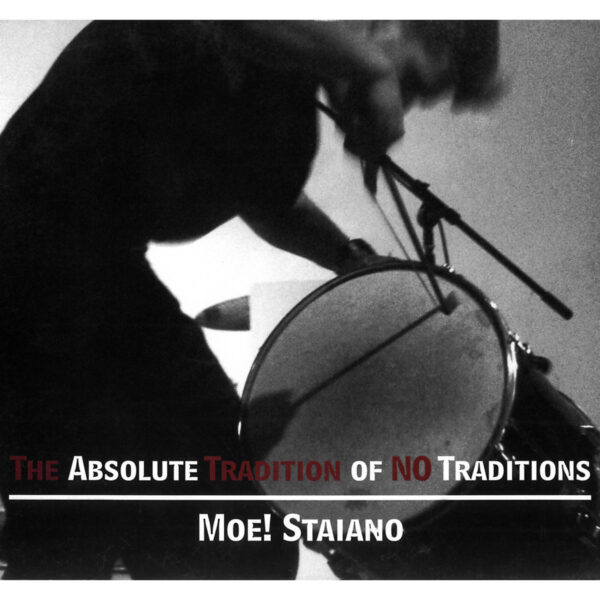 Couple of far-out percussion records to contend with today, sports fans. Moe! Staiano plays 10 tracks of solo percussive energetic nutsoid hedgehoggery on The Absolute Tradition of No Traditions (PSYCHFORM PFR06), released on Stan Reed’s label which has been home to some real corkers of dementia. Unlike some releases in that catalogue though, the Moe!ster does everything live and wears his ‘no overdub’ cred on his short-sleeve shirt like a hard-won medal. There’s no 3-D object in the world he won’t bang on; along with the ‘conventional’ drumkit, there’s a prepared one, and all manner of junk ranging from aluminum bars to a scuba tank brought into play. Can you imagine having breakfast with this guy? Buy this and you won’t need to, because the typical domestic photos reveal him apparently balancing upside-down on the dining-room chairs with ease, thus confirming his motto “Ya gotta shuffle the deck now and again!”. Got a feeling that when spun, this CD will cast a whole new light on my Chris Cutler records.

Other percussion record is a CDR by Cars (carried over from last week’s incoming box), called Cars, and it’s 003 on the RAYON label. Pascal Nichols sent this green spray-painted spangly plattamaroo from his Manchester home, along with a note scrawled in biro on brown paper. Nichols is also in Stuckometer and Whole Voyald, while his sparring partner Patrick Farmer wields sticks for Good Anna and LOTRH. Hot from a live sesh of February 2007, this lo-fi globule features a lovely cover screenprint depicting something which might be a radioactive sea-anemone floating in the dark night skies.

The Cracow Klezmer Band have Remembrance (TZADIK TZ 8116) on John Zorn’s label as part of the ‘radical Jewish culture’ series. Smartly presented in the familiar black and gold artworks, there be nine tracks of immaculate live Klezmer music by this acoustic quartet, who play violin, bass, clarinet and the ‘bayan’ – which appears to be a fine large accordian. These live recordings from Warsaw are warm and rich, full of stately dignity, and suggest that this lot were a phenomenon on the stage, but I guess we’ll never know as this is their last release and was a document of their final live show after ten years of music. I’m totally unfamiliar with this traditional style of music, but I dig the devotional resonances in titles like ‘The Migration of Souls’ and ‘The Colours of the Heavens’.

My favourite monotonous Swede CM von Hausswolff has got down and dirty with one Thomas Nordanstad to produce a son et lumiere work called Two Films (ERRANT BODIES RECORDS ebr_03 DVD). This one looks like a monster of conceptual bafflement which I can’t wait to get my eyeballs humming along to. Part documentary, part installation, it’s something to do with an anonymous camera investigating abandoned areas of a remote coal mining factory on a remote Japanese island. After they’re explored that particular wasteland of desolation, attracted by who knows what perverse impulse, the film-makers turn their eye on a similar zone of bleakness in the Western desert near Libya. Not only do we get ‘installation’ and ‘documentary’ versions of these essential works, but there’s a film of the two ginks discussing it afterwards. Guess I’ll give Film Four a miss tonight!

Alan Wilkinson makes a welcome return to my four walls with Obliquity (WEAVIL 23CD), a jazz set on which he’s joined by long-standing partners John Edwards and Steve Noble and forming a classic sax-bass-drum combo. Wilkinson first blasted the dust from my lugs on his Foom! Foom! CD in the early 1990s, and used to pal around with fellow Englishman and polymath composer Simon H. Fell, giving hope at one stage for a massive renaissance of British free jazz. This upsurge didn’t quite reach the promised skyrocket dimensions, but clearly Wilkinson is still honking like the big red comedy nose of a great Circus clown. Smashing triple-gatefold digipack with inner sleeve once again betrays the Bo’Weavil hallmark of quality.

Said label have also scooped the ‘golden doughnut’ prize this week for reissuing Noah Howard‘s The Black Ark (WEAVIL 24CD), a famous session from 1969 which originally came out on the Freedom label and has, over time, passed into the culture as a defining statement of Afro-American free jazz. Howard (who played in London’s Spitz this January) was joined for the sesh by Arthur Doyle, Earl Cross, Leslie Waldron, Norris Jones, Mohammed Ali and a conga player named Juma. Surprisingly for one who collects so much free jazz, I’ve never heard this disc and I’m sure that with titles like ‘Mount Fuji’ it’s going to live up to its fiery reputation. Another triple gatefold job which reproduces original sleeve art and liner notes, although it makes no claim to the ‘exact replica’ status which many reissue LPs attempt (and often fall short, I might add). Interestingly, the press release calls it The Black Arc, possibly misled by the avant-garde typography of the original title which conceals the upright of the letter K. A ‘black arc’ suggests something quite different to Howard’s intention; he may have been thinking of Noah’s Ark, and intended some form of tough-minded survivalist ethos to help the Afro-American race forward into the next phase of its struggle. Or perhaps the Ark of the Covenant, in which case the music becomes almost a sacred text of jazz music, to be carefully packed in a box and carried across the desert for the eyes and ears of the next generation. Conversely a ‘black arc’ seems to indicate the arc of a diver, or the rise and fall of a line on a graph; both somehow carry connotations of decline. And that’s the last thing I expect to hear on a record which Oren Ambarchi calls ‘CLASSIC’ and ‘THE BOMB’, using full capitals to emphasise his delight.