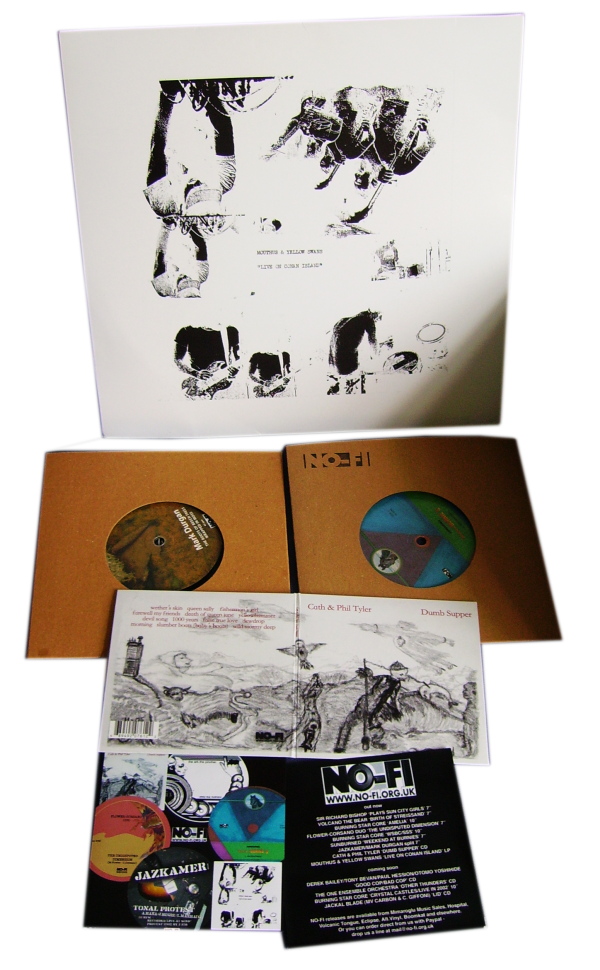 NO-FI is an English micro underground label who caught my attention due to judicious use of vinyl pressings and of course the wide range of quality music on offer from it. Not had time to fully explore these goodies in the auditionary mode, but the potential for ear-based yocks and jimpy-jollies through both lug-canals bodes well. In this batch we see an LP by Mouthus and Yellow Swans, Live On Conan Island (NEU010), which as far as can be made out is not a split LP but a recording of all four of these American maniacs playing simultaneously. Recorded on tour during Autumn 2006, this promises to be a powerful belter of nasty guitars, nasty electronics, nasty voices and extremely nasty drumming. Snork! Also from the American weird-beard brigade, we got a 45rpm EP by Sunburned (this appears to be the band formerly known as Sunburned Hand of the Man) called Weekend at Burnie’s (NEU005). With ‘Smokescreen’ on the A side and seven short tracks on the flip, including the promisingly-named ‘Zampled, The Feather Code’, this might just be the vinyl artifact that’ll restore my faith in this crew. Jazkamer and Mark Durgan made a split 7-incher (NEU006) of which ‘Tonal Protest’ from the Norwegian trio of noisesters has been spun, and revealed itself as a flat grungy slab of turgid noise. Bing-bing-bong! Finally, we’ve got the singing of Cath and Phil Tyler on their Dumb Supper CD (NEU008). These English vocalisers seem to have absorbed elements of folk and roots music from all over the world (including Sacred Harp singing) and from many types of source; their claim to originality for these 13 songs is ‘We changed some of the words and wrote some of the tunes’. Early indications look good; their voices have an untutored and rustic rough-edge which appeals, while their unorthodox approach to their material seems to be as much informed by the aesthetic of the “mash-up” as it does by Cecil Sharp or Shirley Collins. Cover art for this one is an amateurish charcoal sketch showing a country vista packed with mystical symbols flying in the sky and crawling on the face of the earth. Ignore them or die! Summer is Icumen In. Many thanks to Lee for sending these.