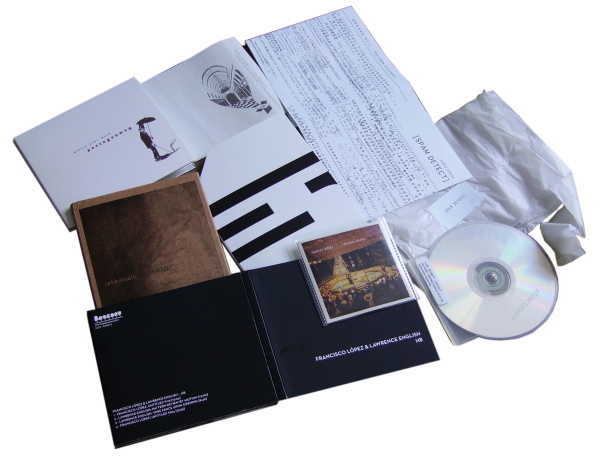 Recent collaborative field recording project is HB (BASKARU KARU:13), joint concocto-product of Spaniard Francisco López and Australian fellow Lawrence English. Both submitted an original recording to the melting pot, then elected to have it made into a remix – or as they would have it, a ‘mutation’ – by their mutual silent partner in this enterprise. The source materials, scraped from such geographical places as Costa Rica and Samford Valley, are interesting enough, but I think ‘mutation’ is rather a strong word to describe the subtle and near-imperceptible changes that have been wrought by the hard drives and mixing desks of these two minimalistic sonic delvers.

German Gunter Adler‘s Douche Dames (1000FÜSSLER 010) also had field recordings as a starting point, but has ended up as a lush and layered collection of musical sounds. Douches Dames used to be a swimming pool in Brussels in the 1920s; now it’s an arts lab, with no small disposition towards encouraging installations and avant-garde activities to take the place of the breast-stroke, the diving board and the brightly-coloured rubber bathing cap. Adler took his microphone among the culture-hungry crowd and sampled many other fascinating wall-based reverberations to produce this surprisingly rich and dramatic three-incher, a ‘jumbled array of electro-acoustic samples’. Same label has also released Rehearsals for Objects (1000FÜSSLER 011), by Evapori (i.e. Oliver Peters), who takes pride in the simple everyday sound sources he used to realise this work, and the fact that he firmly resisted the use of software plug-ins to process the results, relying solely on his editing skills. The results are like spending 30 minutes inside a surrealist carpenter’s workshop, filled with impossible tools performing impossible tasks.

Got a couple of fine ‘pure’ electronica releases from Raster-Noton, whose stern-faced masters live inside a Fox’s Glacier mint. Atom ™ is Uwe Schmidt who called himself Atom Heart in the ‘golden age’ of the 1990s, and his Liedgut (R-N 99) is partly intended as a romantic homage to the works of Oscar Sala and Kraftwerk. If the press release speaketh true, then Florian Schneider himself contributed a spoken-word element to this release; it’s a gem of compaction, tiny tracks lasting around one or two minutes each, packed with melodic and white-noise digital information. Great! Xerrox Vol 2 (R-N 103) is by Alva Noto, and while its iced-fog atmospheres and slow dry-ice abstractions might lead one to characterise it as ‘dark ambient’, it’s clear that the works are planned and executed with Carsten Nicolai’s usual mathematical precision. Each work is bolted together like stainless-steel scaffolding, each rigid tube sliding smoothly into its vice-like sheath. The card wallet sleeve has a stark design, like a Bauhaus version of the I-Ching.

Xabier Erkizia has released [Spam Detect] (HAMAIKA>10) and it’s based on the idea of translating spam emails into electronic noise. Obviously any attempt to do something creative about this chronic cyber-nuisance is welcome, but it’s not a very original idea; Martin Archer’s recent attempts to re-assemble spam texts into some form of random poetry were more successful. I am reminded of Günther Schroth’s lamentable project to make music from barcodes; strong high-concept idea, yet empty process art is all that results. Let me know if you fare any better with these shrill, harsh and randomised textures; I found them heavy going. Arrives packed in a flimsy white plastic bag.

Yet another sampler-genius is Pierre Yves Macé, although his choice of sound sources for Passagenweg (BROCOLI 004) is somewhat unusual; it’s a mixture of early French chansons (presumably taken from old 78s and cylinders) and field recordings of city sounds. Geoffroy Montel has assisted with some element of the process. The results are compelling and charming, creating an instant and powerful effect of dreamlike nostalgia, perhaps a longing for a pre-War Parisian life that never really existed. Beautiful surreal-lite drawings by Gaëlle Hippolyte enhance this sensation, depicting tiny factory chimneys built of brick emitting a plume of smoke appearing in the oddest places; a young girl is balancing one on her hand, a top-hatted gentleman with parasol is poking one with his walking stick, while a third appears behind an open book in a bleakly tranquil landscape.