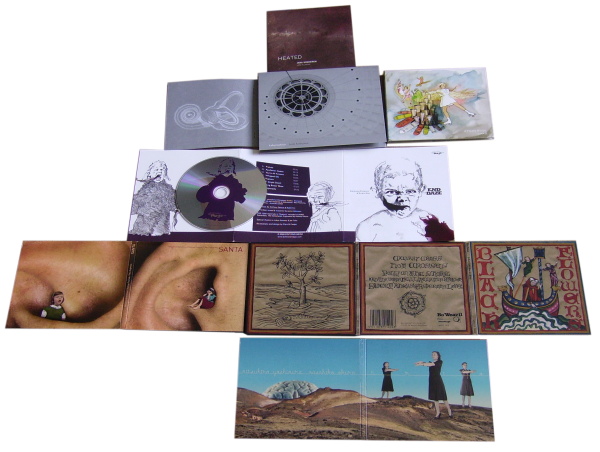 Jacob Kirkegaard offers a concept CD of sorts with Labyrinthitis (TOUCH TONE 35). Inside the crisp card wallet cover lurks booklet with dense explanatory notes regarding the workings of the human inner ear, and the symptoms of the disorder which has given the CD its name. From here it’s but a short step to John Cage, feedback, frequencies, and ‘the normally accepted direction of information streams’, as Anthony Moore dubs it. Although the cover art may remind regular Touch listeners of Spire, an ongoing church organ project to which Kirkegaard has contributed, this piece was commissioned for a Danish medical institution. This label has also been home to a CD themed on varying types of tinnitus, created by Z’EV and David Jackman. Play the CD to experience 38 minutes of a troubling and very complex shifting drone, whose high frequencies may cause unexpected effects if played back over strong loudspeakers (which is correct strategy, as it is an ‘interactive’ piece). The production of the record itself, apparently made from sounds created within Kirkegaard’s own eardrums, is also sufficiently intriguing.

Jana Winderen also has a new release on Touch. Heated (TOUCH TONE 36) is a 26-minute work of treated source materials recorded with hydrophones, devices for recording sounds beneath the sea. The fact that said oceanic sounds were sourced from Greenland, Iceland and Norway will not be lost on the attentive listener, as you seem to immerse yourself in an impossibly-abstracted ocean that appears to be ten times as deep, wide and bitterly cold as the real thing. Most fitting addition to a label that has regularly showcased similar endeavours by Chris Watson and Hazard. From a live performance in Tokyo.

Nice to see that the Japanese “Onkyo” school from 9-10 years ago is still generating amazingly minimal records, even if the very term Onkyo is disputed and quite possibly deprecated. Presquile Records have just put out two handsome digipacks of material: Santa (PSQ001) features the trio work of Mitsuhiro Yoshimura, Taku Sugimoto and Toshiya Tsunoda, playing microphones, headphones, brass sticks and generally using tiny tools to create tiny sounds within a sea of near-constant high-pitched monotone. The event was recorded at a book fair and has something to do with a private press venture called Santa, which the three Japanese artistes edit and issue themselves. Gotta love the classic “girls in the ear” cover art to this, a nifty update on Pink Floyd’s Meddle. Mitsuhiro Yoshimura teams up with Masahiko Okura for Trio (PSQ002), an even more stripped-down document created with just mics, headphones and one alto sax. I’ve heard English improvisers try to do similar things with the saxophone (which is essentially not a very quiet instrument to begin with), yet few come close to the icy precision and deathly calm of the Japanese method. As to why a duo performance is called Trio, I must direct you to the brilliantly elusive and paradoxical statement by Yoshimura printed inside. What a cover; three Zombie-like 1950s receptionists wander over a desert with a massive exposed human brain lurking like a mountain in the background! Julien Pacaud is the collagist responsible for this visual sizzling platter, and the ear-themed masterpiece mentioned above.

The team of Lavinia Blackwall and Alex Neilson first came our way with the LP What Put The Blood on Dancing Wayang records; now here they are again, performing as Black Flowers with the help of Mic Flower and the excellent Scots singer Alasdair Roberts. I Grew From A Statue to a Stone (BO’WEAVIL RECORDINGS WEAVIL 34CD) arrives in a lush gatefold digipack decorated with artworks by Blackwall herself, and is not a million miles away from resembling a Shirley Collins LP in look and feel. I remain impressed by the combination of Lavinia’s classically-trained voice with that of Neilson with his slightly less tutored approach, and the album has a very full sound instrumental-wise. If I tell you that they do a version of ‘Polly On The Shore’ (memorably recorded by Trees in 1970) and that the opening cut is a rousing version of Richard Thompson’s ‘Calvary Cross’, then fans of a certain vintage of UK folk-rock of the 1970s will count this a mandatory purchase.

Ethan Rose has sampled an old Wurlitzer Organ for Oaks (BASKARU KARU:14), and manages to extend this single idea across eight slow-moving and quite charmingly beautiful creations. The organ is of the sort that used to appear at skating rinks, as confirmed by the very nostalgic cover art, and the whole of Oaks is suffused with the same wistful longing for departed times. The artist feels compelled to provide an inventory of all the pipes and sound effects found on the original instrument, but their distinctive voices have all melted into one pool of richly-burnished dronery. Aye, it’s a slightly process-heavy work, and there are moments where the phase effect threatens to win out, but Oaks remains a success.

The team-up of Australian electronic experts Anthony Pateras and Robin Fox works to great effect on End of Daze (DE MEGO 006), their newie for Editions Mego. Their first venture for same label was a bit lost on me, but here their deployment of computers, synths, revoxes and programming is having quite a devastating near-violent effect, as they tear wholesale into old-fashioned concepts like melody, rhythmic patterns, and restraint. These illogical dynamics and wild leaps of energetic noise are finally starting to have a life outside of the computer; the Mego master-plan is really paying off!