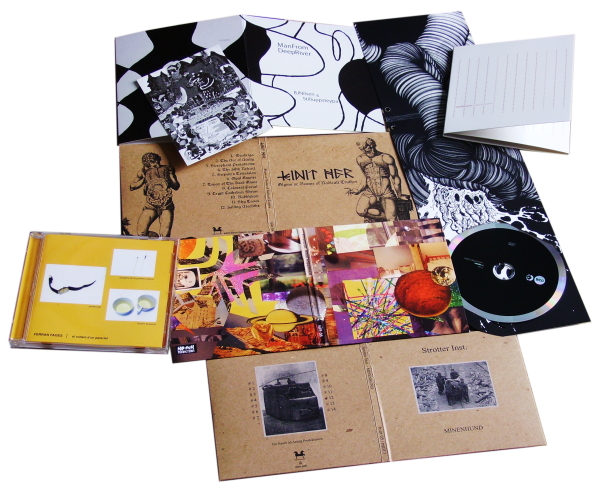 Strotter Inst. is Christoph Hess, the Swiss experimentalist whose turntable work I have heard before in 2006 on a fine 7-inch slab courtesy of US label Public Guilt. Come to that, Minenhund (HINTERZIMMER HINT 05 / PUBLIC GUILT PG017) is a joint release with said label, and it is packed with obsessional, looping noises that emanate so much sheer grunge as to make your eyes water…like witnessing the slow death of an ancient, impossible machine whose gears are made of stale, hardened dough. Hess suggests he doesn’t have much in common with the school of avant-garde turntabling (Jeck, Marclay) and is more about the transformation of the actual devices (the old decks are modified with rubber bands, sellotape and conflicting electrical currents) to generate his very-Industrial influenced textures. In this way I suppose he aligns himself to some extent with the pre-war mining equipment and other machines depicted in old photographs on the cover. Fine disc!

Kinit Her are a trio from Wisconsin, arriving with an uncategorisable disc called Glyms or Beams of Radicall Truthes (HINTERZIMMER HINT 06) – bizarre songs and deconstructed heavy rock instrumentals, performed with heavily disguised nasal singing voices, impossibly adept guitar lines, and utterly alien production treatments. With titles such as ‘Serpent’s Television’ and ‘Topaz of The Dead Giant’, one has the impression that these three wacksters are reaching for unknowable philosophical paradoxes in their lyrical content as much as their extreme music, which veers freely from pompous anthemic melodies to unfettered guitar noise. A puzzler indeed…sleeve is decorated with old anatomical engravings and alchemical symbols, a visual trick which is getting a little familiar these days, but this curious record may repay further delves.

Man from Deep River (EDITIONS MEGO DeMEGO 007) is a new full-length from BJ Nilsen and Stilluppsteypa. Three very long tracks of electronic music which I can only describe as contemporary ‘dark ambient’, very much in the Mirror / Zoviet France mould. But there is considerable skill (and even a little humour) in the editing and layering of these rather grey, featureless sounds. Nilsen in particular appears to be mostly interested in the mischievous effects his extreme sounds will have on the listener; with this record, they’re hoping for ‘temporary insanity and auditory hallucinations’.

Tomasz Bednarczyk from Wroclaw aims to capture fleeting emotions and impressions on Painting Sky Together (ROOM 40 RM425). By no means an unlistenable record, but the combination of glitchy-electronics and subdued electric piano samples soon becomes too tasteful for this listener, producing for me an aural wallpaper effect, not unlike the vertical stripes of the abstract cover art. There are a few moments when his field recording elements – such as the accumulated rainfall / water and other outdoor sounds on ‘Tokyo’ – conspire to provide more of the grit and substance I’m looking for, but this is generally a very gentle record.

Spanish improviser Ferran Fages recorded Al Voltant d’un Paral.lel (ETUDE RECORDS ETUDE017) in 2007 in Barcelona; apparently doing it live, but no trace of an appreciative audience remains on this subdued record of electric guitar solos. Not a minimal record; the sound is rich and full, various plucking, strumming and arpeggio methods are showcased, and there are probably more amplified notes per square inch than Taku Sugimoto allows himself in an entire year’s worth of touring. It just proceeds at an a very leisurely pace, and you have to admire Fages’ restraint in never once cutting loose with a speed-metal riff. I have this vision of Fages – who is apparently ‘active in poetry’ – sunk deep inside a comfortable soft armchair, contemplating a passing butterfly with a lime rickey at his shoulder, as he delivers himself of these languid musical statements.

Veteran electronicist Pure is someone I associate with the Mego label, but his new release Ification (CRÓNICA 038-2008) is out on the Portuguese label Crónica. As far as I can make out, he hasn’t played a note of music himself but recruited various fine European avant musicians to contribute samples of their instruments, which he has proceeded to rework into a meandering, mulched-up digital soup. Martin Brandlmayr, Anke Eckardt and Alexandra von Bolzyn are among those sampled, the latter notable for contributing her ‘screams’ to ‘Sonomatopoeia’ and ‘Iron Sky’. A lot of the CD is a little too over-processed for my tastes, but I like the noisy guitar bursts of Christoph de Babalon on ‘Fire’, and ‘Iron Sky’ also has moments of considerable menace in its fizzing, subliminal layers of stern minimalism. Perhaps ‘End’, which uses a bass guitar sample, is the most successful, offering nigh-on 16 minutes of highly testing minimal deep drones and coming on like the refrigeration unit of Beelzebub himself. Striking cover art is by Jan Rohlf, depicting a gigantic venting tube such as you attach to a tumble dryer, bursting forth its intestines on inner gatefold.

Lastly we have Emeralds, with a fine new CD What Happened (NO FUN PRODUCTIONS NNFP-35) released on Carlos Giffoni’s label out of Brooklyn. This trio of young electronicists from Cleveland play analogue synths and guitars on these five substantial cuts, everything was improvised, and veteran Ambient genius James Plotkin did the mastering. Apparently Emeralds also have one foot in the extreme table-noise camp, but I can assure you What Happened contains nothing but sweet and listenable sounds that appeal highly to diehard prog-rock fans such as myself. Yep, the sound they make is gorgeous – only occasionally might the listener wish for a little more structure and shape to their freely-floating performances, but a piece like ‘Living Room’ with its very circular guitar figure is apt to resonate with the Popol Vuh cheerleader section of our audience. The CD package is like a miniature gatefold LP, artworks pasted on, and the full-colour collage imagery references pyramids, outer space, cities, deserts and the weather, all endearingly assembled with sellotape and sparkles like a kindergarten version of a Hipgnosis album cover from the 1970s.