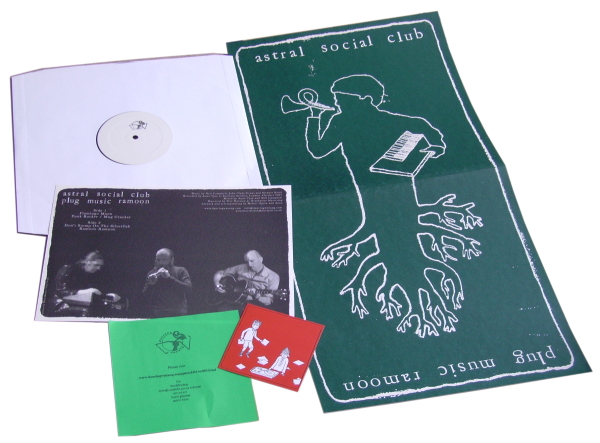 Pictured above is the full package for Plug Music Ramoon (DANCING WAYANG RECORDS 003), the new studio LP by Astral Social Club which as far as I can make out is pretty much the project of the great Neil Campbell and open-ended enough to include as members any musician he wishes to play with. I never heard his work since he went on his own path away from Vibracathedral Orchestra, whose records I always enjoyed; and Neil’s solo records, often featuring bowed cymbals as well as his customary violin recorded in edgy lo-fi, were likewise fine examples of underground 1990s dronery. For these four studio workouts, recorded in London by Anna Tjan and released in a small edition on her own Dancing Wayang label, Campbell is joined by old friend Stewart Keith, former member of A-Band, and the amazing John Clyde-Evans. Clyde-Evans has been showering us of late with his solo CDRs and LPs released under his other name Tirath Singh Nirmala, some of which directly resulted from his new-found familiarity with home digital recording and editing methods which I think offer a certain speed and spontaneity which you can’t get in a ‘proper’ recording studio. Neil Campbell, no less a man, introduced John to this way of working. Open the screenprinted cover to this album to reveal an entity that is half-human, half-tree, half-musical instrument, delineated like a fantastic hillside chalk figure on a verdant slope. Then hearken ye to th’ grooves of inserted vinyl to reveal an astonishingly lively, improvised, droney noise. Side one left me a bit flummoxed, almost unable to cope with the onrush of this extremely dense music which threatened in places to collapse into a self-indulgent cacophony. Yet by time of side two all falls into place, and what appears to be a random overlay of elements is revealed to be a perfectly-attuned, harmonious kaleidoscope of activity. I am particularly struck by the wild electronic stabs that dart in and out of the mix on some of these krautrock-esque rhythms, the clattering percussion effects, and the thick combination of instruments that results in exciting and quite unfamiliar sounds, to say nothing of the eerie vocal barks that erupt from someone’s bouchal area to punctuate ‘Don’t Stomp on the Silverfish’. I’d also like to mention that it sounds nothing at like anything else I have heard from Campbell or Clyde-Evans, an indicator perhaps of how much these very talented artists are capable of progressing and evolving in their very prolific careers of generous music. Collaborations, when successful, ought to stretch the participants, enable them to do new things and find new voices.