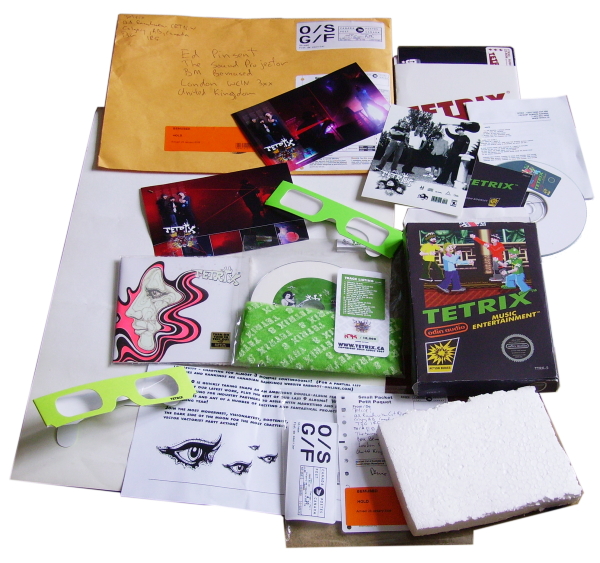 Last month we received another package from Tetrix, a curious post-rock band from Alberta in Canada, which reminded us that this was the fourth time they sent something, yet I think we’ve only noticed them once in print. I saved all the packages because of their eye-catching qualities…Tetrix also tend towards hyperbole in their own press releases, the likes of which we haven’t seen since Sigue Sigue Sputnik made their fanciful declarations about changing the course of pop music and pop records forever in 1986. Tetrix drop words like ‘astounding’, ‘visionary’, ‘monumental’ and ‘stunning’ with such gay abandon that superlatives are devalued in nothing flat, and it seems that their live shows abound with computer-controlled environments, psychedelic light shows and manipulated video projections. Yet they will also admit that most of their success is currently from airplay on Canadian college radio; and as band member Connor V. Gottfried told me in 2006, they feel themselves to be slightly beleaguered in their home country. “We are based out of a city that is not known for its arts scene,” he wrote, “so it makes us very happy to see that our disc has been played somewhere like London where people know their music! Around here, we’ve been called “worse than terrible”, “heinous and atrocious” and “pure suck” in the local papers so any exposure we get outside of Calgary is a huge help!”

I’m spinning Tetrix 9 (released on their own Odin Audio label) which has a fair degree of variety across its 25 tracks of mutated avant pop-rock, played and produced in deliberately ugly ways that would’ve fitted right in with, say, the Akron New Wave scene of the late 1970s. Some listeners may find the relentless forced wackiness of the singing voices a tad wearisome after a time, but there is skill in the instrumental playing, and the eccentric production techniques are never less than inventive. The abiding impressions are a sort of distanced alienation, mainly caused by the difficulty in deciphering the song lyrics and other information that is being relayed with such perverse opacity; and the fact that I never know where to put myself as a listener, because every other song might be a pastiche or parody of a musical genre with which Tetrix may or may not have a love-hate relationship. Country and western is one such genre into which they sink their collective day-glo teeth, sometimes chortling to themselves as they pour forth their inexplicable lyrics. Tetrix 9 has a psychedelic pastiche cover with purple and black swirls emanating from an enlightened visage, and arrives with a pair of disposable glasses which approximate hallucinogenic effects when you look at lights.

Some years ago we also received TTRX-5, which is ingeniously packaged to look like an old Super Nintendo game, which seems a logical step if you’re going to give your band a name that’s one letter away from being the name of a well-known computer game. Even the inserts in the package (lyric sheet, etc.) are disguised as Nintendo instruction leaflets. The songs here are still pretty alienating, but lack the eccentric production methods which would come a little later. Tetrix come across as just another malcontented slacker band, audibly sneering their jaded observations through bored lips as they swim in guitar sludge of their own making. A fairly dreary listen, but no matter.

About this time last year, they also sent us Tetrix 8, which is packed in a cellophane bag with a strip of sickly green man-made fur and emblazoned with cover stickers. Apparently, they optimistically pressed 10,000 copies of this release. The press release from this time describes them as ‘unsigned’, but this was not an obstacle to their gameplan: ‘By working outside the influence of commercial pressure, the band has been able to forge an identity and sound that would not have been possible within the traditional model’, they asserted. Of the three releases mentioned here, Tetrix 8 may be the most palatable; for the most part the songs trundle along driven by fairly conventional variants on 4/4 rock frameworks, but there are inventive moments in their instrumental combinations, the use of synths and electronic effects to create colourful interruptions and sounds that verge on cheesiness, and once again the heavily-disguised voices that must require the singers to remould their faces, lips and throats into a hideous mask of grimacery. Occasional found samples from TV make you think of a low-rent Negativland, but I can find no ironic counterpoint or subtext in these samples; they just take up space on the tape. Once again, the sheer opacity of their overall approach makes it hard to get a purchase on any underlying meaning, and I remain clueless as to what any of these songs are about. The worldview of Tetrix is still clouded in mystery at this time.