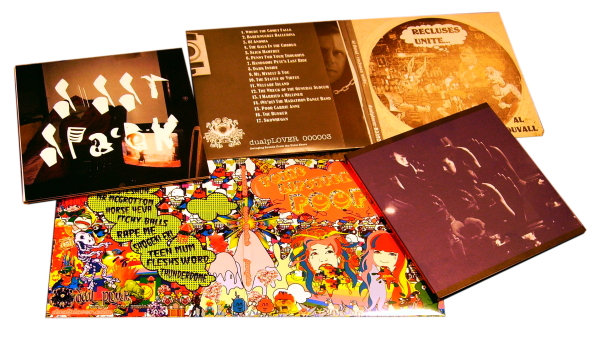 It’s been a while since we heard from Lucas Abela and his Dual Plover label out of Australia, a label whose catalogue proudly includes some of the stinkiest, most unlistenable records ever made, often produced by barely-existing artistes with implausible names whose sole aim is apparently to offend, disgust and irritate. Yep, it’s fair to say Abela’s tastes and predilections tend to gravitate towards a very peculiar strain of the grotesque in underground music, but in today’s anything-goes climate, seeking out such marginal geniuses takes some doing. With this fresh batch of releases, you may not find everything exactly to your taste (I certainly didn’t), but I feel it’s important to defend music and noise of such distinctive character – even more so at a time when all we have left is coffee parlours and juice bars all serving the same bland liquid refreshments wherever you go, and the only thing that apparently matters in life is sorting out your car insurance…

Sydneysiders Naked On The Vague offer whatever debris came out of The Blood Pressure Sessions, nine deliciously primitive tracks of harsh electro-doom punk played in monotonous ways with thumping bass, plodding drums and demented electronics. A male and female singer pitch their mannered shouty vocals to evince every emotion from bored, nihilistic resignation to a fevered, insane anger. Only in places (‘Brown Sun / Sydney Lane Rd’) do these undergrounders approach anything that might fit in with the school of benign psychedelic droning such as their fellow countrymen Brothers of the Occult Sisterhood do so convincingly. Rest of the disc is just packed with good, seething menace. Hard to believe it’s just a duo making all this racket; almost as strong as early Royal Trux.

Toxic Lipstick have released Poopin’, a sickly monster decorated in a garish and excessive cover of elaborate eye-searing collages, while the inserted booklet is a hideous pastiche of teen-girl magazines. 10 of these 11 tracks are ‘classic’ pop-song length, nothing over 2 ½ minutes, and their extremely provocative titles promise much psychological mayhem and wanton sexual hi-jinks, lifting the lid on the obsessions and libido of an imaginary teenager in a stark no-holds-barred manner. It takes some constitution to endure the shrill and squeaky voices which scatter their random vocals over these hyperdriven beats and sick electronic thrashy noises (this record’s contrived cheepniss makes Bow Wow Wow sound like Mozart), but fans of Space Streakings or Melt-Banana will be quids in.

Al Duvall‘s Recluses Unite…appears to be an attempt at a Tiny Tim revival, as Brooklyn-based songster Duvall picks up his banjo and sings 17 songs which are freakish pastiches of Edwardian, Music-Hall and early country songs (the sort of material for which Tiny Tim had genuine affection, and he included a vast cache of near-forgotten material in his repertoire). Even the CD label is printed to look like an old 78 disc. Al Duvall’s variant on these genres is to add a slightly more salacious and disreputable streak to these songs with his inventively twisted black-comedy lyrics, throwing in dirty punchlines and shades of modern depravity that our Edwardian ancestors would have blanched at. There’s also however an equally strong streak of utter weirdness and lowbrow surrealism, not too far away from the malarkey of Charles Gocher or Revd Fred Lane. When delivered in Duvall’s deadpan singing voice, this tends to leave a very odd taste in the mouth.

Sissy Spacek‘s French Record, extreme as it is, finds this listener on slightly more familiar ground. This John Wiese noise project of long standing includes, for these sessions, Kevin Drumm, C. Spencer Yeh, Kate Hall, Sam Ott and Corydon Ronnau playing in various combinations, resultant tapes quite possibly edited extensively afterwards by Wiese to reduce the whole affair to sonic rubble and cut off any energetic bursts of improvisation at the knees. Much impolite and awkward repellent noise seeps forth, creating the sort of spiky, angular effects that tend to repel most civilians. Another gloriously anti-social release from Wiese.