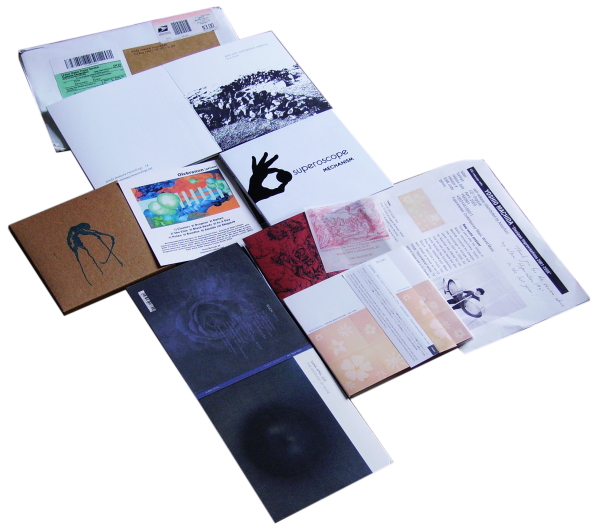 Here are two new releases from Inam Records, the US underground microlabel of groovy dark psychedelic guitar noise and twisted electronica. Sujo‘s three-incher (INAM RECORDS 30) includes ‘Clotted Wing’ and ‘The Dawn of Disease’, the first a shining example of overloaded and cavernous avant-guitar rock excess, the second an atmospheric exploration of bleak monotony using FX pedals, amps and highly-wrought electric noise. I see Sujo have moved on from their usual ‘sea monster’ imagery on the cover and are getting into something slightly more diabolical, with two unsettling old engravings which seem to relish the triumph of satanic and monstrous forces over mankind. 48 copies only. Olekranon meanwhile makes a welcome return with Gaitan (INAM RECORDS 29), a full-length release of ten new instrumental compositions, using electronics, guitars and beats. The title track, and ‘Clusters’, are particularly strong examples of Olekranon’s craft and imagination, knowing just how much the tape can be overloaded with devilish layers of noise before everything implodes. 100 copies only in a handmade chipboard package.

From New York we received Superoscope with their new Mechanism (MORSE CODE RECORDS NO NUMBER) CD. This duo play unashamed ‘electro pop’, in places resembling a slightly nastier version of Stan Ridgway and Wall of Voodoo, while paying only the scantest attention to developments in music since 1981 and ignoring some possibly-related fields (like extreme dancefloor music) altogether. While anything that smacks of disco often gets short shrift from me, there is a certain edginess to this release which lends an aura of appeal…Lee Rook composes everything, but it seems all the actual performance and recording of these 10 tracks is down to Ex Tymon, with his synths, samplers and computer-based set-up. The grim-faced tone of the rather weak vocals is a stumbling block for me personally (think of a pallid version of Soft Cell), but the instrumental passages sound like a passable version of a No Wave band that never was. Perhaps in a nod to Devo or Kraftwerk, Superoscope apparently wear white overalls when performing.

Latest release from Winds Measure Recordings is by Jason Kahn and Takefumi Naoshima, and it’s another epic of ultra-minimal improvisation and sound art. In A Room (WMR 14) features the duo playing percussion and mixing board, although for the first 20 minutes almost all you can hear on this hour-long recording is the ambient sounds of the room (including gentle traffic sounds) in which they perform, captured live on the tape, as the two taciturn geniuses consider very carefully how, or whether, they will begin playing. When they do get going it’s a very slow and cumulative build-up of a near-imperceptible electronic tone which, amazingly, seems to be totally in sympathy with said ambient room sounds, almost as though the electronic half of the act were somehow improvising with the very essence of the room itself. Kahn’s contributions include a gentle rattling of pots such as your mum would make when she’s beating eggs in a bowl on a Sunday afternoon. Providing an utterly compelling hour of sheer tension, this handsome CD arrives in the customary letterpress package which is this label’s hallmark; the cover image (inexplicably nothing to do with a room; instead it’s a nondescript pile of stones) is partially printed in blind on the wraparound cover. 300 copies only.

Japanese musician Yoshio Machida is known to us for his hypernatural series, his magical realist records which study the environment in a very meticulous and imaginative way, through field recordings and electronics. He also plays the steelpan drums, and those interested in hearing how he fares on that device can get hold of Steelpan Improvisations 2001-2008 (YM0901) which will be released in April 2009 and distributed by Amorfon. I am happy to report that the sound he gets from this instrument is every bit as rich and uncanny as we have come to expect from this talented fellow. He built the drum himself, tuned it to an ‘un-equal temperament’ (whatever that means; let’s hope it’s the exact opposite of the much-overused and misunderstood Just Intonation), and sometimes adds live digital processing to the performance, to get a pleasing drone effect along with his complex percussive notes. To describe this delicate music in any more detail would be to press a butterfly in the pages of a dictionary. Lovely!

From Touch, The Ontology Of Noise (TOUCH TONE 37) by Nana April Jun, is a most intriguing collection of very texturised, processed and powerful droning electronic noise created by a gloomy artistic Swede in Gothenburg, a locale that’s currently home to all that’s best in oppressive post-industrial noise. The sleeve note over-intellectualises the music somewhat, bringing in references to ‘abstract language’, the sounds of nature, and ‘single streams which change intuitively’. Even the track titles get in on this pseudo-academic act, with names like ‘Semantic Shift’ and ‘Process Philosophy’. However, the underlying strategy behind this release is something to do with a deep study of Black Metal, and supposedly providing a sort of hypertextual aural commentary on everything from Burzum to Gnaw Their Tongues. Needless to remark that The Ontology Of Noise doesn’t manifest quite the same degree of violence or pure hate of most Black Metal records, but it has been bred from the same strain of dark, introspective brooding, continuing the advancement of insight into that aspect of human psychology. As humans, we may not be at our best when we’re entertaining dark thoughts of revenge, loathing, or murder, but the Black Metal genre – and this CD – are doing something to help us understand and explore this condition. (Or else simply wallow in it.) Wozencroft’s suffused and blackened cover images are exceedingly fitting for this release.