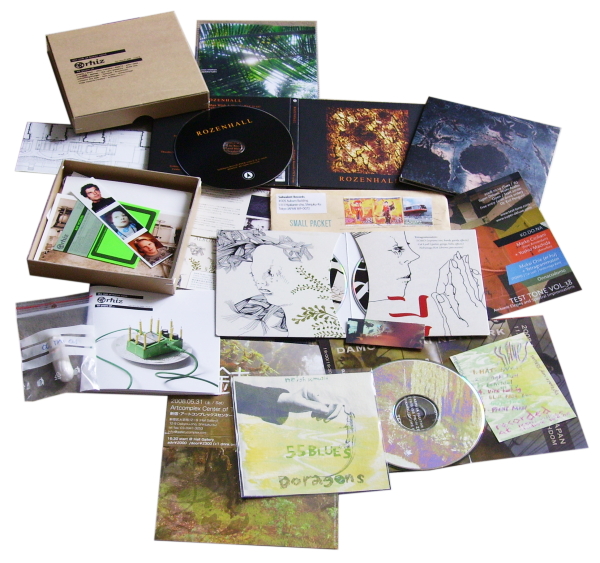 A very pleasant surprise is Tetragrammaton, a rocky droney free-noise trio from Tokyo which arrived from the Subvalent Records HQ. Elegy for Native Tongues (SBV001) can only be described as a sprawling mass of freely-played and unkempt wild improvised drone-noise, on which TOMO, Cal Lyall and Nobunga Ken let their long hair down and spill their collective souls all over the psyche-drenched studio floor, letting others do the work of mopping up afterwards. Saxophones, hurdy-gurdy, percussion, bells and free noise guitar are all deployed in an endless quest for cosmic truths, a mystical path which takes us past ‘Queen of the Ships’, ‘Kohelet Revisited’, ‘Santa Sangre’ and a troupe of ghosts, whose ethereal spirits will apparently remain even after we mere mortals have passed away. Five long studio tracks and three even more sprawly live cuts – hard pushed to decide in which arena they fare better, as both discs are equally grand. Another major bonus is the tremendous clarity and sound quality with which these intergalactic sessions have been recorded, every note fully audible in a crystal clear spectrum and thereby enabling each improvised bout to pack a tremendous aural punch. Beautiful album artworks (by Yumikofu) too. If you’ve ever enjoyed the quasi-ceremonial dronoid epic productions of Japanese players Toho Sara or Ghost, you can reckon this one a must-have.

Another pleasant surprise is the bewildering CDR Doragons (NEIGH%MUSIC) from 55 Blues, even if it does skip dreadfully in my hard drive. The duo of Horacio Pollard (UK) and Kayaka (Japan) are never less than consistently surprising, playing a wide range of instruments and yielding up unusual sounds inside some extremely eccentric song arrangements. Hard to get a purchase on these slippery eels, but try and imagine a Residents song played by free-improvising electronic madmen, leaving plenty of ‘dubby’ space and echo chamber malarkey in their very open performances. Startling. Cover artwork features a little finger being bitten by tenacious lizard. Well worth investigating, so click on that myspace link now to check availability of this little gem.

From Fylkingen, one of Sweden’s more notorious avant-garde breeding chambers, comes an excellent release. The formidable Daniel Rozenhall has remastered and repackaged two of his LPs onto a new CD called simply Rozenhall (FYLKINGEN FYCD 1029). As proud owner of the Eyeland LP from 2003 I am delighted to revisit both sides of that unholy sprawl of layered, delirious noise, which on this outing induces an exhilarating sense of vertigo and helter-skelter towards a nameless doom. 2001’s Miasmasun somehow eluded me at the time; its showcase piece is the 18-minute ‘Sinister Laburnum’, which is a ghastly work of twisted horror-movie glorp – everything is calculated with ruthless precision to create queasy sensations of nausea, disquiet and eerieness. If played after the witching hour, effects on thy nervous system could be considerable. We also received Forecusst (KNING DISK KD 029), his more recent work from last year, with a cover image that suggests a voyage beneath the surface of the earth and loud noise-music within that suggests the shifting of tectonic plates. Rozenhall makes grand use of the EMS studio in Stockholm, one of the few contemporary electro-acoustic composers who truly rocks like a demon.

The excellent Trente Oiseaux label in Germany, led by the fine composer Bernhard Gunter, has recently come back to life after a pause of a few years, a most welcome return. From their website you could purchase Understory (TOC0808), the new release by English artiste Simon Whetham, as a download for £10 and then some 34 minutes of field recordings fetched from the Amazonian rainforest will be thine. Astute listeners will recall that Francisco López has made a definitive rainforest CD (La Selva) in 1998; it seems he’s now running artist residencies out there, and Simon W. went for two weeks in 2007 to participate. What’s interesting is that Whetham’s deployment of similar sound sources delivers a completely different end result to La Selva, and Understory is an extremely dramatic and condensed composition, taking in everything about the surroundings – weather, wildlife, birds, insects and air, assembled in a slowly-unfolding linear trajectory. Beautiful, soothing, and profoundly moving.

The Rhiz organisation in Vienna has been extant for ten years now and has issued a CD in a box to celebrate. Rhiz is a label, but also a venue and a bar, a locale where discerning patrons can enjoy live music as well as sup a cup of the finest coffee that Austria has to offer, doing so in futuristic and pleasant surroundings while consorting with like-minded intelligentsia; the sort of café society thing which we have yet to embed in the United Kingdom in our social intercourse practices. On this disc – The Risk of Burns Exist, 10 Years Of… (RHIZ RECORDS #10) – are live recordings taken from the Rhiz archive, by mostly mainland European acts – such as Fennesz, Pita and Jade, Wipeout, Gustav, Schlammpeitziger, Felix Kubin – but Volcano The Bear from the UK are here too. I have tended to associate Rhiz with the same strain of minimal electronic music that emanates from Mille Plateaux, but this disc is very maximal – lively and energetic post-Kraftwerk post-Punk electronic rock music for sophisticated dancers and intelligent listeners alike. The box comes with an informative booklet and many puzzling inserts, photos, a badge, a sticker, a postcard…the most striking image to come out of the packaging is the green FX pedal on a plate, with birthday candles stuck on it.