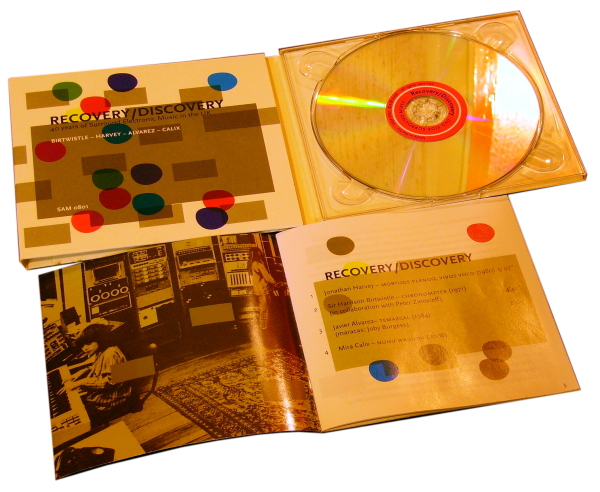 Recovery / Discovery: 40 Years of Surround Electronic Music in the UK (SAM 0801) is the debut release on the UK Sound And Music label, the publishing wing of what will soon be replacing the British Music Information Centre. I was intrigued to receive a copy as the centrepiece is the lengthy electronic composition Chronometer by Sir Harrison Birtwistle, from 1971. I first heard of this when we carried an interview with Peter Kember (aka Sonic Boom) in issue six of this magazine, where he waxed enthusiastically about Peter Zinovieff:

“The ground-breaking work done by people like Peter Zinovieff, the man originally behind E.M.S., is still yet to be properly revealed in all its glory…His studio was unique for being the only private studio in the world to have all this equipment. All the rest of them were funded by Bell Labs or by some big University. The way he operated his studio was as an experimental studio, which he would make available to people that he felt would use it in an interesting way…Everyone thinks Americans invented everything from the computer on, which of course they didn’t. It seems, through my research, that this guy also did a lot of things which have been for years credited solely to Robert Moog or Donald Buchla, things that he was actually doing in parallel. He was working on analogue synthesisers from 1962, which was quite early on. A couple of years back, he gave me all the tapes for all of this stuff. There’s Harrison Birtwistle, Hans Werner Henze, a lot of his own music, people like Jonathan Harris, a whole load of people who have now become part of the respected modern classical scene, who in their day were, I suppose, much more students of it…Chronometer by Harrison Birtwistle was released – but it was deleted very quickly, and it’s a really amazing recording.”

Lieven Bertels picked up the story in 2006, when he got in touch with Kember who is still custodian of the tapes, and that’s how the quadraphonic version of Chronometer – long thought to be lost – came to be presented here. This two-sided disk is both a CD and a DVD, the latter presenting a surround-sound version which those of you with numerous speakers poking out of their home cinema system will benefit from enormously. Indeed this composition is thought to be the first such ‘surround-sound’ piece to have been realised in the UK.

Is it ‘really amazing’? It is. It has deep conceptual and thematic unity, and is a remarkably complex construction too. Sound recordings of clocks (including Big Ben and the Wells Clock, one of the oldest clocks in the world), extracts and samples laid out in a score by the composer with the help of computer analysis, and tape recorders triggered to play the piece according to pre-determined instructions, also with the help of Zinovieff’s computer program, Musys. Muffled, distorted and alien clock sounds leak to the surface, with a gigantic amplified clock hand keeping its own formalised rhythm to regulate and structure the piece. Besides being a triumph of electro-acoustic composition, graphic scoring and cybernetic integration, it’s also quite terrifying – and somehow very depressing – to listen to. You’ll never settle for Pink Floyd’s ‘Time’ again!

Also here are pieces by Jonathan Harvey, Javier Alvarez and Mira Calix, with compositions from 1980, 1984 and last year, thus justifying to some extent the subtitle of this release. Of these, I think Harvey’s Mortuos Plango, Vivos Voco is strongest – and it has at least some sympathy with the Birtwistle recording, featuring treatments of cathedral bells and chorister voice samples in an extended contemplation of death and the afterlife. Chronometer is capable, in slightly over 24 minutes, of passing on a similar sense of existential doom to the listener. With a lengthy (32pp) illustrated booklet and presented in a double-gatefold digipack, this is a good release. My only reservation concerns the rather dull Victor Vasarely-styled cover artworks, a packaging strategy for classical avant-garde music which seems a bit retro to me. Still, let’s hope this is just the start of further releases from the Zinovieff catalogue.