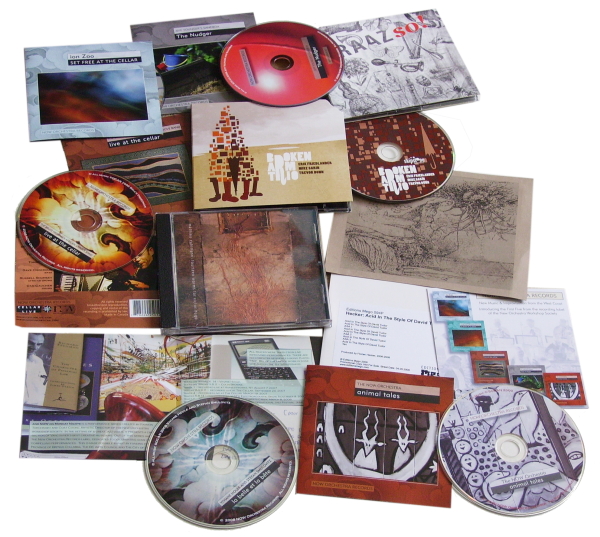 The New Orchestra Workshop Society of Canada has launched its own imprint, Now Orchestra Recordings, and the first five releases arrived in a handy display folder for my perusal. The Society has been going for 32 years, and it’s encouraging to see they continue to receive moneys from various Canadian art-funding bodies (unlike the situation that prevails in the UK, I’m sorry to report). Good to hear some improvised voice music from ion Zoo, where the voice of Carol Sawyer is set against low-key bass-piano-sax improvisations on Set Free At The Cellar (CLNOW001). Viviane Houle also lets her voice run free on La Belle et la Bête (CLNOW002), a record she made with Stefan Smulovitz who plays the “Kenaxis” program on his laptop in real time. Houle warbles and scats like some demented cross between Yma Sumac and Slim Gaillard, but also does the Phil Minton thing of squeezing non-musical grunts and sighs from a closed larynx. The Bruce Freedman African Groove Band perform lively lilting stomps on Live At The Cellar (CLNOW003), using two bassists and two drummers to establish irresistible rhythms, while the accordion of Tyson Naylor connects these pieces to township music. Jeff Younger’s Sandbox are a five-piece playing brass instruments with bass and drums, while the leader operates his electric guitar and electronics in free atonal ways on The Nudger (CLNOW004), a title which may appear unfortunate to UK ears, but as the Sandbox part of their name suggests, this combo are engaged in innocent experimental play. Lastly we have The Now Orchestra, showcasing a selection of their live recordings from the last 2-3 years on Animal Tales (CLNOW005); the Orchestra, active for over 20 years, is a large-scale unit on the order of the Globe Unity Orchestra in Europe, and they play semi-composed pieces which have mostly emerged from the pen of Coat Cooke, the executive producer of all the above recordings.

If this has whetted your appetite for contemporary jazz and the sound of brass instruments, may we suggest tuning any available ear in the direction of Austrian quartet Braaz, whose So! CD (ZACH RECORDS ZACH006) features 19 lively concoctions where the sax of Werner Zangerie is pitched against the scratchy guitar of Gigi Gratt, while the rhythm section veer from rock to jazz and back again. In places they can resemble a slightly more user-friendly Henry Cow, but I think their true roots lie with something like the Willem Breuker Kollektief. Braaz’s aspiration is to “flirt with many different styles of music”, hence they feel as comfortable with reading scores as they are with producing freely-improvised noise-based meanderings, often using Werner’s growly bass tones as a foundation.

Meanwhile further contemporary jazz emanates from America in the shape of Erik Friedlander and his Broken Arm Trio (SKIPSTONE RECORDS 003). This talented cello player has here made a very approachable and warm record with the help of Trevor Dunn and Mike Sarin; the trio clearly feel comfortable together, they leave lots of space for each other, and the vibe I’m getting so far reminds me of some favourite records by early Ornette Coleman groups, or the record Eric Dolphy made with Mal Waldron. The title is taken from an anecdote about bassist Oscar Pettiford, one of the few jazzmen to have used the cello, which according to Friedlander is “an untapped resource” in jazz.

Mathieu Ruhlmann is a low-key performer who veils himself behind quasi-philosophical titles for his projects, which more often than not are illustrated with mysteriously textured artworks which look like details from paintings in a contemporary small gallery. Fourteen Worms for Victor Hugo (GEARS OF SAND RECORDINGS GOS 46) contains a suite called “The Shortest Path from Pebble to God” in seven movements, a rumination on the dilemma of the Christian scientist which unfolds gradually in the form of gently-rumbling and very small sounds. He derives some of his elements here from field recordings of insects and stones; he often has the same ear for out-of-focus, unnoticed detail we find in the work of Loren Chasse. Worth spending some time with this piece, which while largely unobtrusive, is charged with meaning.

The new release by Hecker is Acid In The Style of David Tudor (EDITIONS MEGO eMEGO 094), a full-length record of astonishing electronic music of which six out of the ten tracks have the exact same title, and which arrives with a 16-page essay written in full support of the project by by Robin Mackay. Said essay is packed with jargon such as “hypersemantics”, “foreclosures”, “paradigmatic examples” and “material causations”, which may be what we should expect from the editor of Collapse, a high-powered academic periodical about philosophy. The record is a concept piece which is trying to make connections between electronic dance music from “hedonistic rave culture”, and 20th century composition as manifested by the great David Tudor (who is famous for interpreting many Cage pieces, but also developed his own uncanny electronic devices which nobody save himself could understand how to operate). Florian Hecker makes use of a Buchla synth and an old analogue computer to achieve the histrionic results, which assault your ears with gloriously untuned and impolite electronic raspberries. You can chalk up this bruiser as another noise-laced Mego success!