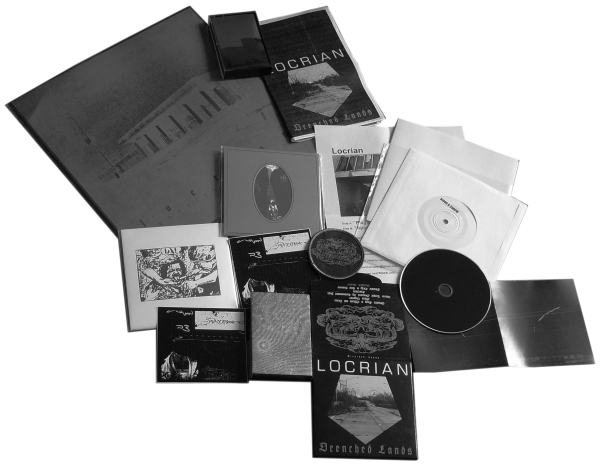 Two choice parcels of American underground noise hath descended upon this grey isle, confirming the view that even though summertime has officially begun we are still beset with many ugly demons and unknown monsters. From Chicago, the duo known as Locrian have laid out their wares which so happen to manifest in many formats. First spun was the LP Greyfield Shrines (DIOPHANTINE DISCS #13), a single long doom-werk spread over two sides of a grey marbled vinyl dish. On it, the guitar and synth of Foisy and Hannum work evil magic in slow, deliberative ways, suggesting the inexorable onset of menacing forces. This impression is endorsed by the appearance of their logo, a hideous chimera of animal skulls and tidal waters collaged into a symmetrical cloud, invading otherwise peaceful locales depicted on the record labels. In fine, this is an extended crescendo of growly, whiney noise that can bring strong men to their knees. Good as it is, I find myself more drawn to the 7-incher pressed in white vinyl, Plague Journal c/w Apocryphal City, Portents Fallen (BLOODLUST! B!089), of which both sides of deliver their statement concisely yet with lasting impact. On the B-side, its tape-loops mutate into a lock groove. The CD, Drenched Lands (AT WAR WITH FALSE NOISE ATWAR053 / SMALL-DOSES DOSEFORTYTHREE), is their new release which contains further guitar and organ mutations, some of them verging on the melodic, packed into an hour-long suite. Their sluggish sound may not be anything massively innovative, but I’ve a soft spot for an organ that actually sounds like an organ (many fear its gothic connotations), and the determinedly relentless way with which these young demons unleash their eerie noise. I’d like you to note the front cover’s combination of Black Metal-type imagery (pentagonic outline and gothic type on a black field) with the photography of bleak urban landscapes, shuttered with an aesthetic sense we haven’t seen since John Thompson’s work for Pere Ubu. 1000 copies were released, and you even get a cloth patch with their logo you can attach to your leather jacket (or ceremonial blood-letting robes). Also received: a cassette from last year, Exhuming The Carnival / Burying the Carnival, not yet auditioned.

From the Phaserprone label in Baltimore, we’ve the tasty new release from Borg, who use drum machines and low-end synths to concoct evil, minimalistic non-dance music. IA (PPR15) is embossed with a shocking front cover image depicting a prisoner about to lose his tongue at the hands of what I presume are torturers from the middle ages; as fate would have it, Borg also lack a tongue with which to sing, preferring to express their pessimistic visions through explosive instrumental synth tones and hammering beats on untitled tracks. I’ve noted before how many of these Phaserprone releases embrace a very full-bodied analogue synth sound, which can be a welcome alternative to the clean precision of many a European wispy-drifter with his overly-manicured laptop. The split CD by Grasslung and Pulse Emitter (PPR 14) arrives in a oval-shaped window-mount cover, revealing an old engraving of a dismal scene – a winged monster with one eye brooding at the bottom of a craggy, stony valley. Slow and formless electronic sounds pour out of the speakers like writhing snakes, conveying cold sensations of doubt and disbelief. The cassette by Monsturo, called POB-66 (PPR 016), didn’t do much for me when spun during an afternoon of sickly sunlight, but now in the gathering darkness of evening its vacant rumbling tones of desolation feel just right, as I prepare to explore another mental wasteland. The card slipcase to this release seems to depict a part of the cosmos as yet unprobed by the astronomer’s telescope. Sadly, the edition of 100 copies is already sold out.