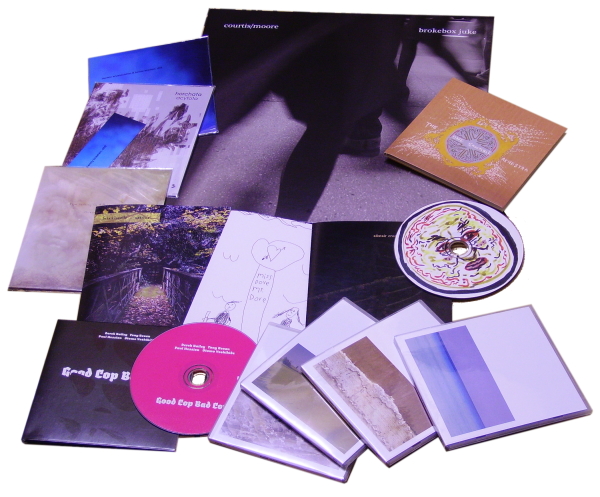 Three fine items from the NO-FI label in the North of England, which is emerging as an underground imprint with a strong identity and good international range of music on its small but select roster. The LP Brokebox Juke (NEU014) is a joint effort by Anla Courtis and Aaron Moore (from Volcano The Bear). Anla’s been noteworthy for electro-acoustic projects of late, but this LP reminds me what a good performer he is in acoustic mode, when he gets a stringed instrument or indeed any shaped piece of wood and wire between his flexible yet wiry South American paws. Moore’s oddball melodic contributions are not to be sniffed at either, and although there’s a huge range of stringed, percussion and keyboard instruments on offer, what emerges is a crisp and clear sound as fresh and airy as if Rudy Van Gelder had recorded it just yesterday. (Some Norwegian players could have picked up the same combinations of instruments and emerge with a droning acoustic quagmire). To my surprise, the press release tells me Moore and Courtis never met up on the physical plane for this project, which emerged by virtue of soundfile swapping and clever editing; although they did tour the UK as a duo in February.

The One Ensemble Orchestra‘s Other Thunders CD (NEU013) is a candidate for headscratcher of the week – not that this all-acoustic instrumental music is especially weird, but I can’t credit how good it is; there are such strong performances on here that remind one of a cross between the (early) Michael Nyman Band and the 1970s folk-rock ensembles of Ashley Hutchings. Daniel Padden appears to be the visionary leader and musical director of this exciting project. Again, like the LP above, there’s a splendid clarity in the recording and the playing that gets my pagan juices flowing faster than any murky acoustic drone-out stoned strummers from Lexington or Atlanta. What sumptuous mixed chords! I hope to find more time to spend with these warm clarinets, taut viola strings and rugged choir sections; this release may be further evidence of strange new modern folk forms emerging in the UK, and flowing in underground streams beneath our very feet. Recommended!

No-Fi have also issued a posthumous Derek Bailey document of no small value; Good Cop Bad Cop (NEU011) finds the founding father of improvised guitar playing with Tony Bevan and Paul Hession, plus the outre antics of Japanese genius Otomo Yoshihide. If you like Bailey with an electric guitar (as I do), then you’re in for some pleasurable moments of atonal growling stabs on the livelier cuts, like ‘Morse’. On the whole though the performances feel slightly subdued; Otomo only really comes to life on ‘The Bill’, a piece where he plays I know not what against the drumming of Hession, but he does it with much fire and energy. Recorded in Liverpool in 2003 at a Frakture event.

Subtle and imperceptible droning electronic and field recordings abound from AFE Records in Italy. The new batch of releases, all packed in postcard wallets, includes an hour-long mystery piece of odd twitterings from John Hudak on Miss Dove Mr Dove (afe102lcd) and a loving pastoral-themed suite from Scotland’s Brian Lavelle, whose Ustrina (afe106lcd) suggests that the rustic paths of a forest are a gateway to spiritual illumination. Also out, CDs by Daniele Brusachetto with Benny Braaten, Horchata, Fhievel and Alistair Crosbie, whose music for shipwrecks has an evocative photo which may be the barnacle-encrusted railings of The Titanic.

It seems to me I was just recently wondering out loud what became of the Bowindo Recordings label in Italy. Now four new releases have arrived, along with a letter from label boss Domenico Sciajno, in which he confirms that the last release was in 2006, fully three years ago. He also urges me “please don’t make a collective review…you don’t need to listen to them all in a short space of time”. I shall therefore make only the briefest of mention of Doves Days in Palermo (BW09), in which the good Mr Sciajno plays duets with Kim Cascone, Robin Hayward, Andreas Wagner, Thomas Lehn and other prominent European improvisers known for the “reduced improv” mode, and it appears to be a nifty combination of acoustic playing with strange electronic music. All four releases are packed in artworks that find abstract-impressionism in photographed details of nature. This label has intrigued me in the past with its taciturn, low-key releases, of which neither the music nor the packaging explained anything.