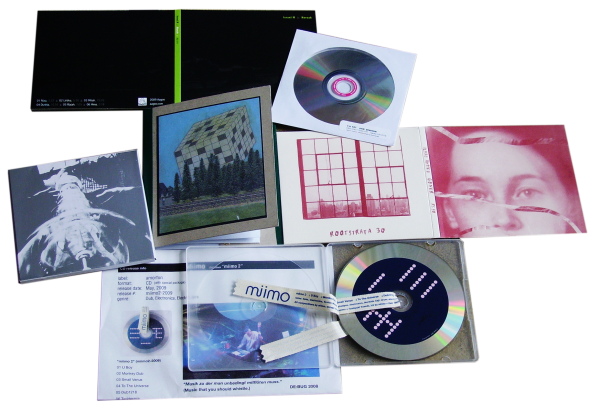 A solo record by Andrew Howes, Carrion hors d’oeuvres (LEEP/CJC JOHNC0032), finds your man Howes working hard as a one-man avant rock band playing bass, drums, keyboards, guitars and electronics. These seven klanking instrumentals, in places somewhat reminiscent of Can or Neu!, feel as though they would have felt right at home if released in the 1990s on Sonic Boom’s Space Age Recordings label; although Howes doesn’t make quite the same fetish out of his synthesisers, which here simply provide one more instrumental colour. A hand made cover depicts a threatening crossword grid in 3-D, looming over a park.

Mexican experimenter Israel Martinez has released Nareah (AGO 019), which arrives from Aagoo Records in New Jersey. Martinez has been producing computer music under his Israel M monicker since 2002, and this very ambient record purports to be a journey across a desert of the mind, filled with the introverted sentiments of he who undertakes said journey. Judging by the cover, said journey also mostly takes place under cover of night, perhaps to escape the shine and sheen of an ungracious sun.

Next, two releases from the Californian Root Strata label, with our gratitude to Jefre Cantu for sending them. Zach Wallace purchased wine glasses from a charity shop to produce Glass Armonica (ROOT STRATA 46), a very tasty collection of lightweight swirling drones and overtones. Intriguingly, he built the instrument in a multi-player version, following an 18th-century design by the famous American politician and inventor, Ben Franklin. The cover photograph on this 500-copy edition is certainly arresting; it looks like a still from a post-modern cinematic update on the Frankenstein story. American player Wallace is also in the duo Sun Circle with Greg Davis, and this sumptuous record – quite some way from being “minimalist” – is a very pleasant little treat.

Ilyas Ahmed‘s Goner (ROOT STRATA 30) contains eight songs, exceptionally fine and powerful examples of distorted acoustic mesmerism, filled with totally impenetrable voices singing equally impenetrable lyrics – yet they seem to convey enormous amounts of information nonetheless. Apparently this unique singer has been extremely active with a number of small-run CDRs already to his credit; this is the first I heard of him, but press notice indicates he’s already moving on from his past identity and re-establishing himself as some sort of tribal, mumbling hybrid of Leonard Cohen and Bill Callahan, backed by missing players from Sebadoh. With titles that allude to many “invisible” elements in life – blood, twilight, shadows and breath – I’m already gaining the sense that Mr Ahmed is a cryptic prophet with a very rich private life, which he can only share with us in glimpses. He makes Dredd Foole seem positively mainstream in comparison. Very nice textured card gatefold pack on this 1000-copy release.

From Japan, another record on Yoshio Machida’s amorfon label. Miimo are a trio of players producing the sort of very precise electronic pop in ways which, it seems, only the Japanese can do; it’s a leaner, fitter, miniaturised version in every possible way. You’ll find this very electronic record Miimo 2 (AMORFON MIIMO2-2209) packed with clean synths and ultra-perfect programmed beat-boxes, and the trio experiment with various exotic rhythms borrowed from Brazilian, Portuguese, African and Caribbean steel-pan music – even dub music. Indeed the record is described as “pop-electro Dub”. Fans of heavy roots dub music, such as that of King Tubby, might find the Japanese take on the genre a little alien, but it’s well worth persevering. Mostly instrumental and very enjoyable – apart from the tracks with the naff voice vocoder. The special package to this one prints track titles and credits on a cloth ribbon, inserted through the hole in the CD.

In a superficial way, Miimo might share some commonality with SND, whose Atavism (RASTER-NOTON r-n 107) is an ingenious and highly cerebral exploration of techno music rendered as pure digital tones in a very minimalistic way. Like Miimo, SND are all about precision and a very clean finish – taking it to the point of producing an extremely dry, antiseptic sound. However, SND also push things to a certain limit well beyond entertainment on this, their fourth LP – testing the listener and themselves to see how long we can endure these brutally simplistic, unwavering rhythms. Handclaps, beats and high-hats are all expressed as pure digital tones, completely lacking in humanity, and perform their impossibly-perfect grid-rhythms with the relentless logic of a software program. Just great! The card wallet to this release also looks very nice from the photo, another example of this label’s modernist design principles, although I’ve only got a promo copy sans cover. Not that I’m complaining of course.