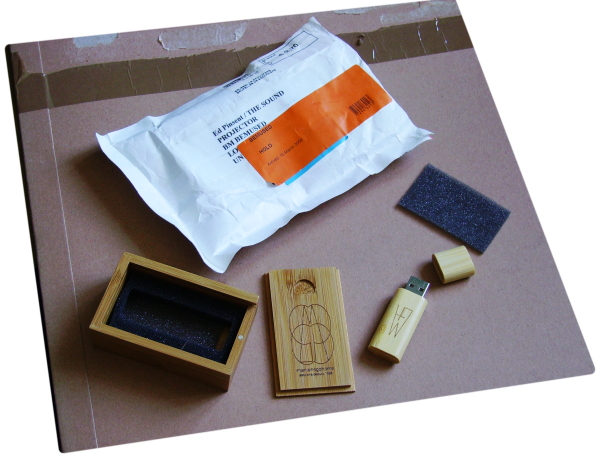 From Brussels, this little bamboo box arrived. Inside the box is a USB stick, also covered with bamboo. On the stick are ten hour-long tracks, roughly the equivalent of 10 CDs of sound and music created by martiensgohome, an improvising electronica and sound-art collective. We know next to nothing about its membership, but they have collaborated with numerous well-known international performers, and creators from fields outside of music such as cinema, video, dance and visual art. There’s also a folio of nine photographs on the stick, which suggests our martiens compadres favour the laptop as their weapon of choice, although there may also be some malarkey going on with attaching contact mics and filters to anything that moves (or anything that doesn’t) to produce sonic effects. Their main dissemination method is radio, and if their claim is true they’ve been occupying a certain portion of Belgian airtime for a very long time with near-continuous broadcasts; they’d like to pitch themselves occupying some twilight turf midway between music and radio drama. I’m excited about the package, which seems a very elegant and distinctive solution to containing and distributing a large volume of musical material (and there’s more where this came from, apparently; they hold an archive of 600 hours of sound which covers the last ten years). A box like this is one credible alternative to uploading mp3s on the web, and still results in what the retailers call “tangible product”. I wish I could get more agitated about the actual music, which so far strikes me as rather uneventful and langourous, accomplishing little in its endless amiable sprawls. On the other hand, it’s certainly not unpleasant to listen to; and if we all had this as a continual soundtrack to our day instead of the aggressive racket that is force-fed to us in most urban centres, the chances are we’d be a lot friendlier to each other. martiensgohome say they want to evoke “a celebration of the sound spectrum, from the roughest noise to the tiniest resonance”, which is arguably an approach we can all agree with.