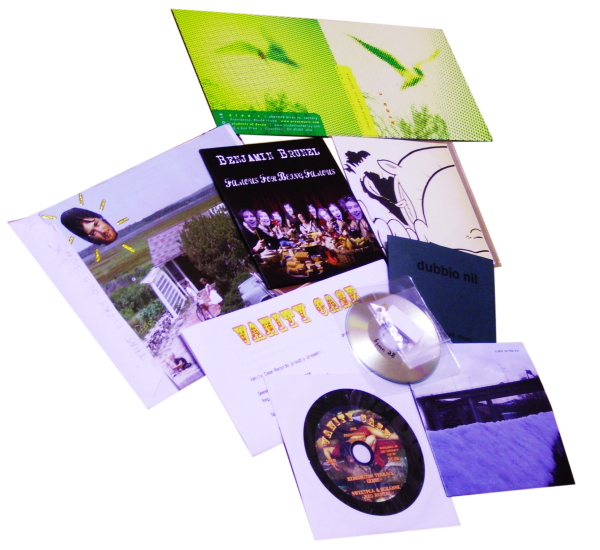 One of Rhode Island’s finest solo acts, area c has surfaced with a new electronic record Charmed Birds Vs. Sorcery (STUDENTS OF DECAY SOD-18). First impressions are that he’s going for a more processed sound than I recall from his Last Visible Dog releases of a few years ago, but there’s plenty of complexity and layers in these sweet-sounding escapades. Crisply-recorded guitars vie for attention with digital glitches; on ‘Spell of Resistance’ the creator appears almost hypnotised by his own focussed efforts. The title track is an epic, over 21 minutes of languid drone and noise-lite.

The Truth About Frank produce a species of dessicated, minimal electronica on which I find it hard to get a purchase. They’ve contributed to an ongoing series called 14 Versions of The Same EP, of which I hold Volume 11; those intrigued can download this music for free from the Long Division With Remainders netlabel. The description of this project, making reference to “basic electronic fumblings” apparently being reprocessed by anyone who turns up and shows an interest, doesn’t fill me with much confidence, although Leeds-based The Truth About Frank does offer some moments of urban bleakitude.

A very charming oddity from Benjamin Brunel, whose Famous For Being Famous (NO LABEL CD) is a collection of odd pop anthems, packed with dense and complex lyrics, and sung in Brunel’s winsome tenor voice against an orchestral backing. The fact that said orchestra probably only exists on a hard drive, comprised of multiple samples carefully put together alongside keyboard lines, matters not a jot; the work is immaculately crafted and blessed with a very polished production. The title track put me in mind instantly of Sparks, one of my all-time favourite recording acts, though Brunel does not attempt to emulate the studied histrionics of the great Russell Mael. (In fact his preferred model may be Joanna Newsom, to whom one song is dedicated). Mr Brunel kindly sent this item with an original hand-made collage pasted on the back of the envelope indicating his Louis Quatorze sunlike qualities, and a witty press release that fantasises about his international pin-up status. The front cover suggests, like the songs themselves, that darkly orgiastic feasts are imminent for the listener. Very mannered sound, but distinctive and original; this is a good one!

Another CDR from microlabel HYMNS in Gainesville, last heard from in March this year. New release is seed, fruit, thorn (HYMN 28) by dubbio nil; 16 minutes of music and sound it be, stitching together synth drones, acoustic guitar ripples, low-key noise and field recordings into a vague miniaturist ambient suite of philosophical ruminations. Loosely inserted inside the green card wallet is a small seed in a tiny plastic bag, along with a printed message of horticultural instructions; this nature-themed semi-conceptual release stops some way short of Ian Hamilton Finlay’s league, but it’s in the same ballpark area.

orfeo 5 would like to propose A Year On The Ice (THE WORD HOARD whcd003) on their excellent new release of live improvisations, sent from Halifax. The duo of Shaun Blezard and Keith Jafrate play saxophones with live electronics in winning combinations, restrained yet packed with information; they explore their own interior landscapes as much as they limn the craggy geography of West Yorkshire in sound. Bravely opening with the testing and lengthy title track, which sprawls across 21 glorious minutes of meandering parping and ambient sounds, this is a CD which will do much to slow down your body metabolism in sympathy and thus enable you to perceive exciting micro-events taking place in wintry situations. If Jafrate’s sax sometimes veers a little close to the “tasteful” in terms of implied chord structures, the stern minimal murmurings of Blezard keep such sentimentalism in check. The 4th cut, titled ‘Biography of a Bird’ discloses their Magritte-like surrealist tendencies towards gentle, lyrical poetry.

From another part of Yorkshire – Leeds – comes a split 7-incher, which I have received pressed as a promotional CDR. Geese performs ‘Kensington Terrace’, a moving song performed with piano, woodwinds, and the gorgeously nasal singing tones of an unknown Yorkshireman. This valedictory anthem is laced with lyrics of near-despair and fatal misery, yet is undercut by subliminal musical doodles that are almost comical; you won’t know where to put yourself. (I seem to recall getting an amazing full-length oddity from Geese some years ago, about which I still remain in the dark). Reg Pantal sings ‘Sweetpea and Suzanne’, a piece which in both name and tone is not far away from the early recordings of Leonard Cohen. This gentle song is reflective, speaking of memories, hopes and dreams; acoustic guitar with the piano backing of Tom Turner. Vanity Case Records sent this fine item, available in limited quantity on vinyl as VC-02; both songs have a timeless quality, and could have appeared on Vertigo or Harvest in the 1970s. Very good!