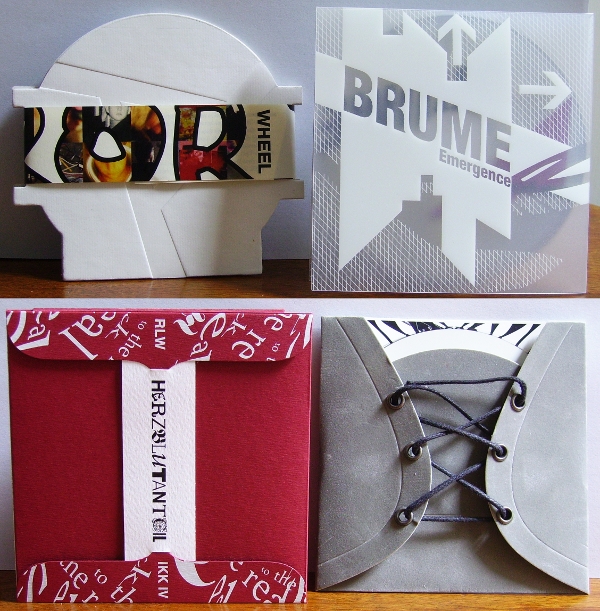 The Russian Waystyx label has sent another four releases all graced with their stand-out packaging, which takes hand-made CD wallets to a level of quality and imagination which few have surpassed. RLW has put out Herzblutanteil I.K.K. IV (WAYSTYX 47), which is another instalment in his ongoing project to remix and reshape a popular German Christmas song as rendered by his daughter. We noted IKK – Purpur in this series when it was released by SIRR in 2006. I find to my chagrin I have missed the two intervening releases, but this one (released in November 2009) gives us contributions from Brume, Formanex, Anla Courtis, Dustbreeders, Intertronik, Howard Stelzer, and other prominent international tape’n’noise merchants, all engaged with the process of revisiting the innocence of a child’s view of Christmas and extracting from this source much alien darkness and nightmarishly unnatural sounds. A chillingly beautiful collection which boasts RLW’s usual strict quality control; not an ounce of fat on this Christmas goose. The Christmas-card wallet unfolds to reveal typesetting in the outline of an angel, and a window-grid containing all the notes in the form of cut-up slices of card. ‘Don’t wish me a merry Christmas,’ snarls the misanthropic Howard Stelzer in his sleeve note, ‘I won’t have one’.

French electro-acoustic rebel genius Lieutenant Caramel informs us rather gloomily that Street Noise Penetrates My House (WAYSTYX 46), on a fine collection of tape-debris mumbling and rattling excess which arrives packaged in the form of a lace-up shoe, complete with a shoelace and a suede finish. I’m going to send this to my bootmaker in St James’s so he can unlace it properly, since doing so is the only way I’ll be able to access the intriguing sleeve notes and psychedelic black-and-white pattern inside. The music, which includes ‘Variation on a Lost Horizon’ and ‘Dialogo Con Luigi Russolo’, is quite some way from resembling street noise; it’s full of queasy and unsettling sounds, strange voices, and non-musical twists, all painstakingly assembled and clashed in exciting ways, creating that miasma of unreal and disorienting experience which Lieutenant Caramel has made all his own. This guy was a revelation to me when I heard that double-CD compilation on Monochrome Vision, so it’s a delight to find more of his excellent work.

Slightly easier to open is the fine double-disc compilation The Wheel (WAYSTYX 39) by Maeror Tri, which gives us a generous sampling of this project’s electronic and semi-industrial music from 1988 to 1996. Many of these twenty tracks originally appeared on cassettes and CD compilations, now mostly out of print; there’s also some unreleased material here. This German trio apparently used only electric guitars (with plenty of effects) to create these droney ambientscapes, although voice work does surface from time to time in these murked-out mixes. Their penchant for Teutonic gloom may make for oppressive listening at times, but at their best it’s clear that Maeror Tri crafted their work with patience and skill, and achieved many distinctive sounds of their own. The package for this one comprises two pieces of very sturdy thick card die-cut into wheel shapes, one of them embossed with the band’s famous tri-partite ‘glyph’. The set is bound up by a strip of coloured paper held in place by a circular paperclip.

French emperor of fogged-in ambient electronics Brume has released Emergence (WAYSTYX 65), a set of two discs which the creator hopes you will play simultaneously to achieve more of the intended effect, including some ‘dephasings’. This is a reissue of a 1990 work originally put out on two cassettes by Old Europa Cafe. Not quite as sonically rich as other Brume releases which I have heard, Emergence comprises a series of abstracted watery bubbling noises overlapping in weird ways, filtered through light touches of post-processing and treatments. It may have existed as an installation piece, in which context it would probably make a bit more sense. A foldout pack with artworks printed in white on clear vinyl, where the discs are clearly marked ‘Source 1’ and ‘Source 2’ in a clever bilingual pun which might refer to pre-recorded source material, or to the French word for a spring. I see Brume has a entire slew of his earlier releases available in remastered form from Waystyx, so maybe it’s time to get busy with the PayPal button if you’re a fan who needs to scoop up these very limited editions.