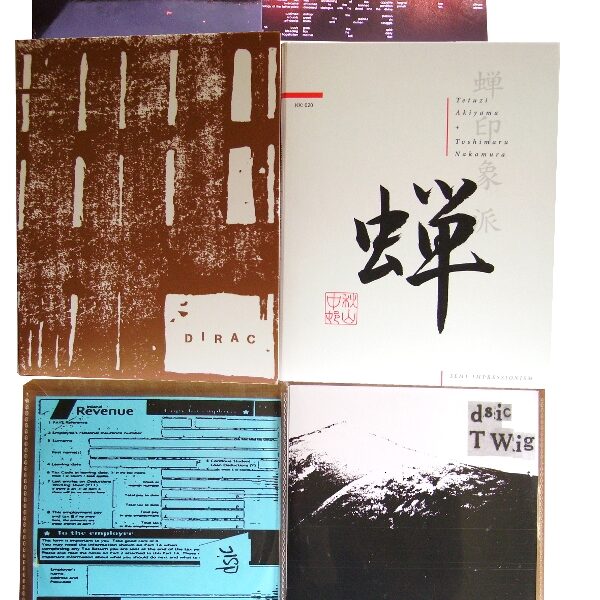 From Paris, we received a CD from the French combo P.H.O.B.O.S. who make a decent attempt at realising a studio record that is intended to appeal to an audience of frowning grim-faced listeners besotted with noise, black metal, industrial and doom. The resultant Anœdipal (MEGATON MASS PRODUCTS PIKADON001CD) is not too bad, belting us sideways with six lengthy tracks of guitar-based excess and misery that usually start out atmospheric and foggy before erupting into full-blown creaking hate and venom-spitting racket delivered at a sluggish pace. What with the generous welter of layers on offer (voices, guitars, drumming, noise effects), it just feels like they’ve over-egged the pudding, and half the force of their brutal anguished thrusting is lost in amongst the need to create dynamic studio ranges. No denying the energy they’ve expended onto the tape, but the music feels rootless and meandery, and the record is ultimately a flat and monotonous listen, thrashing about as it attempts to lift itself out from its narrow sound-world. The full-colour booklet will also impress you with its surfaces; the artworks by Stefan Thanneur are astonishing mixtures of found graphics, photo source material, and wild colour effects, saying everything possible about the mutilation of the human body and the overthrow of Christianity by powerful forces, but (like the CD) doing it all in a rather oblique and intellectual way.

Three Austrian musicians make some quite nice melodic droning minimal music as Dirac on their Emphasis (SPEKK KK021) CD. Four days of recording in a basement have been edited down to just four tracks, working under snowy conditions which may have helped shape the essential stillness of these Eno-influenced ambientwerks. Much to their credit, it seems they tend to put everything down in one take and without overdubs, adhering to the principle they call ‘direct recording’.

An excellent document of Japanese minimal improvisation is Semi-Impressionism (SPEKK KK020) by two greats in this area, Tetuzi Akiyama and Toshimaru Nakamura. Akiyama is the very versatile guitarist who is constantly rising to eclipse many other pretenders who pick up the six-string, but who cannot match him for sheer understated concentrated power. Three tracks recorded in Sweden and Austria, each beautiful episode largely a showcase for Akiyama’s delicate playing which is about as obtrusive as a snowflake falling onto a bed of white feathers, sometimes punctuated by the textured white noise of Toshi’s mixing board. And isn’t the cover just beautiful? It took three people to design it, one to do the calligraphy, one for the drawings, and another to design the package. There’s an interesting anecdote behind the title which can be read in full here; as to that, I do have to give maximum credit to Toshi for expressing his exasperation at our careless use of the word ‘Zen’, but doing it in such a restrained and polite manner.

Another fine package of grumbly electronic mayhem on CDRs from the lf records label in Bristol, owned and operated by Greg Godwin who also records as dsic, one of my favourite discoveries from last year. dsic’s twig (lf010) is packed with a rich variety of angry barks, shrill grinding tones, low-bass throbs and crazy mixtures of samples with uncontrolled electronic noise explosions, all of them very suggestive of a deeply unhinged and unhappy frame of mind. One of my hobbyhorses is how, whenever affairs are going very badly, the government and big corporations put up optimistic posters reassuring us that everything is actually going very well. One example which I personally find intensely irritating is the current Lloyds Bank campaign, whose images of smugly contented investors, customers and bank staff (all rendered as dozy-looking plastic puppets) serve merely to conceal and disguise the current financial disarray in which we find ourselves. Anyhow, if you want to discover the unpleasant truth about modern urban Britain, you could do worse than start with dsic’s front-line reports. dsic has also released P45 (lf009) which is wrapped in a doctored Inland Revenue form, and compiles ten tracks of morbid electric insanity from 2007-2008 in an edition limited to just 20 copies.

On same label, a highly intriguing release by Joinedbywire, a trio from Bath who have been playing some form of guitar-drum instrumental music for seven years. Black Axis 1-4 (lf008) was recorded during an unhappy time after their guitarist Sara had suddenly died, and somehow her presence lingers on a record that is effectively a compelling and abrasive collection of process-music making great and imaginative use of echo and delay effects. The 17-minute final track is particularly layered and confusing, packed with ugly incident; the intended effect on the listener seems decidedly hostile, something to do with ‘aural decimation’, an attempt to abrade your very body out of existence by means of the sonic hatchet and several sheets of sandpaper. Sara (RIP) contributes a posthumous vocal section to the second track, and she sounds positively resigned to the grim fate of the world with her sullen and clipped tones. Another fine record whose strung-out bitterness is very much in keeping with this label’s aesthetic.

Christian Zanési is a young French composer who had his life turned around in the 1970s when his music tutor played him a record by Parmegiani, resulting in an epiphany that caused his devotion to electro-acoustic composition. On Soixante Dix-Huit Tours (DOUBLE ENTENDRE DE2/002), we have two 15-minute suites; ‘Sémaphores’ is a pleasant piece of zippy minimalism which is something to do with reprocessing electronic signals in a highly intellectual construct. ‘Tours et détours en 78 tours’ is potentially more interesting; he derived it from a rare find, a 78 rpm record created by the great Pierre Schaeffer and pressed in 1949. It was just a set of loops of musical instrument samples which Schaeffer used as the source for one of his tape compositions. Here, Zanési works with small fragments extracted from the record, combining them with more modern electronic sounds, and making all sorts of oblique comments on what he regards as the essential qualities of this very unique form of composition, which now seems to be regarded as an important part of French heritage. A delicate and spindly record, but worth giving it close attention with both ears wide open.

All the above arrived in the mangled mitts of The Sound Projector during late November 2009.