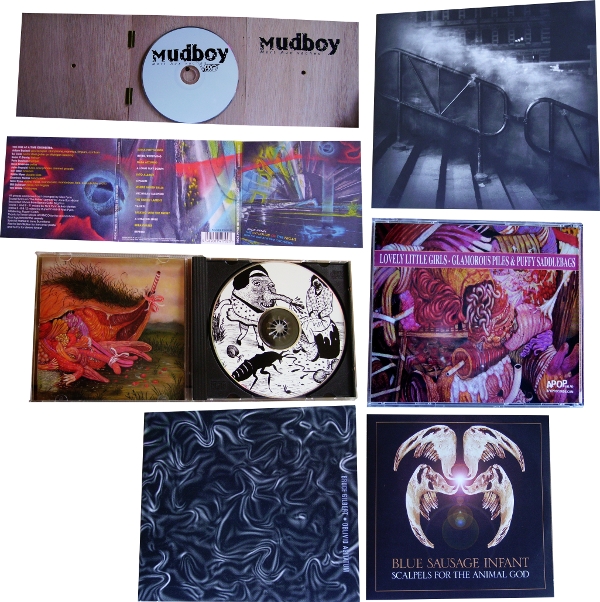 Another splendid Mort Aux Vaches package (MAV 062) which I find has been in the box since October and was released around September 2009. It’s by our good friend mudboy and over the course of five tracks seems to replicate one of his ceremonial live performances for the benefit of the good folks at VPRO radio in The Netherlands. Starting off with bells and secret magic movements to set the scene, the disc contains a cartload of mudboy’s glorious electronic trancey organ playing (with a distorted tone on ‘Osandways’ that is so crisp you could eat it up like a slice of granary Ryvita). There’s also a fair deal of the ‘what’s-going-on’ factor as evidenced on mystery-noise pieces like ‘Beebbub’ which I realise, now I type it out, is only a few letters away from being an incantation of one of the names of the Devil, and features some scary echo voice treatments that warrant filing alongside the most extreme moments of Henri Chopin or Bernard Heidsieck. Plus there’s the closer ‘Shantysea’, over nine fabulous minutes of sheer meandering instrumental beauty from this maverick American loner. The record is packaged in three pieces of hinged wood which I suppose you could unfold and use as a screen in your Japanese doll’s house.

One of the nice surprises from last Autumn was Nick Pynn‘s The Colours Of The Night (ROUNDHILL RHLCD 09), an instrumental CD of compositions by Pynn and played by The One At A Time Orchestra, a small chamber ensemble which includes the wonderful Bela Emerson among its ranks. Very difficult to categorise this lively and warm lyrical music, which seems to embrace all aspects of popular classics, English revivalist folk and folk-rock music (in particular the work of John Renbourn, and Ashley Hutchings), light jazz, the arrangements for Pet Sounds, and many other things – but that list simply gets in the way of appreciating Pynn’s originality. You can gather however that atonality and 12-tone dissonances are the last thing on his mind as he paints these evocative sound pictures with their equally evocative titles. One of the most impressive aspects of this record is that the players didn’t actually meet up, but added their contributions ‘one at a time’ by means of overdubbing (most of the basic foundation had already been recorded by multi-instrumentalist Pynn) and did so in the composer’s studio which is situated above a little cafe in Brighton. A simply gorgeous record results.

Oblivio Agitatum (EDITIONS MEGO eMEGO 096) is another superb disk by the great Bruce Gilbert, whose avant-garde work I personally found a way into via the Ab Ovo record he made for Mute in the 1990s, later enjoying his occasional stints as a live performer at Disobey and other London events when he mixed his defaced and spray-painted CDs at peak volumes to produce uncanny, earth-shattering sounds, sometimes doing it while hidden inside a garden shed onstage. Little did I realise this man has avant-garde roots reaching back over 40 years. I have tried to fill in the gaps in my knowledge by snarfing up a vinyl copy of Shivering Man from the 1980s, a release which is one of the reference points for this eerie spooked-out record; it’s full of long stretches of existentialist doubt and drama rendered as washed-out, unsettling electronic music. The 26-minute ‘Zeroes’ is particularly impressive, making the Dome LPs appear positively uplifting in comparison.

The studied ugliness of American polymath Gregory Jacobsen is slowly making increasing inroads into the interior of the Sound Projector cabin; one of his other projects is the absurd music theatre of Ritualistic School of Errors, noted briefly here in August, and more than once I have tuned into his bizarre and eclectic podcasts which he made for WFMU as Fatty Jubbo. Glamorous Piles & Puffy Saddlebags (APOP RECORDS #030) by Lovely Little Girls sees him picking up the microphone and delivering his twisted lyrical spew in front of a small and very eccentric backing band who play some species of punked-out avant-circus rock weirdness, with jaunty sax and trumpet passages which seem to be completely at odds with the surreal and visceral subject matter and the alarmingly distressed tone of Jacobsen’s thick, manic singing. At the moment I fear to delve too deeply into the content of the lyrics, which may be packed with unpleasant taboo subjects, but for those of you less squeamish than I, the lyrics are printed in full inside the foldout. The lard-dripping intestinal artwork on the cover is also by Jacobsen.

Blue Sausage Infant is Chester Hawkins from Washington DC, and he sent his Scalpels For The Animal God (INTANGIBLE ARTS IA015) in late August 2009. Active since 1986, Hawkins has been turning out numerous releases of this brand of mesmerising paranoid electronic noise, mixed up with bits of samples, guitars, radios, sound effects and assorted detritus. I was interested to note he’s collaborated with fellow Washington resident Violet (i.e. Jeff Surak), whose Violet Ray Gas CD, on the same label as I recall, we have noted in issue 18; and they both seem to occupy roughly similar turf, sharing a relentless determination to explore disquieting and alien territory in a methodical, almost scientific way. Once you get this record glued to your own deck, you may find it hard to pull it off again, feeling yourself drawn inexorably into a devilishly fascinating vortex. Much more structured and intelligent than most ‘dark ambient’ records we have encountered.

Recently we noted a tremendous (mostly) acoustic improv record by the Japanese greats Tetuzi Akiyama and Toshimaru Nakamura; for yet another side to their activity, I highly recommend this record Omni (PRESQU’ILE RECORDS PSQ003) which was made in collaboration with Kato Hideki of Bass Army fame. A de-centred, diffuse, muffled and multi-layered episode of electronic noise, Omni was made using bass and electric guitars, live electronics, a bass synth and a mixing desk, recorded and mastered by Kato in 2008. The work derives from an agreed method where each player prepared long passages of music in advance, without telling the others what they would do. The main event on this disc is a sustained 40-minute bout of chattering, fizzing and bubbling goulash of the sort that I find endlessly absorbing; you could study its detailed micro-surfaces for hours, like a book of illuminated manuscripts from the planet Saturn. Another glorious release from this little French label, whose first two are essential documents from the furthest reaches of ultra-quiet Onkyo music. Totally recommended!