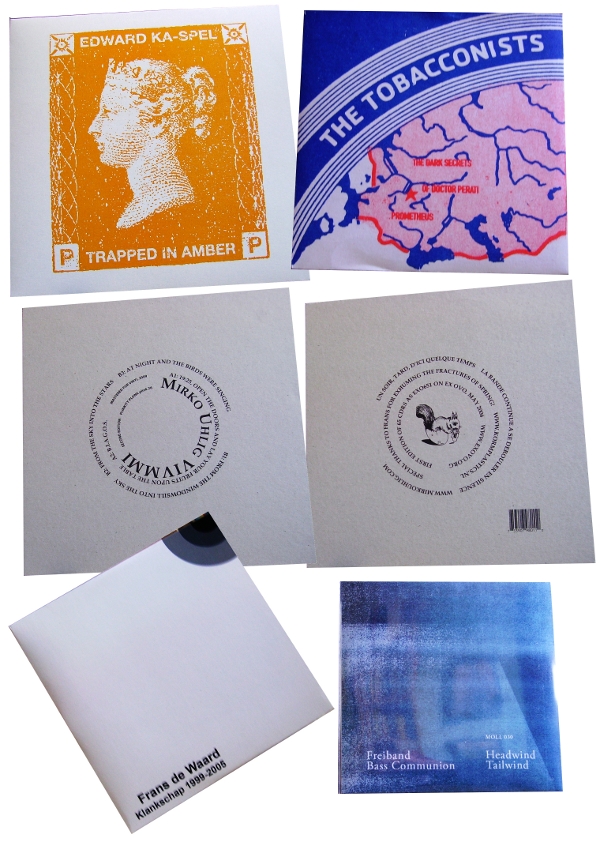 This package of goodments arrived in early December from the estimable Frans de Waard in Holland, representing four of the known current formats employed for musical transmission and also aspects of this tireless man’s creative endeavours as a creator and publisher of sound art. Hearing the LP Trapped In Amber (PLINKITY PLONK PLINK 25) by Edward Ka-Spel turned out to be one of those ‘light slowly dawning’ experiences for this listener, a proposition that seemed unremarkable and unexciting at first which gradually revealed a wealth of interesting detail. Two side-long suites are the title track and ‘Christmas On The Moon’, each suite in turn made up perhaps of two or three separate compositions faded and stitched together with fine skill and craft. Ka-Spel, the principal force behind UK underground heroes The Legendary Pink Dots, fuses romantic piano playing, delicate synth melodies and unusual field recordings together into understated, complex works, which are very like (and I don’t say this lightly) the soundtracks to imaginary films. Especially the first side, with its half-suggested narrative content. The second side has more than a tinge of Harmonium, Cluster and Tangerine Dream woven in amongst its fleeting beauties, while the first side with its street-sounds (dogs, children calling) suggesting a vaguely exotic foreign sunlit land, once again confirms my suspicion that Ka-Spel is becoming the next Paul Bowles, lounging around Tangiers in a white suit as he reflects ruefully on the tapestry of his past years. An extremely listenable and slow-paced LP results, rippled throughout with strange unknowable nostalgic moods.

The Mirko Uhlig LP VIVMMI (PLINKITY PLONK PLINK 26) was originally issued as a small-run CDR item by the Ex Ovo label in 2006 and has been remastered for this vinyl edition of 130 copies. This exquisite work features some of the most delicate and washed-out music I’ve heard in this vein for a long time – not unlike Feu Follet, who have also appeared on Ex Ovo (The Icicle Lectures Vol 1 is superb, but sold out). On the A side’s long track, the ghosts of beautiful melodies are heard from afar, as if wafted towards your ears on a gentle wind, so fragile that they vanish as quickly as the shadow of a cloud. The B side features some slightly more conventional electronic drones, intercut with water effects and other field recordings, but in ways that make everything appear that much more ponderous, as if watching a silver stream move in slow motion. A record full of glacial beauty which I recommend. Note also the magic squirrel image on the back cover.

Klankschap 1999-2005 (ZANG:RECORDS Z:023) is a compilation CD of Frans de Waard pieces showing many aspects of his reworking techniques to great effect. Two real stand-out pieces for me are ‘Klanschap #9’, with its very extreme treatments of water recordings made in Veere; and the mesmerisingly eerie ‘Epitaph’, which derives from materials prepared by the great John Watermann, part of a strand of investigative and collaborative activity which also resulted in the excellent tribute CD Epitaph For John on Frans’s Korm Plastics label. (We noted this great record in TSP #15). I’m also partial to the opening and closing tracks ‘Werkplaats #1’ and ‘Werkplaats #2’ which seem to use light industrial machinery as a starting point. Like everything on this CD, common sounds are transformed in ways that make everything seem unfamiliar, and a huge range of textures and dynamics result.

The Tobacconists is the duo project of Frans and Scott Foust, who toured Europe in 2009 (see here for a report of the English leg). I’d already received a copy of this excellent seven-inch single (PLINKITY PLONK PLINK 024 / SWILL RADIO 031) from Scott as part of another package. Both sides combine tapework with highly ambiguous electronic music to form semi-narrative tableaux, again like fragments from imaginary films. ‘The Dark Secrets of Doctor Perati’ is clearly the more narrative of the two, evoking a kind of film-noire spy movie vibe with an extremely threatening undercurrent; while ‘Prometheus’ repeats the sound of a match striking (presumably something very familiar to de Waard and Foust, as confirmed heavy smokers trying to make the world safe for tobacco wherever they go). From this common household object, the creators spin a sonic statement on the myth of this fire-stealing demi-god. The striking cover design resembles a Baedeker from the 1930s; who knows what strange lands such a tour guide would direct you to?

On the split three-inch CD (MY OWN LITTLE LABEL MOLL 030), Freiband (one of de Waard’s droney projects) offer us ‘Headwind’, a piece using derivations from the guitar of Martin Luiten; this one rattles quite promisingly for the first 2-3 minutes, then starts to transform itself into fairly familiar ambient droning process music. ‘Tailwind’ is a laptop reprocessing of ‘Headwind’, made by the English act Bass Communion; the method here has been to remove most of the interesting frequencies and smooth out all the rough edges, until nothing but a filtered phantom of the original music remains, drifting across the sky almost invisible.