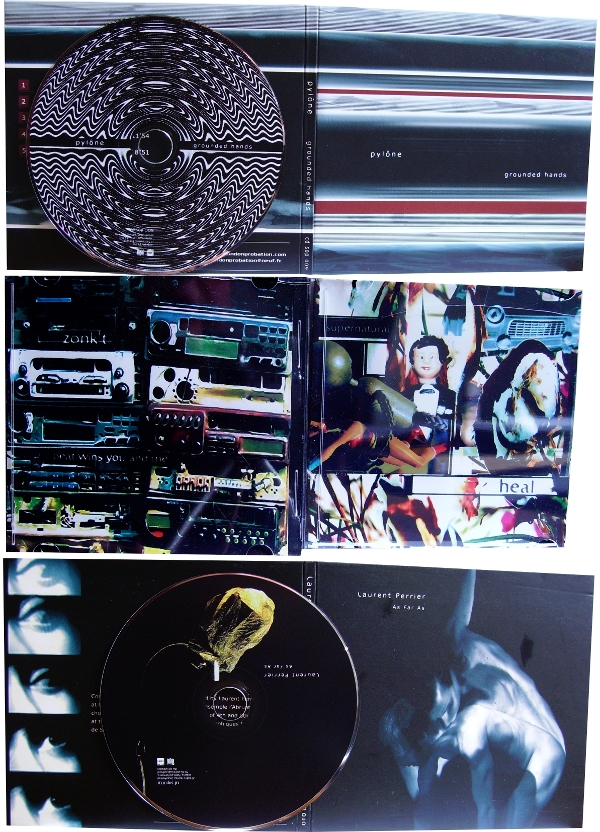 French electronic composer Laurent Perrier is actively involved in film-making as well as making music and sound-art, and runs the Sound On Probation label. All of these releases are characterised by a strong sense of purpose in their music, and a very polished production sound (even when the tone turns to the sinister or the lugubrious). His solo release As Far As (CD SOP 010) was composed for a dance piece by the Alban Richard / Ensemble L’Abrupt, and photographs of naked limbs, torsos and faces all melding into each other adorn the sleeve. The pieces have no title and the album begins boldly with a lengthy 18-minute piece of ambient droning, which gradually becomes more sinister as more small, unfamiliar shapes emerge from the muffled, distorted fog of sound. The remainder of the album is no less sombre, using many sonourous string samples, choir samples and unusual effects in its pursuit of a species of nouveau-classical setting to match this avant-garde choreography.

We noted Pylône in 2006 with his excellent debut Black Grains CD, released on the same label. His new release Grounded Hands (CD SOP 009) suggests he’s pared down his ultra-minimal approach to solemn, brooding electronica still further. The results are like the readout from a flying saucer as it slowly and methodically surveys every inch of the geography of an alien planet, hoovering up geophysical data and storing it inside enormous memory banks. Again, the CD leads off with a long track (‘Sens 3’, at 21 minutes), a strategy which seems to say to the listener ‘Qui m’aime, me suive!’. The creator never relaxes his concentration for a second, gradually drip-feeding additional details to the track and ensuring that it doesn’t collapse into a state of empty process art. Further explorations into dark textures and disquieting moods follow, including the vaguely alarming ‘Malséant’ and the gloomy ‘Dense Des Couteaux’ which, in title at least, implies some sort of death by knives. A black and moody record which is just perfect for the snowy weather we’re wading through this month.

Zonk’t is Laurent Perrier’s alias for producing slightly more uptempo music, as evidenced on the vinyl LP Beat Wins You and Me (LP SOP 012), a record which exhibits a high degree of near-ruthless precision in its execution as its slightly clunky beatbox pumps out mechanical rhythms with about as much joy as a domestic robot slave going about its chores. Both ‘War’ and ‘Pore’, the two opening cuts, are quite aggressive (the second decidedly so), and only the fourth cut ‘Phlegmon’ seems to offer any relief in this otherwise airless and dark-skied landscape. The final cut ‘Glaire’ is especially inventive, experimenting with simple cross-rhythms and complex layers of unusual electronic sounds, to produce a dense aural experience.

For the Heal project, Perrier does the composition, recording and production for a small combo of acoustic musicians who play upright bass, piano, organ, vibes, brass, woodwinds, guitar, strings and percussion. On the LP Supernatural (LP SOP 011), they execute a very professional and clipped species of modern soundtrack jazz music laden with danceable beats, performed with such inhuman precision and dead-on timing that one wonders if the editing suite played some part in the finished item. Which isn’t to deny the excellent playing skills of the numerous musicians. While the crisp beats keep each piece moving along in a brisk way that we don’t necessarily find in Perrier’s more slow-paced ambient work, I still find it a slightly menacing lope, like the stride of a secret agent with a large gun concealed in his black tuxedo who’s on his way to complete his latest assassination assignment. Yes, Supernatural (an immensely enjoyable record, in its way) would make excellent movie soundtrack music, no doubt reflecting something of Perrier’s film-making background. Both the vinyl LPs are limited editions of 300 copies.