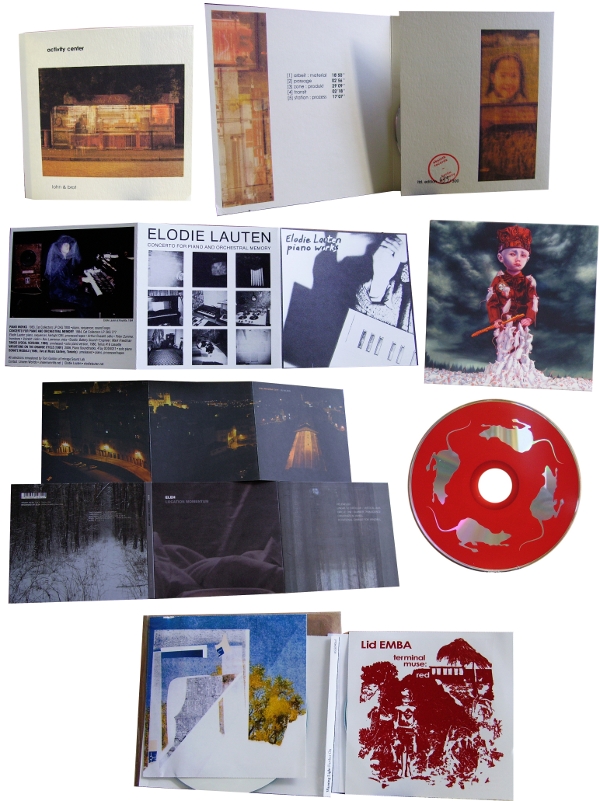 A pleasure to hear once again from Michael Renkel in Berlin. Can it really be over ten years since we dug the Möwen and Moos release from Activity Center, his electro-acoustic improv project duo with percussionist Burkhard Beins? The calendar cannot lie! lohn & brot (ABSINTH RECORDS 017) is the new release to issue from the nimble fingers of these musical watchmakers, a natural development of their work which finds them continuing to hammer, scrape, pluck and blow musical instruments in exciting new ways that completely subvert “normal” musicianship, but now adding electronic devices and computer software to the equation, and doing more of it on the table top. The pair distinguish themselves from one thousand other gosthoons who think that if they pick up a spinning top, cover it with cheese and attach a contact mic to it they’re well on the way to being the next John Cage. This is mainly because Renkel and Beins use their brains, they can actually play and improvise in meaningful ways, and they connect and interact to produce music and sonic effects of the first water. This is particularly evident when you hear them stretching out on the two long tracks here (one of them nearly half an hour in length), where they sustain the music unflaggingly and abundant low-key genius continues to flow from the speakers in unfailing supplies. Enough intricate detail here to keep your mind occupied for many moons as you untangle the skeins of thought. Limited edition pressed in an outsize cream-coloured greeting card folder, decorated with treated photo-artworks by Renkel. Fine work all round.

Beyabbers! More primo material from the amazing Elodie Lauten, the lost NYC minimalist dream-world cinematic creatrix of the 1980s, whose The Death Of Don Juan opera was something of a revelation to us last year. Now Unseen Worlds deliver the goods once again on this terriff double-CD collection Piano Works Revisited (UW05). Disc one rescues two of her rare private-press LPs originally released on her own Cat Collectors label, namely Piano Works from 1983 and Concerto for Piano and Orchestral Memory from 1984. On the former, some taut and crisp work from Lauten playing five gorgeous compositions realised with piano, sequencer and sound loops; her use of electronics and tape is severe and sparing, emphasising the supremely romantic boniness of these evocative semi-surreal explorations, titled with such novelistic epithets as ‘Alien Heart’ and ‘Imaginary Husband’. On the Concerto music, she’s joined by Arthur Russell, Peter Zummo and others, adding strings and brass to her slightly more atonal and complex piano-based works, recordings where the vast Fairlight sampling computer is brought into play, adding a great spectral cathedral-like quality to the overall sound. The second disc contains longer works from 1991 and 1985, one of them recorded live, not yet played at time of writing. I think the label are pretty excited about getting this one together, and with good reason. Will be out next month!

Also from NYC, the composer-performer Geoff Gersh with a CD of sad droney music which he creates with bowed guitars, zithers, tapes and treated field recordings. The music on These Predicaments (DEEP LISTENING DL 42 2009) is specifically intended to act as an aural accompaniment to the gloomy paintings of David Stoupakis, one of which appears on the cover – depicting a very put-upon man-child Pied Piper whose flute-driven project to rid the town of rats appears to be going horribly wrong. I can see why Deep Listening might be attracted to a man who uses metal to bow an instrument (who can forget the 1989 metal cello LP by Robert Rutman on Pogus Productions?). Gersh’s music on the other hand, while accomplished and highly polished, is not as abstract or abrasive as that, and feels a bit too narrative and sentimental for this listener.

More ambient droning from Warning Light, on the American Stickfigure label. Further On (stick040cd) is made entirely with synthesisers whose tones are layered up into a deliberately gigantic cake of sound, its crumbly strata pasted together with sluggish butter-cream. Bits of this work quite well when the player emulates foghorns and Hammond organs, but generally it suffers from the same problems of open-ended formlessness we often encounter in this genre. From same label, the restless and rootless experimentation of the somewhat irritating Lid EMBA can heard on Terminal Muse: Red (stick046cd), an EP which doesn’t know where to put itself as it swaps around and changes styles in reckless fashion.

From the excellent UK Touch label, we have a very powerful minimalist droner in the shape of Eleh, whose Location Momentum (TOUCH TO:80) actually does indeed warrant all the comparisons to Terry Riley, La Monte Young, Eliane Radigue et al which are often glibly invoked by many lesser talents. This is the first I ever heard from the enigmatic Eleh project, which in fact goes back to 1999 and has been well represented with small-run vinyl editions on the American label Important Records. For those who enjoy having their carnal frame gently massaged by deep bass tones and relentless oscillations until your outline starts to turn fuzzy and indistinct, then my advice is to purchase this long-form masterwork immediately and play it at home over enormous speakers. Apparently best practice requires you to sit about seven feet away from those speakers. When you hear the record, you’ll understand why.

The Invisible City is a very suggestive title which might be regarded as one of the subtexts for the entire Touch project; I would suggest strongly that most of Jon Wozencroft’s work as AER is about attempting to capture some glimpses of an invisible city through clandestine tape recordings and judicious collaging. BJ Nilsen‘s new release of this title (TOUCH TO:77) is, perhaps surprisingly, quite spartan in its use of field recordings and has been largely realised through minimal instrumentation (including the exotic-sounding Subharchord), electronics, tapes, computer work, and non-musical activities such as door slams, chair dragging, walking through snow, and – most intriguingly – the sound of dead trees leaning against each other. The field recordings come from birds and insects, among other things, and like Chris Watson’s work for this label suggest there are entire universes of significant events taking place on various levels, which we’re missing out on because we won’t take the time to seek them out. An astonishingly mystical compilation results from Nilsen’s pan-global investigations. For all his minimal technique, it’s one of his more maximal releases, is very varied to listen to, and it poses many wonderful questions about unknowable and unseen things in the world.