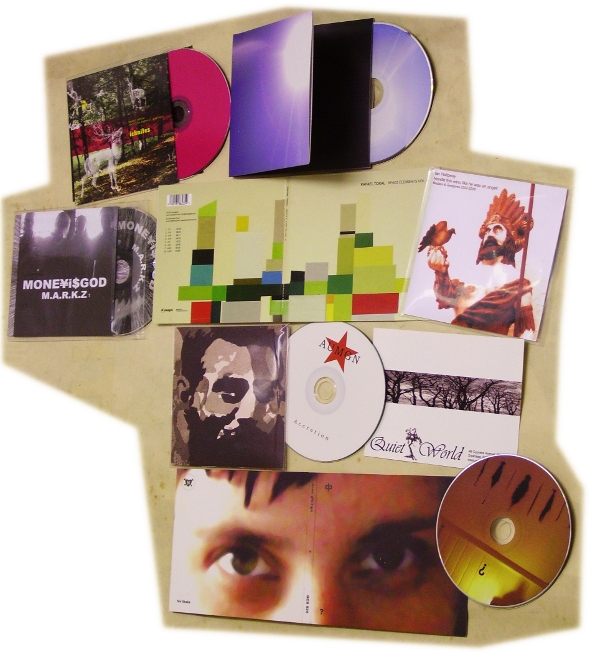 From Tel Aviv, our friends at Heart & Crossbone unleash more sophisticated stoner-sludge noise in the shape of a new release by Japanese underground core-punkers, MONE¥i$GOD. The variety and sophistication of their musical approaches on M.A.R.K.Z. (HCB 027) is damned effective, experimenting with unusual time signatures and dynamics in the combo playing, while at all times remaining true to the snarling and hate-filled intent to devastate and murder their quarry in sound. The dub-remix version of ‘Black Rainbow’ is particularly shocking, enriched with maximum surprise quotient. A powerpack of a disc delivered through the power of raw-meat fuelled intelligence with all the teeth-gritting style of a crazed antelope.

The item by Dave Phillips is a true puzzler, though we should expect nothing less from a release called ? (HCB 026), and the task of bewilderment on a world-wide scale has long been the chosen career path of this experimenting absurdist from Switzerland. Those that have deeper digged than I into the European perplexment conspiracy will be more familiar with the ins and outs of the Schimpfluch cabal. Perhaps uncharacteristically for this label, the release doesn’t contain that much noisy content pound for pound, and instead offers an unfathomable series of mysterious events, aimless instrumental passages, and nonsensical tape cut-ups that will keep you perched on the edge of your toolbox.

Cut Iowa Network are a trio of young men combining a rock-trio set up (guitar, bass and drums) with restrained electronic effects and tape loops, on a full-length release Projector Gunship Held {0,{0}} (CHAMPION VERSION CV201006.01). While not a totally revelatory listen, gotta admit it is something of a pleasure for me to hear music being performed live by a real band without over-much reliance on computer programming. The trio sprawl and shudder like jelly snakes in a fairly diffuse way, occupying sonic space like an ever-expanding sponge, and stretching out their limbs to best advantage on the longer tracks. With titles that reference power sources like propulsion systems, explosions and antennae, the band are keen to persuade us they can soar like mighty jets into the stratosphere, and while they like to press a lot of Krautrock buttons they also remind me of Boredoms, especially on the final quasi-psychedelic track.

On Ichnites (POTLATCH P110), we hear improvised sax noises and non-musical grinderments emanating from motorised rotating surfaces – always a winning combination in anyone’s book. Lebanese-born Christine Sehnaoui Abdelnour sucks unearthly, gritty whimperings from her alto sax, playing with such weightless grace that you can believe her hands never once made contact with brass. Pascal Battus plucks out motors from old portable cassette players, then rubs them whirlingly against common objects made of paper, wood or plastic, creating tones that make you think all the inanimate objects in the world are spending their time whining and complaining, if only we could hear them. Now we can.

Celtic mystic Ian Holloway was last heard from us when he was musing about the fragility of dragonfly wings at the end of last year. On Handle this wino like he was an angel: Baubles & Gewgaws 2002-2008 (QUIET WORLD 13), he delves into a secret folder on his home PC, contents of said folder of a nature and value known only to himself. Said contents built up over time when he was producing numerous albums and tracks as Psychic Space Invasion between 2002 and 2008. On that basis, one might be forgiven for thinking this is just a collection of anonymous computer music, but this little Chinese puzzle is a far more interesting listen than the banal filtered samples and boring processed loops that most creators manage to summon up from their Samsungs. I rather feel Holloway has somehow left a collection of his own mental imprints in the very circuits of his PC, and he needed only activate a few keystrokes to let these strange ideas and impressions come tumbling out.

Most excellent newie from Rafael Toral, whom I previously knew only for his excellent solo albums of processed guitar work. On Space Elements Volume II (STAUBGOLD DIGITAL 5), he’s exploring his collaborative endeavours and working with some topnotch musicians including Manuel Mota and Evan Parker. The instrumentation here (vibraphone, trumpet, percussion, Fender Rhodes) isn’t too far away from what you’d expect to find at any Miles Davis session recorded after 1970, and perhaps it isn’t too fanciful to suggest Toral is attempting a contemporary update on electric free jazz. Of course, this album is far more restrained and abstract than Agharta or Dark Magus, curbing the excesses of free improvisation into a carefully-constructed suite of space-age sounds, with oodles of ‘white space’. On the strength of this, I’d expect Toral to be awarded a pavilion to himself at the next world’s fair where he shows us the living room of the future with its weightless bookcases and music imprinted on little sugar-coated pills. This’ll be out at the end of April 2010.

From Melbourne, Accretion (NO NUMBER CDR) is an intriguing collection of collaged sounds combined with live electronics and guitar playing by Aumgn, a side project of visual artist Jason Beale. A pleasing mix it be: raw and primitive bedroom DIY heavy-metal guitar music interlocks with completely abstract noise, at times creating near-psychedelic mesmerising effects. The guitar sounds like it’s mostly being played at the far end of the neck (in true Tony Iommi fashion), and while his low-end frequencies could maybe use a little beefing up, it’s a convincing bit of work. It’s as though he couldn’t decide whether to model himself on Ron Asheton or Tod Dockstader, and in the end decided on both.