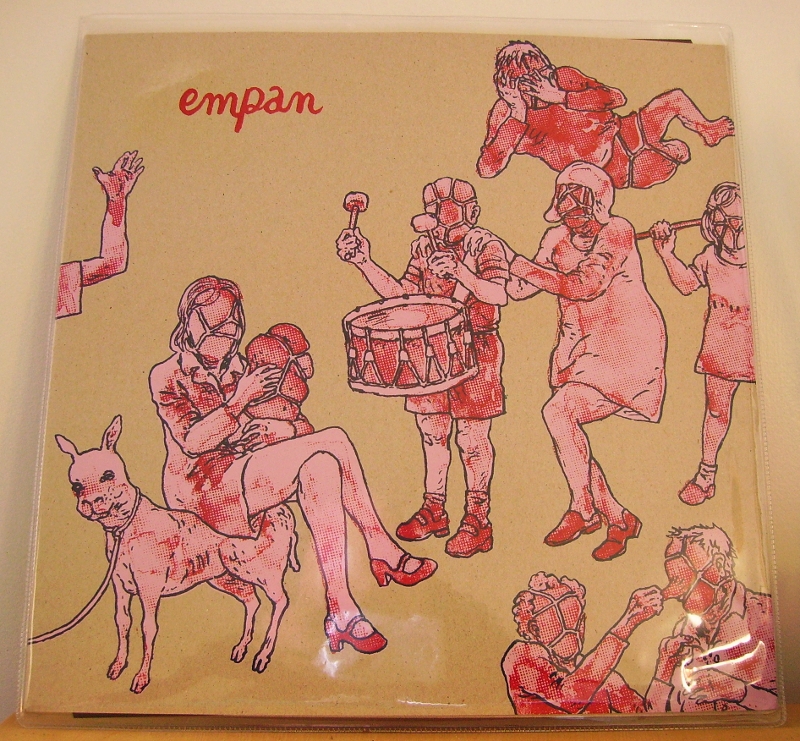 Inward come these Vinyl Vaitrecemonatims, nothing stopping their flight from the pressing plants of Europe and America to line my aural throat like so many multicoloured pastilles. First we have three new platters from Germany’s Dekorder, whose owner Marc Richter is s a man who loves anything that’s crowded, maximal and thick as frozen grapefruit crush. Nary a minimalist or clinical recording slips out from his stampers. Iibiis Rooge (DEKORDER 043) struck me immediately as kosmik klutter of the highest order, souped-up instrumentals supping deeply from the rock music roots but also nourished with golden electronic drones. Of these four lengthy workouts (‘Dancing In The Sun’ occupies all of the B-side) nothing has any real centre or root note you can pin your hopes on, yet it’s possible to immerse my lardy head in these thick broths and come up well-fed and watered. A delightful surprise to learn that Neil Campbell, now calling himself Astral Social Club, is one half of this online collaborative band; the other contributor is High Wolf of Not Not Fun Records. Diffuse inspiring music emerges in a torrential flow from their multiple limbs, a phenomenon illustrated by two fuzzy photo-collage mandalas printed in green on the covers.

The record by King Kong Ding Dong may be construed as evidence of the quirky path currently being trod by many avant-rocksters from the USA. Everything on Youth Culture Index (DEKORDER 041) sounds to me like it was played and recorded “sideways”, by which I mean that youthful imaginations in the studio are so fired-up with experimental derring-do that nothing they touch can long remain set in the “normal” mode. One can also hear post-punk and Krautrock aspirations in these entertaining short instrumental mis-shapes. But it’s mainly non-threatening weirdness from these Philadelphia zanes; those looking for the dangerous and distorted attack of Hospitals or Hearts Of Palm had best seek elsewhere.

It’s to John Twells in his Xela guise that we must look should we wish to seek out something ectoplasmic, something from the dark side. The Divine (DEKORDER 042) is the second part of a “trilogy” presumably begun with The Illuminated, his previous release for this label, and suggests all manner of occult movements and spiritual disruptions across two sides of moody, atmospheric and highly layered spacey noise. As I’m slowly learning with Xela, his use of recorded human voices is one of his secret weapons, as he drops in half-glimpsed shadows and whispers across the music to suggest cryptic messages from beyond the grave. The classical statuary on the cover further advances his “ancient” yearnings as he rewrites the history of early civilisations to reveal alternative religions and unknown mystic cults. The A side is muffled and disturbing, the B side has a little more depth in its super-dark ambient questings.

Cape Fear is a solo project of Laurent Perrier, the French multi-tasking creator who puts a great deal of care and attention into the high-quality releases on his own Sound On Probation label. Winds of the dead air (LP SOP 015) blows in like a Harmattan with five tracks of suave and intelligent electronica rich with beats, loops and other insistent repetitions that work overtime to milk the minimal melodies from the udders of the sophisticated jazz-beat cow. Perrier composed, recorded, played, produced and mixed everything, and then supervised the mastering process himself, the better to deliver the cleanest and crispest sound quality that a recording engineer could ever dream of; in another time and place, Perrier would have risen to become the right-hand man of Rudy Van Gelder in short order. With its vaguely supernatural titles such as ‘Ghosts’ and ‘Haunted’, Perrier is probably aiming at something quite different from the threatening murk proposed by Xela, yet still this jazz-noir record carries a sharp and sinister edge like a Parisian Apache carrying a concealed switchblade. Mince de chic!

Also from France, two miraculous records which combine the glory days of 1970s French underground jazz-rock with contemporary sounds, bruits, and actions. Empan‘s Entraxes inégaux (BLOC THYRISTORS 0040) just sounds completely bonkers as soon as the bewildered stylus touches the tumescent red vinyl, delivering an impassioned blast of avant-jazz stompery in the RIO vein which follows no rhyme or reason, and is driven into even further corners of joyful insanity by the assured, mannered scat-piping vocals of Judith Kan. Veteran prog drummer Jean-Noël Cognard supplies the unrestricted percussive elements, and I love the melancholic cello work of Béatrice Godeau on the slower chamber-prog tracks. But the real coup is Dan Warburton on violin and keyboards, and (wait for it) Jac Berrocal on trumpet! Just ask any French connoisseur about this glorious period of their musical culture, and they will happily take you home and unveil their secret shrine that puts an effigy of the amazing Berrocal on its central pedestal, closely flanked on either side by Pierre Bastien and Pascal Comelade holding wreaths of respect and awe. Many listeners found a way to Berrocal through Nurse With Wound, others through the Alga Marghen reissues, but we all know there simply isn’t enough of his genius to be had on vinyl. The situation just improved substantially with this beautiful release. Look at the incredible silkscreen sleeve too, by the award-winning Mounir Jatoum who did the unforgettable cover for LE PETIT MIGNON LPM01 (see here for our immediate impressions of that blaster).

The same label has put out the equally sumptuous package for another LP by TANKJ, who created one of my fave vinyl vloggeroos from last year. On Craquer Les Liants (BLOC THYRISTORS 0050), Cognard strikes again, this time with the help of Jérôme Noetinger using his Magneto Revox as if intent on cracking apart every paving slab the length of Boulevard Saint-Michel. Fast, energised, free-form jazz rock enriched with brass, double-bass propulsion, junk, and electronic barbs, all make this another essential listen. Another silkscreened package of warpoid beauty from the same art collective as above, this time calling themselves Jörg Morning. Many thanks to Jean-Noël for sending these certified beauts which are co-releases with Bimbo Tower, the centre of all things that guarantee weird and colourful fun in marginal Parisian culture, and from whose shop you can nab ’em (but be quick, only 300 copies exist); also inserted in the covers what do I find but a poster for an astonishing musical event headlined by Lard Free, and featuring Marteau Rouge (with Jean-Marc Foussat), Salmigondis, and Evan Parker; with Steve Stapleton doing a DJ act. This took place last December in Brussels. I missed it.

The Rebel is from England and while the cover art of his bizarre solo LP may be quite some way from the fine-art stylings of those French screenprints, I think you’ll own it’s highly striking in its peculiar way. The Incredible Hulk (JUNIOR ASPIRIN RECORDS ASP 019) is an LP of extremely odd songs which to begin with reminded me of John The Postman (full marks if you ever heard the home-made records by this amateurish singer from the post-punk era), but that impression may result simply from the highly idiosyncratic Postman Pat story which graces the first side. The rest of this curio by Ben Wallers (from Country Teasers) is unpeggable in the best sense, veering wildly from lo-fi ramshackle madness to well-constructed dark electro pop songs created with effortless crackpot skill. Like Xela, hidden messages can be teased out from the grooves of this one by those patient enough to untangle the skeins of layered muttering voices. For those with a taste for the furthest reaches of mental decay, a record like this is pure gold; you won’t believe what you’re hearing as you let its warped grooves unspin and slowly cloud over your cranium. 500 copies.

Lastly we have the dark horrors of Near Death Experience (ERRATUM MUSICAL EM006), an LP in a charred gatefold cover adorned with mirror-writing on the back cover and close-up photos of the extreme genius that is Bryan Lewis Saunders. While I’m still finding previous listen Daku quite an indigestible proposition, there’s a chance my ears can worm a way into this vocal fright-fest as I follow its oneiric, surrealist trails; although known for his viscerality, Saunders also likes to record himself speaking as he dreams and perhaps unlock secret chambers of the mind thereby, in fine Andre Breton style. Nevertheless the shouted and intense vocals on here, not to mention the overall accusatory and hysterical tone in which these toxic utterances are delivered, will make this LP a tough experience to sit through even for hardened fans of apocalyptic music. “I myself have only listened to it once on a great system in the dark”, reveals Saunders in an accompanying letter, in which he describes the release as a collection of “extreme autobiographical stories”. Where Daku featured Z’EV’s music, this one offers numerous co-creators, among them John Duncan and Marcelo Aguirre and five more, all of them contributing suitably sick and demented backdrops of unpleasant sound. Capable of generating extreme physical reactions in the listener, this record represents the sort of material that a wimp like me normally steers clear of, but I do respect the all-or-nothing qualities of Saunders’ performances; everything to him is truly a matter of life or death, with no hyperbole! A splendid presentation from this French concrete poetry label; purchasers of this item get a link to download the whole LP plus nine extra tracks as MP3s, and a PDF of texts. Like the man says, pure “PCP Poetry!”