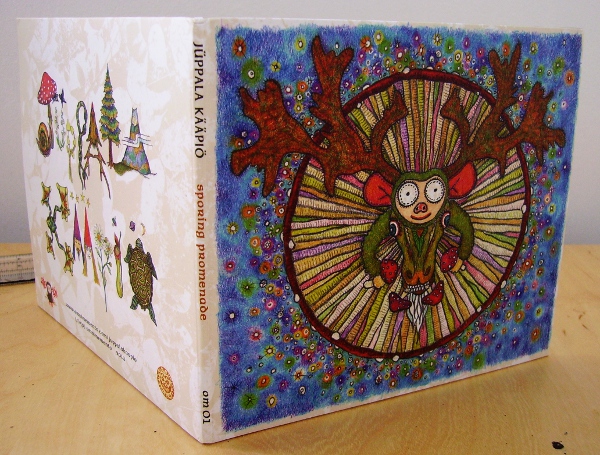 Jüppala Kääpiö take us on a Sporing Promenade (OMNIMEMENTO OM01), a very sylvian-pastoral escapade where the watercolour-styled music is a series of meandering acoustic twitters, drones and peeps, surrounded at all times by forest-like atmospheres and evocative sound effects. The singing voices which wail and hum in airy tones as though wafted into our lugs on a gentle breeze are particularly affecting. Inside the booklet there are charming woollen dolls of elves, gnomes, and other forest sprites, photographed amongst nature’s glory (leaves, mushrooms, dew) in delicate, dream-like colours. In fact the whole album exudes a distant, dreamy air that you could use while reading Alice in Wonderland. The band may have a Finnish name and exhibit concerns we would associate with the wood-dwelling Finnish Free Folk brigade, but in fact they are German and Japanese – the husband and wife team of Carole Zweifel and Hitoshi Kojo, who also records as Spiracle (producing memorably minimal drone pieces). A very convincing “take” on certain territories staked out by say, Jeph Jerman and Loren Chasse.

German Dadaist Raoul Hausmann used to leave visiting cards printed with the legend “President Of The Sun” amongst other grandiose titles when he strolled around Berlin in 1919, presumably doing his bit to baffle the normals. Column One now pay tribute to this important artist, and to a very specific crisis in the Berlin Dada movement around 1920, with this CD Präsident Der Sonne (MOLOKO + PLUS71). It purports to have been created by “relatives and descendants of those DADA protagonists”, but given the penchant of Old Europa Cafe (where I found that description) to invent fictitious histories and incredible yarns, we can probably take this statement with a pinch of salt. That said, it’s a brilliantly confusing listen, alternating very disturbing slow dark-electronic abstractions with acoustic nonsenses – aimless percussion and mad laughter – which do indeed resemble what we’d always dreamed a performance at the Cabaret Voltaire would sound like. Plus there’s one track which makes great use of an old crackly sound-poetry record; perhaps it might be samples from one of the surviving recordings of Kurt Schwitters’ Ur-Sonata. To complete the package, the covers and inserted booklet are full of stunning collages and typographic experiments by Tom Platt, Jürgen Eckloff, Stea Andreasson, and Robert Schalinski, some of which are spot-on pastiches of the work of John Heartfield and other original Dadaists. These meagre clues aside, this is a perplexing package which doesn’t give much away in its darkly anonymous electronica segments.

Absurdity and ugliness abound from Fat Worm Of Error, whose Ambivalence and The Beaker (RSPT039) has been released by Resipiscent Records (who else). Originally issued in 2007 as a CDR on their own Yeay! Cassettes label, this is a bewildering bucket of incoherent insanity from these Northampton (Massachusetts) fellows, harking back in some ways to the sputtering rattle-shock methods of Trumans Water. The Fat Worms eschew loud volume however, and their effectiveness comes from deploying very unusual and unnatural electronic and acoustic sounds, unexpected stops and starts, broken phrases, free-form poetry lyrics, strange baby-like vocal dribblings, and declamatory voices whose tone reveals that Fat Worm of Error’s members are, like the best lunatics, utterly convinced of the sanity of their preposterous mission in the world. I’m all for it, but the complete lack of coherent planning or structure on this album also makes it quite a wearying listen sometimes.