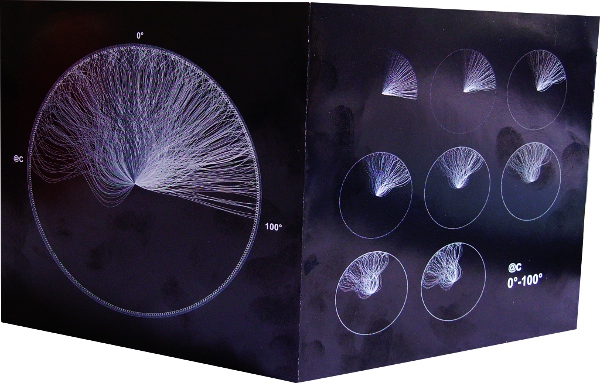 @c are the duo of Miguel Carvalhais and Pedro Tudela from Portugal. On 0° to 100° (MONOCHROME VISION MV31), we hear a selection of process-based digital compositions making extensive use of world-wide location recordings (including oceans, rivers and volcanoes), played back in methodical ways and making severe and judicious use of the mixing desk. The work appears to have been related to a gallery project, and the listener can well imagine these intensive episodes taking place as part of sonic and audio-visual installations. This Composition #77 has been layed out for us in 8 numbered parts, including the number zero. A fine piece of contemporary electro-acoustic minimalism from our favourite Russian label.

We recently noted some of the more extreme metal-noise excesses from Cold Spring, but here is something in quieter mode: Daas (CSR128CD) by Machinefabriek. Rutger Zuydervelt has been producing his subtle droney compositions for many a year and usually conveys for me the impression of floating down a canal at a very slow speed. It would be even more enjoyable if I was in a barge at the time. Here, Rutger is joined by simpatico players Greg Haines and Anne Bakker with their violin and cello, and Richard Skelton who provided the “basic materials” for the title track. Three of the pieces have been compiled from 3-inch CDRs, while ‘Onkruid’ originally appeared on a split LP. Faded, attenuated music of great melancholy settles into your ribcage as you spiral to the centre of this slow-motion whirlpool. Cold Spring also released Vloed by the same artiste in November 2010.

Talugung is Ryan Waldron, the Canadian musician who works with found or hand-made musical instruments when releasing works under this project name. Anura (AMORFON 012) is a quite startling collection of bowing, scraping and percussion music, on which Ryan does everything in his power to emulate the sounds of frogs. The results are quite some way from when Merzbow famously paid tribute to the Frog on his blasting album of the same name, and Waldron’s all-acoustic efforts here are rich in minimalistic and very natural detail. It’s almost as though Henry Flynt had been born in Polynesia and took up snorkling. I haven’t yet looked into the extent of Waldron’s researches into the realms of the Batrachian, but I am prepared to believe he donned a large green frog suit and sat in a swamp for 16 days to achieve his aims. The cover photo shows a detail of just what this man can achieve with short strips of metal, wood, hooks and coiled springs. I recommend hearing this oddity, described by its label as “peculiarly mystic music”.

Harbour (HERBAL INTERNATIONAL 1002) is a nice one I’ve had in the box since July 2010. Lasse-Marc Riek is a German field-recordist and for this collection he hied himself down to the waterfront to pick up certain sonic impressions of steel hulks floating in the brine. He did it in Germany and Finland, concentrating largely on the creaking and clanking of metal, wooden planks and rope, rather than the bustling life of a harbour packed with burly matelots. Unlike our Portuguese pals above, Riek is proud of the fact that his field recordings are completely “unprocessed”, and he serves them up as fresh as an offshore breeze.

Craig Vear is an English field-recordist. He made Aud Ralph Roas’le (GRUENREKORDER Gr 075) while an artist in residence at the University of Hull, and his purpose was partially to test new recording equipment for the Centre for Environmental and Marine Sciences. Woods, rivers and the seashore are those triumphs of nature’s marvel that command most attention from Vear’s mics, but the impressive weather systems also make unforgettable appearances on the record. Come to that the whole CD feels like it’s drenched in bracing English rain and wind. Considering he’s realised a lot of projects in Antarctica, perhaps Vear finds his inner compass is irresistibly drawn towards inhospitable climes. Certainly the tracks here which feature ice (such as ‘River Esk Frozen’) create some of the more memorable listening moments.

Rust Fungus (Z6 RECORDS Z6000999) is not en environmental record, but Anne La Berge and Lukas Simonis still manage to convey something of the grit and grime of modern urban surroundings with their bitty and fragmented performances. Simonis uses the guitar and effects, La Berge has her flutes and electronics, and they both add voices. I like the way duo work very hard to bypass normal musical activity, and force unnatural groaning, cloinking and stuttering sounds from their respective hunks of metal and wood. In fine, they come close to emulating the wild non-musical improvisations that Tim Olive has made all his own. Many of these short tracks are underpinned by a queasy rumbling that suggests nausea and mild anxiety. As to the “urban” theme, it is largely suggested by the cover photos (by Peter Luining) which single out certain bizarre details of men at work in the streets, and evidence of their unfinished tasks. The track titles are somewhat more whimsical, such as ‘Kiosk of my Dreams’ and ‘Wasabi Tool Enigma’.