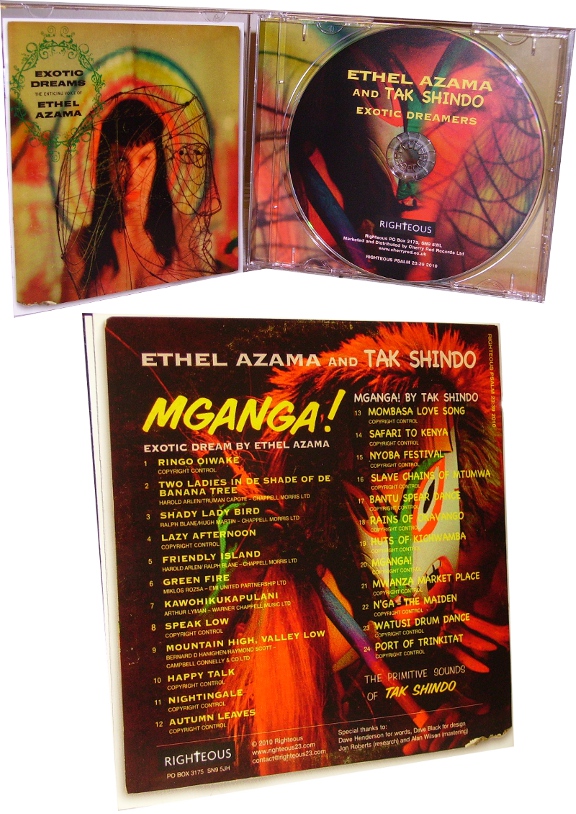 Just spun this delicious dose of 1950s exotica this afternoon, while dozing on the armchair and half-watching a Star Trek movie. Like many of these Righteous releases, it packs two half-hour LPs onto a single CD, but the skilled curators at work on this series do their themed pairings with considerably more care than some crutty budget label trying to save costs by cramming unrelated tracks together. Exotic Dreamers (RIGHTEOUS PSALM 23:39) starts off with an album of songs by Ethel Azama, originally released as Exotic Dream by Liberty in 1958. The story of it is that this Hawaiian singer was talent-spotted by exotica royalty Martin Denny, who set up a session for her with Paul Conrad, one of his arrangers. Although Azama, who is a very competent singer but not exactly in the same league as Julie London, Peggy Lee et al, would eventually settle into a career releasing albums of jazz / cabaret songs and standards, this debut LP is uncharacteristic, and stands out as a fine mix where jazz singing meets exotica orchestration – with sexy results! With numerous songs about colourful songbirds, typical “jungle” landscapes (‘Friendly Island’, ‘Green Fire’ and ‘Mountain High Valley Low’), one Arthur Lyman cover and of course an inevitable version of a chestnut from South Pacific, this is a heart-warming delight as irresistible as a coconut cream cocktail with spiced rum. ‘Shady Lady Bird’, a shoping-list ditty where the chanteuse likens her sexual wiles and charms to an assortment of avian specimens, is a particularly affecting belt of retro-sassiness.

Other half of this release is Mganga! by Tak Shindo, a composer who I never heard before but this little gem gives some serious competition to Tamboo! and Ritual of the Savage. In the 1960s Shindo became a major TV composer, but this 1950s album is like the above another suitably “jungle” themed piece of exotica folderol, with its flawless arrangements, bamboo flutes, chanting natives, pseudo-tribal drumming and evocative titles that would give heart failure to any serious student of anthropology. Its scattered references to African culture (Mombasa, Kenya and Mwanza are all namechecked) are ever so slightly undercut by the penultimate track, ‘Watusi Drum Dance’, which yokes ethnic musical impressions to this short-lived American dance craze of the early 1960s. There’s also ‘Port Of Trinkitat’, a tune which somehow avoided release on the classic Les Baxter travelogue LP Ports Of Pleasure. “Listen to the shifting, whispering sounds of these imagined neverlands” is the advice of Dave Henderson’s sleeve note. You see, Pablo Picasso wasn’t the only artist to have been influenced by African masks…and there’s an essay waiting to be written right there!