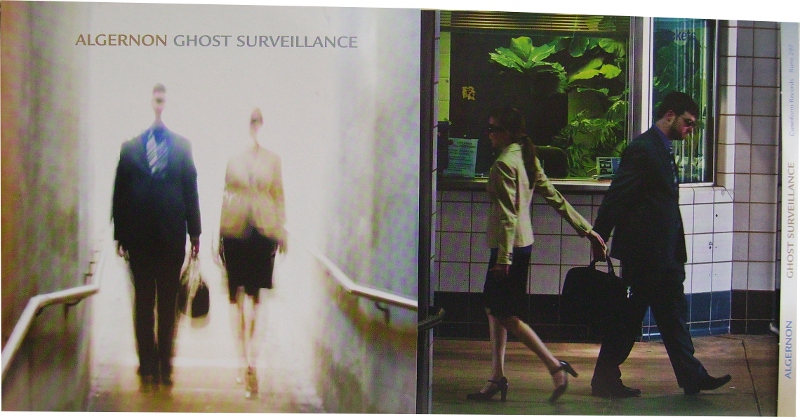 Algernon are a five-piece contemporary prog-jazz-rock fusion outfit based in Chicago, and Ghost Surveillance (CUNEIFORM RECORDS RUNE 297) is their third album. With oodles of guitars, keyboards, vibes and proficient drumming on offer, they turn in some very decent instrumental pieces which, although a little too slick and polished for me, do have the occasional flash where they remind me of the 1974 Zappa band that could play complex and demanding pieces like ‘Inca Roads’ standing on their heads. The cover art’s set of intriguing photos vaguely suggests a narrative, not unlike The X-Files or The Event, of besuited officials stalking the corridors of power and passing coded messages; come to think of it, it’s the sort of sleeve Hipgnosis used to turn out in the 1970s for prog bands on major labels.

From a very maximal album we turn to a very unobtrusive item, tahata (NITKIE PATCH ONE) by jeph jerman and doug theriault, both paid-up members of the lower-case brigade. Guitar, percussion, electronics and objects are apparently being played somewhere on these live recordings made in Portland 19 February 2010, at a venue called the Dream Attic. Slip it into your player and adjust volume as needed to enjoy these barely-there shrouds of ultra-minimal live performances, where despite the impressions of emptiness a fierce tension still lingers in the charged air. The label Nitkie appears to be an offshoot of Monochrome Vision in Russia, and Dmitry Vasilyev did the cover artworks; Jerman’s photos are tellingly devoid of human life, and invite us to contemplate peeling paint, growing mould, and warped wooden furniture in some forgotten rural outpost.

Ah, just found another item from MV, here doing what in my view they do best, rounding up obscure tracks by obscure industrial-electronic projects. The Oval Language have been around since 1987 and may still be a going concern. On Tapes Singles and Remixes (MONOCHROME VISION MV34) we hear some of the work of Frank Berendt and Klaus-Peter John reclaimed from cassette tapes, plus a further 8 cuts remixed by our good friend Guido Huebner. The duo have an impressive CV of collaborations and art-mode installation work, but it seems their “audio output…is not so well known”. So far what I hear is very fine abstract and scratchy grumblings delivered in the frowny and brooding mode that creates sensations of intensity and mystery; not fierce roaring noise, but not music either. Huebner is just the right collaborator to heighten these curious sensations, with his enigmatic reworkings.

I’m still waiting for the excellent Jazzfinger, Newcastle’s finest duo of flumpy electronic home-made improv noise, to be received with the same sort of accolades as are often unthinkingly accorded to many American projects in the same vein. The Metal Eggs (INFINITE EXHANGE IECDR016) CDR may not be the benchmark album that is going to change everything, but it’s very representative of their strengths and, unlike some releases I’ve heard from them, doesn’t feel the need to sweeten the deal by editing the lengthy performances into bite-size pieces. Accordingly we’ve got two long 18-minute tracks right at the start of this disc, both exemplary slabs of their turgid, groany non-music, the first of which is like observing the decay of organic matter through stop-motion film, to the accompaniment of a badly-played soap opera organ. The second is richer and illuminated by flashes of cosmic percussion and chimes that moves us slightly closer towards Ben Reynolds territory. Nice item in an ejector box, if you can still get it – seems it came out in July 2009.

Two American “giants” of the 1980s industrial and tape scenes, Al Margolis and Dan Burke, slug it out on this live release (ABSURD #76) from Absurd Records in Greece. Actually they don’t so much slug it out as try and stare each other down with murderous and slow-burning electronic drones, each one more menacing and combative than the last. They did it at a place called Le Bonheur (given the grim nature of the solemn music, a less appropriate venue name cannot be conceived) on 5th April 2008, and the venture is illustrated on the cover images of cars driving in atrocious weather conditions, their very chassis obliterated by the poor light and atmospheric hell that surrounds them.

Gail Priest is a Sydney-based polymath involved in writing about art and curating exhibitions, and has been involved in various multi-media and installation projects and radiophonic events. Presentiments from the Spider Garden (ENDGAME RECORDS END024) is her first solo recording, and it’s an assured sweep of pristine, detailed and delicate electronic music, in support of a concept about the activities of our Arachnoid compadres, with occasional references to web-spinning, but mostly full of dark and improbable fantasies about the secret lives of these eight-legged creepoids. The package is also thoughtfully executed, masquerading as a battered exercise book that may have fallen from the hands of a researcher who’s been influenced as much by Emily Strange as Ludwig Carl Christian Koch. Some audio assist by Shane Fahey (who appeared on the famous M Squared label in the 1980s). Very good, evocative music with strong ideas and much clarity of purpose.