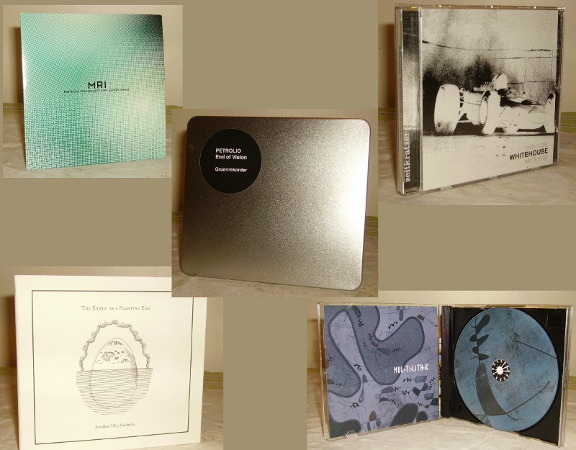 MRI (EVEREST RECORDS ER CD 043) is a nifty piece of process-electronica produced by Patricia Bosshard and Simon Grab. All the noises we hear, which include a range of menacing pulsations and mechanical thumpings, were generated by an MRI scanner. Magnet Resonance Imaging is of course commonplace in hospitals now when they want to make images of your body. This sort of approach to electronica – using non-musical scientific devices as potential sound-sources – was one development that seemed very promising in the mid-1990s (cf. Disinformation, John Duncan and Scanner to name but three proponents), and it’s good to learn the seam of investigation continues. Purchaser of this record also gets a “library” of short sound samples after the album, which brings the disk up to a whopping 90 index points. With a name like “Simon Grab”, it’s almost as though one of these creators was born to be a sampler.

The Earth As A Floating Egg (SOOPA) is the metaphysical proposition of Jonathan Uliel Saldanha, who plays out his theoretical ideas in the shape of this astonishing ten-track release which began life as the soundtrack to a work by the choreographer Isabel Barros, and has now been reworked into the present suite of diablery. Saldanha plays a deal of the enigmatic music himself on percussion, keyboards, computer programming and processing, but is joined by numerous musicians who play more conventional chamber-jazz instruments. “Non-chronological narrative, elements of ancient Finnish and Babylonian mythologies, nymphs, ever-present ominous birds, alchemic methods in the tradition of King Tubby and Giacinto Scelsi,” are just some of the objects packed into the mental shopping bag of this significant member of the Portuguese avant-garde, who sometimes records as HHY and is a multi-instrumentalist which a strong interest in dub music. The front cover looks like the frontispiece to a 16th-century treatise of Newe Scientiffic Discoveries and has been embossed with an ovular shape in blind, while the back cover of elaborate tune titles reads like the missing chapters to Gulliver’s Travels. Potentially very exciting and tremendous work of spectral complexity here.

Reinhold Friedl’s Zeitkratzer raise the bar on their own project with each new release, and their latest CD Whitehouse electronics (ZEITKRATZER RECORDS ZKR 0007) elects to render the extreme noise of William Bennett as all-acoustic music, carefully scored for the ensemble of woodwinds, brass, strings and percussion. William Bennett, widely regarded as a major player in the extreme industrial noise stakes, himself participated in the rehearsals and mixing, and provided some materials to Friedl that would make scoring a possibility. Bennett, it seems, has adopted strategies of high secrecy and highly unorthodox working methods that make it more or less impossible to repeat a single Whitehouse recording or performance, and he packs his published titles with information and content so obscure that no-one can possibly discover the references he makes. This is an approach to hermeticism that might be aligned with Nurse With Wound or even Ramleh, those past masters of reclusiveness. I’m not the man to ask about Whitehouse’s music (never heard a single note of it, me dears), but this 27-minute disk is a coruscating meisterwerk. The harsh and stark grinding effects on ‘Scapegoat’ are particularly impressive, and induce an instant anxiety attack in under five minutes. Now I need to swallow eight Nurofen and spend the rest of the day in bed. Even the racing car on the front cover looks to me like it’s hell-bent on a collision crash!

From Columbus Ohio, Paul Carney sent us a copy of his MUL-Ti-LiTH-iC release (I SEE SOUND), a single electronic composition divided into six parts. Another player who could be said to be reclusive and hermetic, but in a far more benign way than Whitehouse, Paul Carney has recently posed the question “How do we retune the World?” and illustrates his ideas using interesting images which seem to suggest consonances between architecture, circuit boards, the wings of a moth, and aerial views of the city. However, all of that refers to another composition, and I find no explanations or contextual information that helps us to parse the shape-shifting surfaces of MUL-Ti-LiTH-iC. Not a minimal work; there’s plenty going on here to occupy the ears and brain receptors of 100 men, and the layers of information are indeed as geologically dense as the crust of the earth, but Carney’s ideas follow labyrinthine paths worthy of Jorge Luis Borges.

Petrolio also seem intent on telling fractured stories on their End Of Vision (GRUENREKORDER Gr 076), which is structured in three parts with chapter headings and titles; these are used to describe the dissonant avant-garde scrapes of the percussionist Luca Roba, the bass player Michele Spanghero, and the pianist Ugo Boscain. Their minimal non-jazz playing is supplemented with electronics, sampling, laptop work, the spasmodic grunts of a contrabass clarinet and some field recordings too. With titles like ‘An Uncertain Anchor’ and ‘Spectral Activities’, you can be sure of entering a grey and ghostly house of mirrors where nothing is quite as it seems, and even the servants mean to do you harm as you sleep. The trio used omni-directional mics to record their work in Trieste, and dedicate their stern music to Pier Paolo Pasolini.