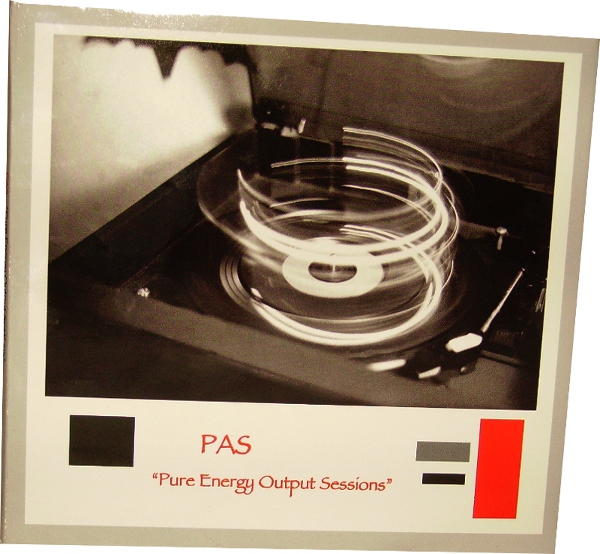 PAS is the acronym for Post-Abortion Stress, not an especially savoury name for your band, but Robert L. Pepper and his constituents Amber Brien, Michael Durek and Jon “Vomit” Worthley make a very decent fist of producing collaborative electronic mélanges on Pure Energy Output Sessions (PAS RECORDS 6). They’re capable of a certain strain of low-down sulky monotone eruptive industrial-pulsage that puts the listener right inside a cramped and dank cellar with no lights or oxygen, but PAS can also do the outer-space spookoid thing very distinctively, with their theremin-like meanderings, treated voices, and keening bagpipe effects. Keyboards and instruments are approached as though they are potentially harmful objects, rather than useful tools. And once you see the colour photos of the foursome posing on the floor with fans, a telescope, and other props, you know you’re in the safe hands of some talented merry freaksters who bode no ill.

Now here’s Keränen with Bats In The Attic (PICA DISK PICA025). It’s 36 minutes of heavy-duty buzzsaw attack created at the EMS Studios and Studio Decant, and it’s utterly brilliant. Vintage analogue synths from EMS were used in the concoction of this lively fizzing racket, and I think I can detect some vicious layers of radio samples in here too, but it’s all one solid package of gritty and caustic loathing that causes brave skeletal frameworks to disconnect from central nervous systems. Finland noise god Tommi Keränen is one half of Testicle Hazard, is also a member of Gentle Evil and Les Manures, and this release is noteworthy because apparently he hasn’t made that many solo records in his career. Maybe it’s because the authorities realise the dangers of allowing him do so. Grab this scalding monster while you can, before it’s outlawed.

Subdued process-digital work from Matt Shoemaker on Soundtrack for Dislocation (ELEVATOR BATH eeaoa034), recorded in Seattle in 2008 and packaged by the label with some attractive full-colour photographs. In his images Shoemaker makes nature look ever so slightly alien, as though an innocent forest were the set for a science-fiction movie involving the invasion of a pulsating glob of pink jelly. Some of his music here generates the same sensations of anticipation, with their ultra-long sustained and extended abstract tones resembling long camera takes. The album includes one long track, ‘Circulation within the elemental drift’, which explores many of Shoemaker’s concerns with slow, patient dynamics and gradual shifts.

Seems perhaps a little surprising to find a guitar album on Editions Mego, but the label has been expanding horizons and ideas for some time now. Mark McGuire plays in Emeralds (who are also represented on this label), a band whose cosmic electronic musical identity is well to the fore, but on Living With Yourself (EDITIONS MEGO 107) we hear solo electric and acoustic guitar instrumentals recorded by McGuire in 2009. The intention is to create a sort of mental scrapbook of recollections of relationships with family and friends, and many of the tunes are fit frameworks for nostalgic musings of this ilk. Some cuts are recorded clean, while others – ‘Clouds Roll In’ and ‘Brain Storm’ – make use of digital echo and overdub effects, and the former reminds me of Neu!. I don’t think there’s a minor chord on the whole album, and McGuire clearly favours extemporising his notes and clusters within single root chords; this doesn’t transform him into Daniel Fischelscher, however, and to these ears he’s occasionally in danger of sailing too close to New Age elevator music.

Mike Vernusky is the other half (with Cory Allen) of Quiet Design records in Texas, and his Music for Film and Electro-Theatre (QUIET DESIGN ALAS012) is a set of nine pieces realised with the help of numerous collaborators, including percussionists, singers, narrators and voice actors, besides Cory Allen on the moog and Vernusky himself working guitars and electronics. Plus Michael Kranes, intriguingly credited as the “Arlen Specter”, which is fitting for this funereal and spectral music. A series of low-key fragmented narratives emerges from these strange and abstracted electro-acoustic suites; ‘Dallas’ is one example which is more like a radio play than a piece of music, and with its fragments of drama apparently re-enacted from a Senate Sub-Committee investigating the JFK assassination, it’s a compelling work of layered paranoia and tension. Most of the disc is word-free sound-art though, and replete with unusual textures and effects that drip out of the speakers like honey from the inside of a rotting animal. I seem to recall I have found Cory Allen’s work concentrates more on process, and is somewhat tidier and more well-ordered than what we hear on this bucketful of writhing entrails plucked from the belly of a Webcor tape machine, but that isn’t to deny that Vernusky is clearly very deliberative and considered in his construction of these dense, opaque pieces. Guaranteed a good head-scratcher every five minutes with this disk of mystery, a terrific work which I recommend.