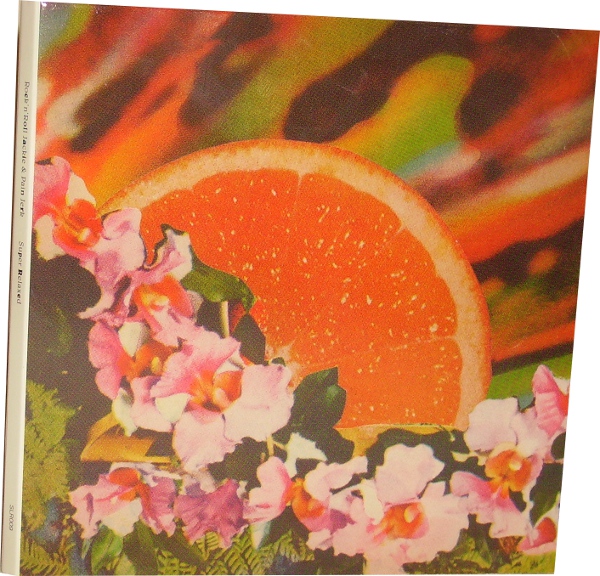 Super Relaxed (SECOND LAYER RECORDS SLR009) is a recent release on Second Layer Records, a collaboration between Japanese noise fiend Pain Jerk and Jackie Oblivia of Smegma, the latter calling herself Rock ‘n’ Roll Jackie for this outing. Appropriately, this was one CD pressed into my clammy paw by label owner Pete Johnstone at the October 2010 event The Lowest Form of Music, of which he was co-organiser, and which happened to be the first-ever gathering in the UK of key members of The Los Angeles Free Music Society and related musical projects. Among other things at that weekend, I learned a lot more about the history of connections between Japanese free noise and the LAFMS, which is a rich subject fit for at least a couple of investigative essays I am utterly unqualified to write. Two long tracks on this smashing little CD, which is an indescribable collision course of insane samples and wild electronic music to generate an express-train effect of multiple loopy ideas coming at you at an unstoppable rate. Digipack package is beautifully decorated with collage artworks by said Jackie Oblivia, and I would say that if you wanna cook up your lunatic brain into a batch of soft noodles then it’s an absolutely essential purchase.

John Wiese also showed up at the LAFMS October happening and here he is now leading the Sissy Spacek project with Sepsis (SECOND LAYER RECORDS SLR012), which for this session is augmented with LAFMS member Rick Potts, plus other LA luminaries Damion Romero, Joey Karam, Peter Kolovos, Shannon Walter and Mitchell Brown. On this 2008 date, everyone pitches in with an assortment of synths, guitars, electronics and things, producing a strangely subdued and dark album that is deliriously listenable. Some Sissy Spacek records are cut to ribbons by an editing tool, but this one seems to document entire streams of inspired, spooked-out performances that are as much psychological therapy as they are music. Wonderful record of slow and grey abstract improvised free non-musical noise.

The Slate Pipe Banjo Draggers may not exactly be London’s answer to the LAFMS, but with a project name like that I couldn’t resist weaving this screwball release into tonight’s post. Prime Bolus Music 2010 is a very enjoyable 16-minute CDR of gently freakoid pulsating electronic whirl and screech, which feels like a combination of relentless sequencer-programming with drum machines, wayward tape loops and voice samples. The Draggers turn out to be the work of one fellow, Andrew Rowe, who is quite the multi-media creator with his paintings, videos, and live performances. This CDR has been boiled down and mixed from a live set which creates the effect of a stint on the dancefloor (not that I would know anything about that) turning into a crapulous nightmare. Good stuff, useful to rewire the circuits of your mind.

While we’re still more or less on the subject of Los Angeles, we have LA Lungs with their Cryptic Snuggling (DEBACLE RECORDS DBL034) CD, Actually this project turns out to have nothing to do with LA and is based in Tacoma, Washington State. There may be two creators involved (Leeward and Afterthought) playing guitars, loops, keyboards, electronics, samples and more, and creating vaguely disquieting ambient effects, occasionally punctuated with semi-musical statements drawled in a languid way. Nice immersive and melodic stuff, but doesn’t quite live up to the sinister promise of that cover image.

Safe is the duo of Paul Hegarty and Brian O’Shaughnessy, and Bare Life (DOTDOTDOT MUSIC 009) is their fourth full-length CD; Hegarty runs the label and Safe have collaborated with Dennis Cooper on the powerful Ugly Man release. A fair amount of rumbly almost-identikit Merzbow-like noise available on this grinding warhorse, but the duo also have a line in creating very distinctive gobbets of shrill electronic mayhem that you can taste like a sheet of tinfoil crammed in your mouth. This release consists of two suites, ‘Sky Burial’ in five parts, and the 33-minute piece ‘The Red Night’. This latter one is quite a substantial chunk of grisly and corrosive dynamics, and relentlessly creates the impression of a gigantic mansion going up in a huge conflagration where you feel the blistering flames and choke on the thick smoke, with no chance of reprieve or rescue. Images of naked bodies cavort strangely on the cover, while inside vultures pick clean the carcass of modern music with their extended beaks. In Black Metal fashion, the duo seem to have adopted a Chimera or Hippogriff as their emblem.