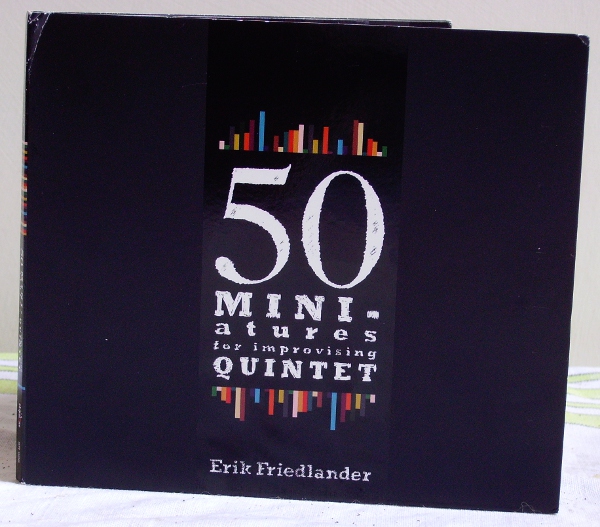 Cellist Erik Friedlander has turned in some fine examples of contemporary small-group jazz in recent years. 50 Miniatures for Improvising Quintet (SKIPSTONE RECORDS SR 006) is another sort of proposition, 50 very short pieces of chamber-jazz, compressed into groups which last around 4-5 minutes each, and performed with the help of four other talented musicians on piano, bass, percussion and violin. Each item is a little gem of compression and feels more composed and polished than anything we might normally associate with “raw” improvisation. The overall structure of the work follows a 50-step mental exercise called “50 Gates of Understanding”, which is a process of “self-evaluation and character development” as practised by Moses and the Israelites during their exile in the wilderness. John Zorn supported the project, as did the Contemporary Jewish Museum, and one half-expects it to have been released on Tzadik’s Radical Jewish Culture series. Precise, melancholic, considered.

I’m getting a bit behind in keeping up with the new releases from The Lickets, a somewhat mysterious combo from San Francisco who are represented by the International Corporation. Eidolons (NO NUMBER) is just one item we have received in recent months, a double CDR set of charming instrumentals which were created as a response to “a short, silent series of everyday images” – a strategy for which one reference point might be Brian Eno’s Before and After Science LP. The handmade release comes with reproductions of watercolour paintings bound in as a short booklet, and the creators Mitch Greer and Rachel Smith admit they also draw some inspiration from Walt Whitman, the bearded nature-loving poet that has inspired many an American to follow the path of Thoreau. Decidedly pastoral and friendly in tone, with perhaps even a little Oriental influence in the sounds and musical scales, this is a very pleasant “imagistic” item.

The Slaves are the duo of Barbara Kinzle and Birch Copper from Portland Orgeon, and Ocean on Ocean (DEBACLE RECORDS DBL045) was recorded direct to 4-track cassette with multiple overdubs of instruments blending into a spongy quagmire. Slow dark ambient rise-and-fall music with additional angelico-Goth touches provided by the quasi-celestial voices, which form a dreamy choir whose messages remain tantalisingly out of reach. The syrupy textures and very “full” sound of this album generate the requisite mesmerising and immersive sensations.

Quite excited by this St.Ride item Cercando Niente (NIENTE RECORDS VOLUME 6), a bracing dose of distinctive punky electronica which was made in Genoa by the duo of Edo Grandi and Maurizio Guesmerini using analogue and digital synths, voices, guitars and percussion; the pair have a gritty and spirited attitude that lets you know at once they’re not prepared to let their devices take control of the situation. At their best, these electro-disfunctional instrumentals hop about the beat like 18 maddened cockroaches, rarely settling into a steady groove or providing anything that resembles a danceable rhythm. Into these broken frameworks, nasty growly guitar and ill-fitting synth riffs are crudely inserted as if by means of crowbar, rope, and axle grease. Meanwhile the vocalist barks out his unfriendly messages with an odd mix of urgency and indifference, like a disgruntled cyborg who is starting to rebel against the program that requires him to act like a domestic servant. Apparently, what he’s doing is reading out a list of music genres which are considered to be dead and useless, as though standing at the grave of modern music and reciting a litany. I also enjoyed the fvrtvr release on this little Italian art-label and recommend you investigate what else they have to offer – when nienterecords.com is fully operational, that is!

Sonology (SOUND ON PROBATION CD SOP 014) is a split CD showcasing the cold and dark subdued electronic music of Kinetix and Pylône, and listening to it is like huffing a gigantic dose of ether. When I climb off the stone slab some 14 hours later, I can tell you that Kinetix is the latest project name for Gianluca Becuzzi, a multi-media creator who’s been performing and recording in Europe for about 20 years, exhibiting an interest in minimal computer art, installations and sound design as he passes from one city to the next like a stealth airliner. His two tracks here date from 2000 to 2004 and have been programmed to last precisely 20 minutes each; while the first is an assured but fairly routine passage of glacial synth-chiller drone, I found the second one more engaging with its cut-ups of disembodied voices and murmurings punctuating the minimal drones with their cryptical utterings. Laurent Perrier’s Pylône work (he has four tracks here) is somehow more satisfying, with more incident per square inch, and one can more immediately discern the development of ideas within his simple grid-like structures. The album works as a perfect split as both creators seem to share the same rather solemn temperament, give no titles to their compositions, and work with inscrutable, burnished surfaces of monolithic black sound.