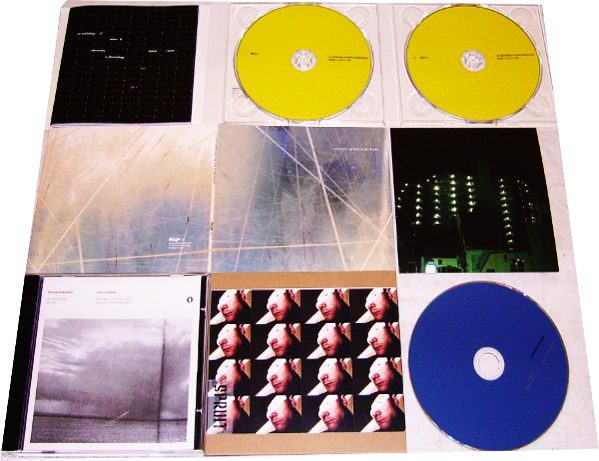 Sixth A-Chronology (SUB ROSA SR290) is remarkably the sixth volume in a series of compilations called An Anthology of Noise and Electronic Music to emerge from the Belgian label Sub-Rosa, home to many good art musics. “Rare and unpublished works” are featured from over 26 artistes; the label describe it as “concrete, electric, destructured and electronic music”. Curated as ever by Guy Marc Hinant, the method in this case is to give each musician / composer / performer a page or two of condensed notes inside the thick booklet bound into the 2-CD box, which rattles off factual information in ways to make your brain-pan do flip-flops, and providing a “select discography” in some instances that will cause most collectors and music fans to salivate with a mixture of anticipation and envy. In its efforts to present the history of experimental music as a richly diverse international continuum, or more simply perhaps to create the effect of a delicious trough of goodies into which we consumers can sink our greasy snouts, the compilation respecteth not such things as international boundaries, cultural differences, time periods, or indeed anything that might present a barrier to the unleashment of wild music and sound art. Accordingly we have a rough mix of Japanese noise from the 1990s, contemporary American experimenters, a smattering of “historical” analogue electronics, and a survey of other murderous post-Noise antics which have transpired in the last ten years plucked from China, Poland, Greece, Spain and Denmark, and other corners of the four-footed sock we call our globe. I’m certainly looking forward to strapping myself in and enjoying a blasting listen to this smorgasbord, when time permits.

A single 39-minute track of live performance music from Thomas Ankersmitt can be heard on Live In Utrecht (ASH INTERNATIONAL ASH 8.8), realised with the help of a computer, an alto saxophone and the Serge analogue modular synthesizer, that wheezing device which Pauline Oliveros made into a household word in America in the 1960s. Valerio Tricoli also contributed some saxophone and tape parts to this minimo-dynamic roarer, recorded in November 2007 at Rumor in Utrecht. Netherlandish musician Ankersmitt has performed in large venues where the intention is to disrupt your normal perception of the performance space, and as part of this goal he pours a tremendous amount of energy into his saxophone improvisations, allowing the sounds to cross-pollinate with the intense processing power of his computers. This is a devilish listen which may owe some small debt to the methods of the American minimalists, and it’s about one-third digital-acoustic churning, one third minimal blippings, and one third scrapey mesmeretic droning. I’ve had surgical operations that were less physically devastating than this…release is also noteworthy because it is, in a sense, his first solo CD.

Another release from Spruit, the Dutch electronicist who we last noted on this site in February 2010. He’s half-musician, half-surgeon, and on this release, half-entymologist too. Bits ‘n Blocks (SOUL SHINE THROUGH 04) is intended as “A digital ode to the humming buzz of insect in a hot summer field”; I can only say I hope never to encounter the species of insect that could be associated with this sort of relentless aural assault, for fear that I might be stung to death, nibbled into eighteen pieces and then swept away by its gigantic gossamer wings. Spruit takes the idea of austerity to the level of a monk living in a cell eating root vegetables, and his compressed digital telegrams leak out into the sound-field like angry attack dogs chained to leashes. Two short tracks (the set is just 16 minutes long) made with a mixing desk and electronic sources in Spring and Summer 2010.

Echohaus (DEKORDER 049) is a fascinating collaboration between Felix Kubin and the Ensemble Intégrales, of which the composer Burkhard Friedrich used to be a member and was involved with this unusual project too. It seems the musicians were deployed in separate rooms in the Westwerk building in Hamburg, given graphic scores, and pretty much told to get on with the job in hand while Kubin sat in a control room with his mixing desk, presiding over all like some avant-garde version of Phil Spector. Except that while Spector used to cackle with glee as he captured his elaborate pop arrangements on tape, somehow creating order from the chaos of 56 session musicians making a hideous racket in the performance studio, this album is far from gleeful and instead gives off a strange, distant vibe of alien coldness. It is filled with jarring dissonances and odd meandering passages, as though hearing Pierrot Lunaire and some nameless subdued work from Darmstadt replayed over a PA in a deserted football arena. So it’s not what I normally associate with Felix “Mr Fun Bags” Kubin, but there’s no denying the strength of the concept or the way that this strange music gradually creeps over you and inhabits your flesh, like a crawling Gila monster with its poisoned tongue.

Very nice to see Up Here In The Clouds (EDITIONS MEGO 106), another Editions Mego release from cindytalk, the extreme ambient project of Gordon Sharp; we very much enjoyed the bleak austerity of last year’s release The Crackle Of My Soul and it’s good to get one’s aural snappers into another slice of his brand of fog, sold in cubic feet from the slopes of the mountainsides where it was recorded. These 2003-2010 recordings were apparently made in the Mid-Levels in Hong Kong and Roi Vert in Okamoto; I’d like to think that Sharp created them through a mystical-alchemical process akin to bottling air from the slopes, but I suppose these digital escapades are likely to have a more prosaic explanation behind them. No matter, because these intensive abstractions are remarkably evocative of the extremes of weather and geography in ways that many creators wish they could emulate; listen for long enough to these fine glitchy drone-mulched rondellos and you become snowblind, sunblind, and unable to discern the horizon from the clouds. Titles such as ‘Hollow Stare’, ‘The Eight Sea’ and ‘I Walk Until I Fall’ confirm the extremely imaginative approach to fictional-landscaping and psychogeographical peregrinations undertaken by cindytalk. Just about anyone and everyone who’s sat themselves behind a synth since 1980 has aspired to justify having the word “glacial” applied to their work, but cindytalk certainly scoops the coveted “Golden Iceberg” prize for 2010 with this release.