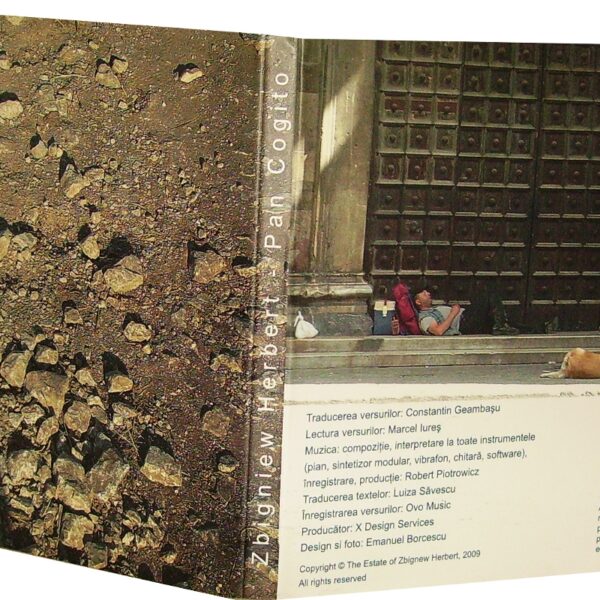 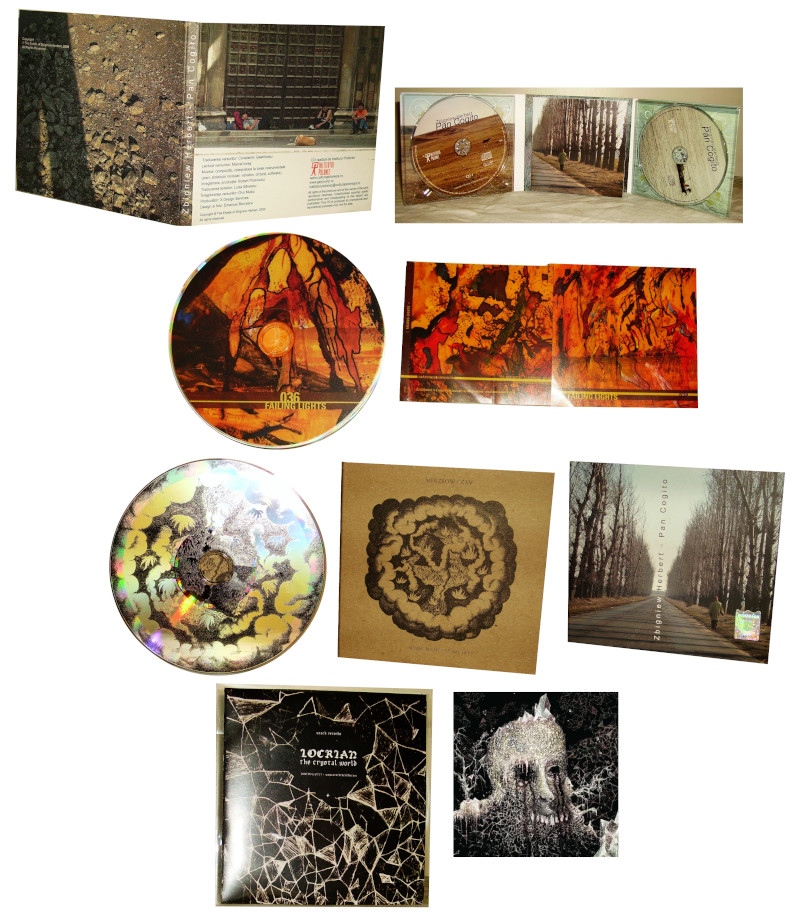 Here’s a spoken-word curio which showcases the poetry of Zbigniew Herbert, who I learn was one of Poland’s foremost post-war poets. Pan Cogito (INSTITUTUL POLONEZ) is a double-CD set with 52 short readings of his poems, all recited in Polish, and the book of notes is also in that language, so I’m at quite a major disadvantage…however I see that Robert Piotrowicz was involved, and he has impressed us before with his Guitar Granulizer and made a terrific record of apocalyptic dimensions called Rurokura and the Final Warn. I think he was responsible for creating the low-key dissonant musical backdrops that accompany each piece on this set – lots of uncertain piano and percussion droplets, mingled with washed-out ambient murk, all of which induces instant anxiety and depression in the listener. The readings themselves, delivered in a world-weary monotonous male voice, aren’t exactly designed to inculcate merry-making sensations in your bosom either. But Mr Cogito, the central character in this story, is no barrel of laughs, and some literary critics read him as a “petty and mediocre” citizen and that this work is one of Herbert’s most pessimistic commentaries on the failings of the 20th century. According to one critic, Mr Cogito is “a modern intellectual who reads the newspapers, recalls his childhood, his family; he also muses on pop-art, America, alienation, magic, an aging poet, the creative process.” Sleeve is decorated with various desolate photographic images of the countryside and the city that effectively convey a sense of futility and lonely, pointless journeys. What a great start to the year…

More futility on Failing Lights (INTRANSITIVE RECORDINGS 036), which is a superb solo work of creeping horror from the hands of Mike Connelly of Wolf Eyes and Hair Police fame. Note the fiery Hades-like colour scheme on the artworks (cave paintings executed in acid-tones of orange) and prepare yourself for a journey to the Saturnine realms. It’s designed as a single musical event in five sections and its anti-symphonic movements gently drag the unwilling listener deeper and deeper into a grim mental abyss. The fact that such abject terror is rendered as largely quiet and apparently unassuming music should not deceive you; pure evil lurks in every shadow here, and the sounds become increasingly repulsive and unrecognisable as the album progresses, until we reach the ultimate ghastliness which is the 18-minute closer ironically titled ‘The Comfort Zone’. This final supernatural non-zone of deathlitude and agony administers the coup de grace by piling on layers of grotesque, ill-matched organ chords in a relentless onslaught of slow torture. An excellent construction that explores the far reaches of psychic misery in ways that others cannot follow.

Gotten a nice promo version of Locrian‘s The Crystal World (UTECH RECORDS URCD056/057), which I think has since been issued in November 2010 as a two-disk set; I have only a copy of the first disk clutched in my tongs, which means I’m missing the epic 58-minute version of ‘Extinction’. Also my artwork is different, but I’m providing an image of the final version with its haunting supernatural visage. Here, the American duo of Terence Hannum and André Foisy, who make most of their gloom-craking eerie sounds with imaginative use of ectoplasmic guitar and vampiric keyboards, are joined by the drummer Steven Hess, who as I have said before is a competent enough player, but unfortunately I find his work turns this otherwise distinctive terror-project into just another stoner rock band, weighed down by plodding beats. However, there’s still many enjoyable passages of the distinctive suffocating Locrian blend to make this a worthwhile listen, for example the 11-minute ‘Pathogens’ which creates the effect of a deep mining shaft which is in imminent danger of collapsing on our heads at any moment. The band are joined by Gretchen Roehler’s violin and the anguished vocals of Erica Burgner on ‘Elevations and Depths’, another convincing portrait of world-ending events delivered as a slow and remorseless howl of pain.

Boy, will I be glad when this day’s over…Merzbow and Z’EV aren’t offering me much in the way of balm or relief for my bruised soul as they deliver 18 megatons of crashing metal and digital smashery on Spiral Right / Spiral Left (COLD SPRING RECORDS CSR133CD), wrapped in a cover whose 16th-century engraving depicts lakes of fire wrapped in a cloud of fog, seen in an aerial view. Actually this churning admixture isn’t really like feeling the dead hand of pessimism laid down on your sensitive inner being, but it is very dense, about as dense as molten lead being smelted in a foundry of titanic proportions. The two creators involved are also pretty titanic themselves, in terms of prodigious intellect and the quantity of their created output, and it seems they’ve been planning and honing this particular project for 20 years, scheming by means of fax and email. The final mutual remixes of the respective contributions were realised in London and Tokyo and are now set forth to roar in the world like lumbering monsters. Two long tracks of high-energy excess, and one can’t help but read the title as some sort of mystical instruction involving movements and passes that could be utilised by a Renaissance magician or an Egyptian sorcerer.