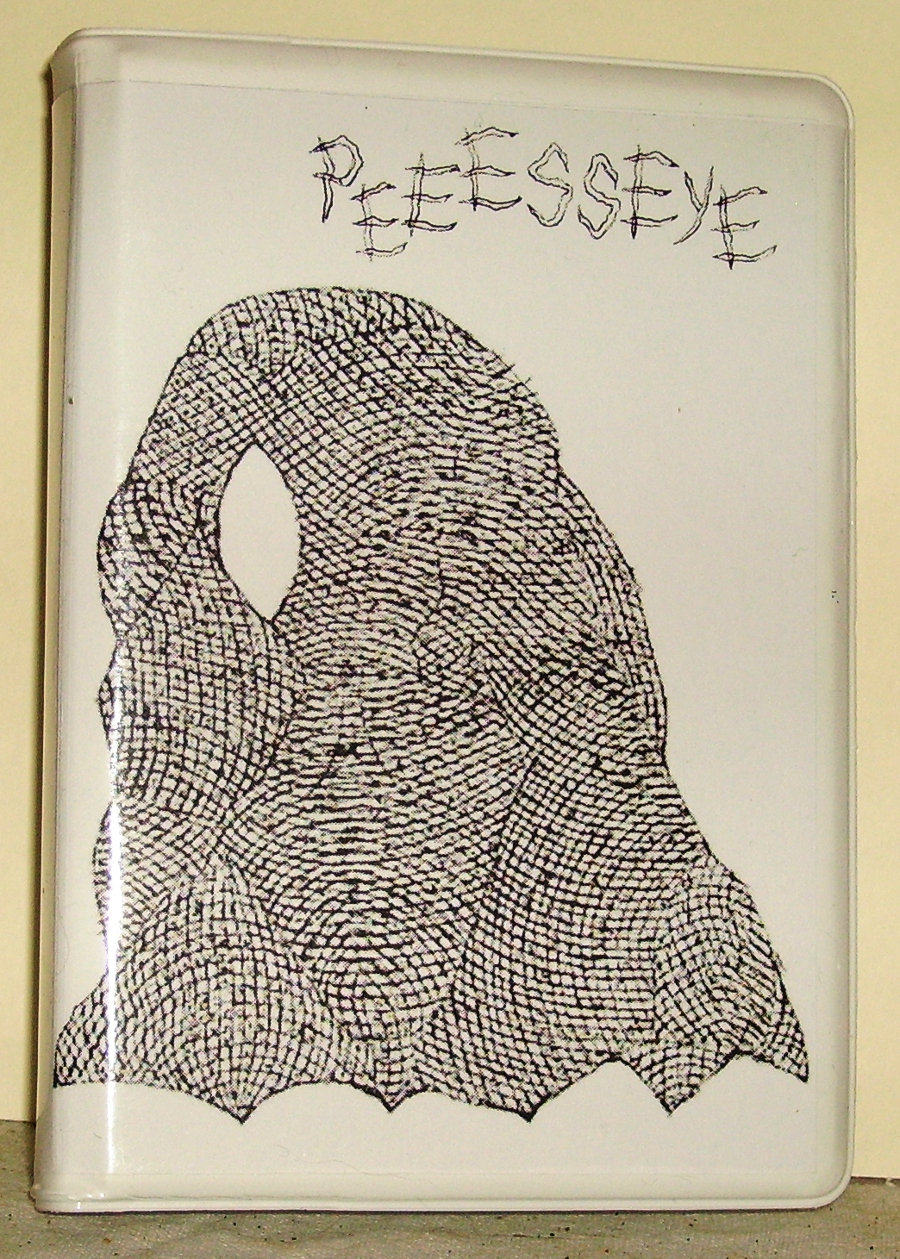 Bumper package sent in from Fritz Welch, the American player in Pee-Ess-Eye, who happens to have moved to Glasgow just now. “Hope you enjoy this bombardment of crap!” he scrawls cheerfully on his enclosed yellow Post-It notes…matter of fact most of the information you might need about these little stinkers comes direct from the tip of his magic pencil. Mounted inside an Oxfam Christmas Card in a linoprint envelope is Brittle Hammer Trio, “w/ Evan Currie of Mustle Tusk + Ali Robertson of Usurper”. This be 17 minutes of hesitant percussion-heavy improv with perhaps some saxophonic squeals wriggling about like tiny mice; “We Three Kings of Orient Are” quips one band member on this ungainly live recording. Sun Reverse The Footpedal (EVOLVING EAR EE009 / HUMAN SACRIFICE HS007) seems to be an “oldie” from 2004 and is a duo with the very fine Tim Olive, who is to free improvisation what Sam Snead is to the art of geometry. These guitar and percussion recordings were recorded in Brooklyn and they’re so groany, creaky, clonky and imperceptibly adrift in the mental atmosphere that they’re more like sketches, half-finished blueprints for ambitious improvisations to be played by other workmen on another building site. Gorgeous drawings by Matt Bua (Max Ernst woulda loved ya, keed!) appear to be half-embossed in this letterpress-type sleeve, courtesy of Thumbprint Press.

Reel Speed Artist – “old collaboration w/ California based John Seden” writes FW. Said Seden lets rip with his “drug guitar”, turntables and tapes for a half-hour of crazed electronic mayhem spewed out in 9 fragmentary bursts. You can’t afford to face another day without this stinking example of inchoate, grisly gut-twisting noise by your bedside, and natch it’s found a home on Chocolate Monk as CHOCO 214. As to what the other contributors bring to Reel Speed, it’s not clear, as powerhouse Seden seems more than capable of wrecking the house with his own ball and chain. From Chicago, dated 1998! Also we gots a bizarre tape in a bag, which is “tape + poster collaboration w/ NYC based Rueben Larch-Miller“. This was thing me pulled first from envelope and me thought for a minute me was finally receiving hate mail I so richly deserve after all these years, coz the poster is scrawled with insane utterances and abusive cries printed on a sheet of flimsy newsprint, on verso decorated with a mind-bending collage redolent of 1920s Hollywood Epics filtered through the giant poisoned electric head of Alex Jodorowsky. Freeze Dried Speculative Damnation is a solo tape by FW, not yet spun by my capstans, includes live version of ‘Politic Of Egg’ and may have been released by Archivo De Sangre De Dios. The W!77iN6 CD I already own and we reviewed it in the mag some time ago, but this duo w/ Ian Christe of Bazzillion Points Publishing is I seem to recall a benchmark of a particularly nasty strain of indigestible crank-noise. Shadow in the Swamp (SICK HEAD 23) is a PeeEssEye cassette including the titles ‘Sea Lettuce’ and ‘You’re Not Evil’ and already feels like a distant relative of a forgotten Wolf Eyes cassette in edition of four copies. Lastly there’s this visual printed item DEATHANDADA, an “ongoing art collab – this is a book from a recent show in Germany” selon FW. Rachel Lowther and Amalia Theodorakopoulos are the other eyeball-crunchers involved, and within this explosive tract collages, paintings, photos, treated images and found images and suchlike abound, laced with curiousness and rum-mode puzzlements, nothing by way of explanation. A few minutes spent with this pamphlet will begin the process of brain-rot you’ve all been looking for. Proven to relieve the pain of sensitive cerebellums.