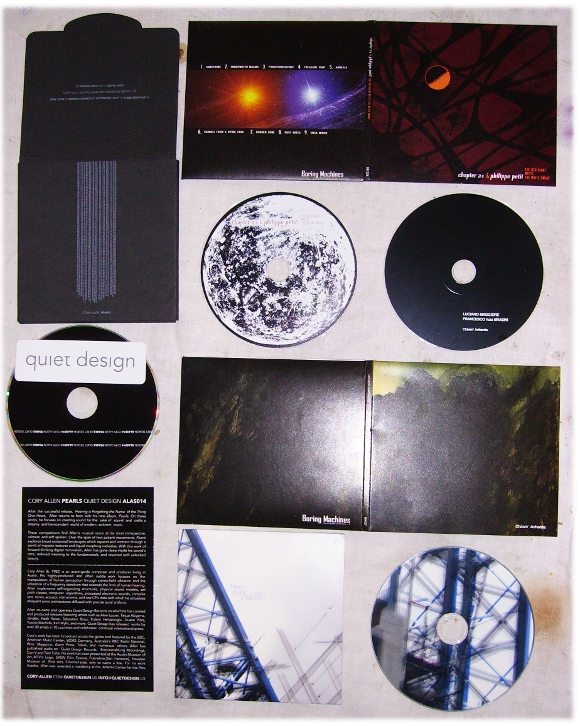 Put four Europeans together in a room and one way or another they’ll soon concoct a rich brew of instrumental lager-beer. This is the lesson learned from The Red Giant Meets The White Dwarf (BORING MACHINES BM026), a collaboration between Philippe Petit and Chapter 24, a trio of Greek players who took their name from a song on the first Pink Floyd LP and are equipped with a large panoply of guitars, keyboards, stringed instruments, and electronic effects for the creation of their titanic zodiacal impressions, and of course their own voices which ring across the wine-dark sea. To these, French kingpin Petit adds his field recordings, turntabling actions, and live electronic manipulations, and the team make known their “cosmic” aspirations with the album title and tunes like ‘Signal from a dying star’ and other titles not unlike records released by My Cat Is An Alien. They did it live on stage at the Bios festival in Athens in 2008. In no way “minimal”, this is one musical pan-continental meeting that has ended up as sweet and larded as one of those very filling Greek honey cakes, enhanced no doubt by several dollops of fine French chantilly cream. Play they slow or play they fast (and it’s mostly the former mode), you’re guaranteed a rich assortment of textures and flavours in every bite of this improvised ambient sweetmeat.

More ambient buzzment thrills from the same label, in the shape of Chàsm’ Achanès (BORING MACHINES BM027) recorded by the Italian duo of Luciano Maggiore and Francesco Fuzz Brasini. Maggiore has his tapes and electronic devices, while Brasini brings his home-made guitars to the picnic and has endeared himself to half the population of Bologna by taking his nickname from one of his pedal devices. But there’s barely any fuzz or distortion on this very clean-sounding process-art record, which clings to a basic monotone with all the determination of a sticky bud on the bough of an olive tree, the better to delineate the scarps and slopes of the “huge abyss” of the title, which is the translation thoughtfully provided by the creators. Shades of Dante (or John Martin) in the doomy climbing expedition undertaken here, illustrated by way of the dark cover art which is one of Maggiore’s paintings. Mattia Dallara added engineering skills to the project and helped to realise the three-dimensional nature of these mountainous sounds.

Roy Dodds and Jo Hutton are two English improvisers who perform as Mesh and work with combinations of wind instruments, percussion, and live electronics, putting them together on Music To Watch Cranes By (EYNHAM RECORDS). The work is directly inspired by “the sound of moving cranes and the surrounding landscapes”, but if their vivid description leads you to expect semi-industrial “metal” noise of some sort, you might be surprised by the grace and charm of this spindly disk with its many interwoven lines of cobwebs and molecular chains. These imaginary derricks all seem to be working late at night in a deserted shipyard, and swinging their metal arms with all the surreal movements of an upside-down Savate boxer. My main stumbling block is Hutton’s saxophone work which is just a shade too corny for me; I keep expecting the record to turn into the moody soundtrack for a car advert. Mesh sometimes manage to exude some decent sounds, even when they appear a little too reliant on electronic filters and over-familiar effects; and a title like ‘Full Metal Bucket’ shows they don’t lack a sense of humour.

US composer Cory Allen from Austin Texas brings us another solo record, Pearls (QUIET DESIGN ALAS014). Four very assured pieces of slow “digital ambient” music wherein occasional melodic chimes and notes (perhaps from a very distorted electric piano) occasionally drift in and out of a simple abstracted ocean of mysterious hiss, glitch, and murmuring waveforms. It’s impressive how Allen maintains a sense of gradual forward-movement, rather than stasis, out of of such simple means, and this record is a very pleasant place to abide for 36 minutes. The aim of the record is to create sound for its own sake, while at the same time apparently refusing any sort of ornamentation that might lend “meaning” to the work. Colour and form are presented with the simple joy of a painter, for the pleasure they bring to the senses.