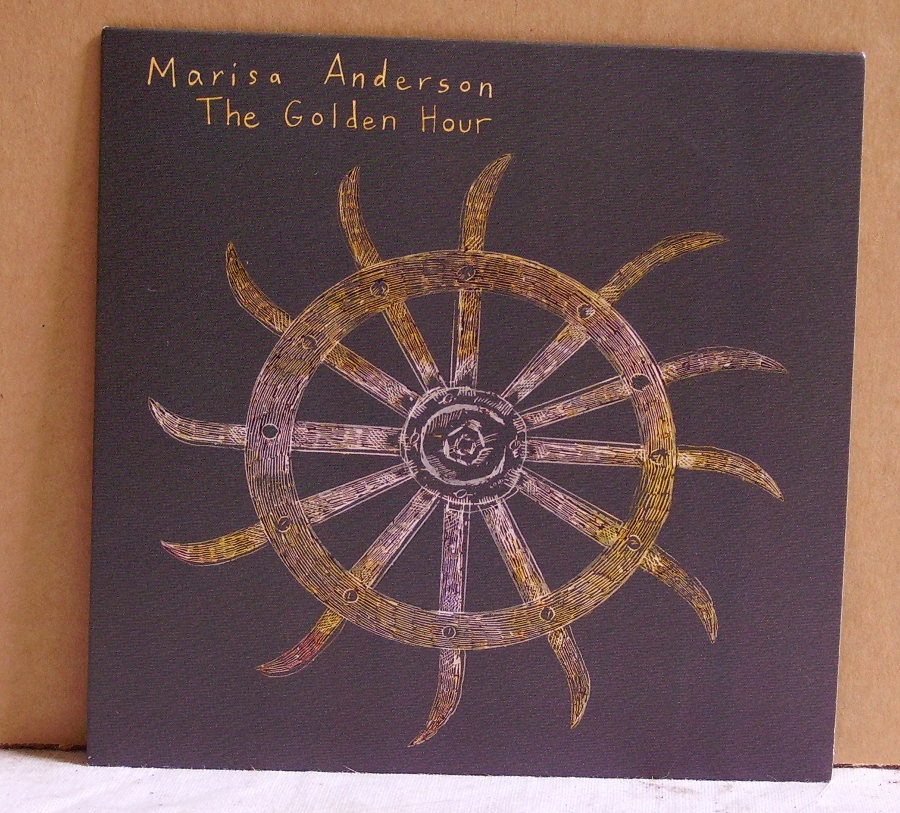 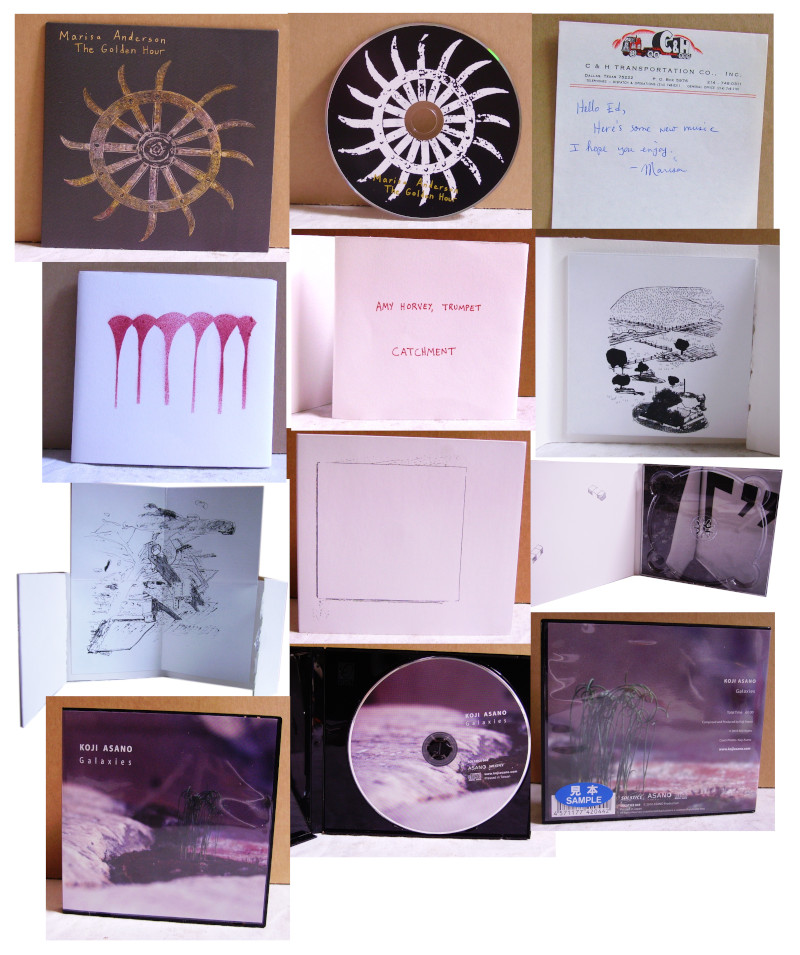 The Golden Hour (MISSISSIPPI RECORDS) is a fine solo guitar record from Marisa Anderson strumming her way from Portland Oregon. As you know we were very impressed last year with Ava Mendoza’s solo guitar LP, and while Anderson is likewise influenced by American folk and blues styles (one of her tunes references Blind Willie McTell), she has also taken on board African, C&W, and gospel into her hand-woven bushels, and overall her style is more diffuse and dreamy than Mendoza. While my preference is for the raucous Delta slide blues noise that opens the record (‘Drop Down’), the album is mostly a set of meandering melodic finger-picking, languid strums, slide effects and the like. Anderson works at the Rock ‘n’ Roll Camp for Girls and is also a paid-up member of the Winter Solstice Puppet Collection, both of which enterprises sound very intriguing. Note how the cover art transforms a wagon-wheel motif into something bordering on a Pagan symbol. I’m also happy to receive records from a gal who uses old headed notepaper from a Dallas trucking company. 1960s printed ephemera from C&H are now very collectable, as this eBay item will testify.

I’ve also got Catchment from Canadian trumpeter and composer Amy Horvey, a very fine item which I must have had lurking in the paniers since November last year and have overlooked for too long. On this unusual record, she collaborates with three other composers Cassandra Miller, Isak Goldschneider and Jeff Morton, plus the organ player Valerie Hall, and produces four pieces of quiet and elusive beauty, with some fascinating idiosyncratic diversions (such as when Horvey appears to be muttering to herself down the tube of her instrument). One of the things she does is take her trumpet outdoors into very specific environmental settings; one piece re-records the previously scored trumpet and organ sections in a pedestrian underpass in the city, while another is performed in a nature reserve near the South Saskatchewan River. She has plenty of strong ideas about harmonics and contrasting timbres, and aims to “bring a range of landscapes…into the private space of the listener.” Amy Horvey’s approach to the environment is extremely engaged and produces wonderful limpid music, and is quite a welcome change from what so many others do, i.e. layering their rather dull field recordings together with sound recordings from acoustic instruments inside a laptop computer. I also get the sense that her collaborators are not just talented musicians who can play the notes as written down, but very simpatico friends whose ideas and instincts align themselves strongly with her magical-mystical notions about inner worlds and psychologies. A very beautiful release which I recommend.

Helhesten is a trio of players based in Glasgow offering us mysterious and murky acoustic treats on Samemaker (HUMBUG 097). Not completely sure who is playing what on these tremblo ghost-mode pieces, but a keening voice, a wailing clarinet, and a sharpened acoustic guitar are among the elements discernible to my inept lugs. There is also much attention paid to the acoustics and dynamics of the room space, allowing natural echo to play a part, and add much in the way of creaky atmosphere; this may say something for the sensitivity and skills of their recording engineer. Such timbres! As I listen curious sensations are imparted as beautifully bleak as a week by the seaside in a strange deserted town under an April rain and grey empty skies; the players seem to be literally adrift, if not almost drowning, in their own unnameable emotions. Some members of this group are also in Towering Breaker, who in turn have connections to Adam Lygo, and had an LP released by Psykick Dance Hall in 2009.

Japanese sound-art supremo Koji Asano seems to be back in the releasing saddle after some four years of rest and respite. About ten years ago you couldn’t move an inch in my flat without tripping over a new record from this guy; he put out ten albums, including a four-CD set, in 2001 alone. While he has been capable of producing some quite lumpy and gnobbly electronic music, Galaxies (SOLSTICE 044) is a soothing item comprised from recordings of those old stand-bys, the rain and insects. I think I can also make out some passing traffic in the far distance underneath the continual purring and chattering layers, so perhaps this hour-long immersive epic was realised in a semi-rural part of Japan rather than in the full depths of the Amazonian rainforests, than which nothing less would have satisfied Francisco López when he was pointing his hyper-sensitive mics at bugs, treetrunks and mildew. Cover photos by Asano seem to match his prevailing purple colour scheme, although he was also strong with blues and greens as I recall.