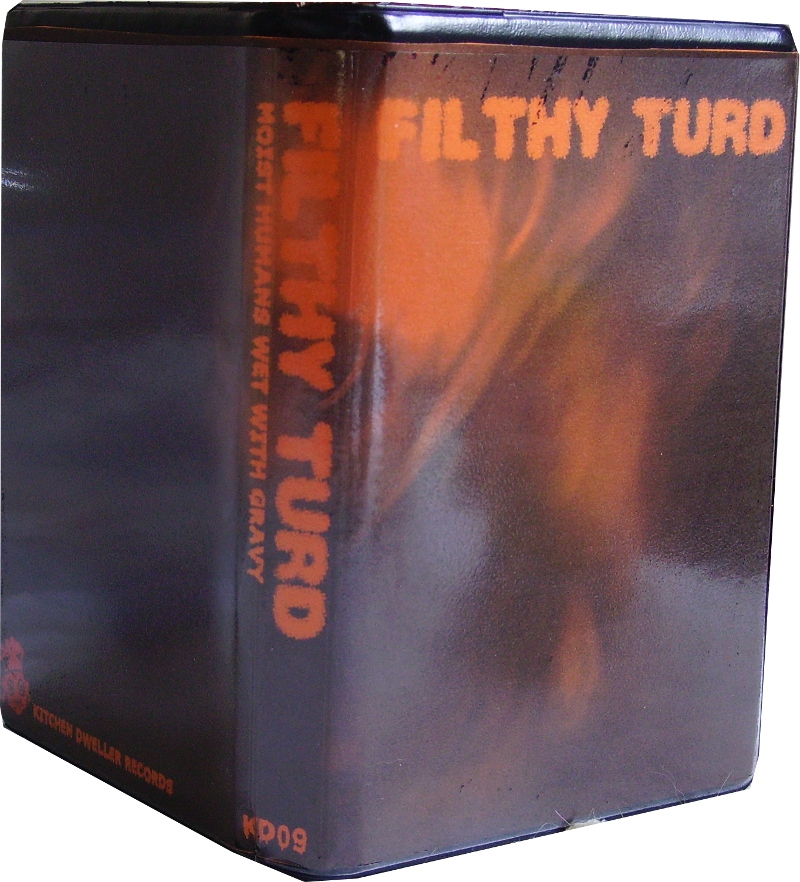 Late December 2010 we took in another package of eruptions from Filthy Turd, the English art-monster who continues to unleash his particularly peculiar foul brand of harsh noise. Two cassettes which slithered out of the envelope demonstrate just what this man can do with his own voice and two greasy microphones in his hands, provided there’s a good bathtub full of distortion on hand to dissolve the corpse, and a sufficiently degraded set of technology to generate crude, whirly loops which seem to be spinning out of control. Moist Humans Wet With Gravy (KITCHEN DWELLER RECORDS KD09) repulses all comers with the certainty of a sea-faring brigand armed with sabre and cutlass; it just grinds away your features in seconds. Pollutive Static (NO LABEL) is slightly more approachable, but it’s still reeking with the faintly surreal strain of indigestion and bad dreams that Mr Filthy relishes with the unhealthy ardour of an evil pharmacist.

Filthy Turd and Jackie Crab isn’t exactly a collaboration but a split enterprise where these two inhuman beasts alternate their assault, serving up seven tracks apiece on this Zebra-decorated CDR. Jackie Crab, who’s a marginal Japanese noise wrecker, wanted a piece of product for touring purposes and wanted it quickly, so he pressed Filthy T into service, who delivered in spades, or even using a spade; he shovels his contributions into the aural trough like so much five-week-old dung. He shares a little common ground with Crab (especially the way they both massacre the human voice) but Crab is highly diabolical with his use of loops, feedback, and fragments of heavy metal guitar – the latter effect probably produced with a lump of gnarled metal. Turd’s titles make crude Dada-like poetry out of human bodily functions, while Crab is just plain out of his gourd, with his ‘Pornographic Flute’ and ‘Hebrew Custard’. Virtually zero copies of this exist and you can’t buy it anywhere.

Also very limited (20 copies only, of which mine is #10) is a split CDR (TFR025) from Trashfuck Records, delivering two lengthy blasts of horror. RedSK plays his Convoluted Hymns for 33 minutes, first wrestling with gigantic metallic snakes and then descending into more conventional noise-wall buffets. Aye, it’s got plenty of twists and turns, but follows the logic of a derailed ghost-train ride. Mackle Jackle has 43 minutes of Shanakee Dogs, a grisly concoction of cassette-tape layers and overdubs taking the notion of “lo fi” into the very lowest depths of Hades. Illegible voices, gurgling, hissing and churning monstrousness obliterate whatever is leaking from the television set which was in the corner of the room when Jackle was brewing this abomination.

With The Witches Tit The Golden Dung (SIDE A RECORDS SARS006) we find Filthy Turd with another of his very idiosyncratic “occult” concept albums, not unlike An Occult History of the Midlands which we noted here. Ten songs which veer from one extreme to another, alternating between grotesque gurgling vocals against a backdrop of slowly-mutating chemistry, and plain rockin’ blast-noise that scorches your bones as black as pitch. The fantastic titles for these songs are tiny gems of compression mixing up ill-fitting elements with the assurance of a Crone pitching ingredients into her cauldron, and at times you’ll think Filthy Turd has actually witnessed the practice of some terrifying forbidden rite under the full moon. I’m sure he’d deny it fiercely, but I think he’s gifted with unique writing skills (just try decoding the messages on his blog), which is what suggests to me there are layers of shocking and startling information just waiting to be dug out from the aural quagmire that oozes off this unlistenable recording. It’s slightly frustrating that he hides his verbal talents behind an ugly mask of distortion, but that’s the whole point. Limited to 23 copies in a gold spray-painted digipak.