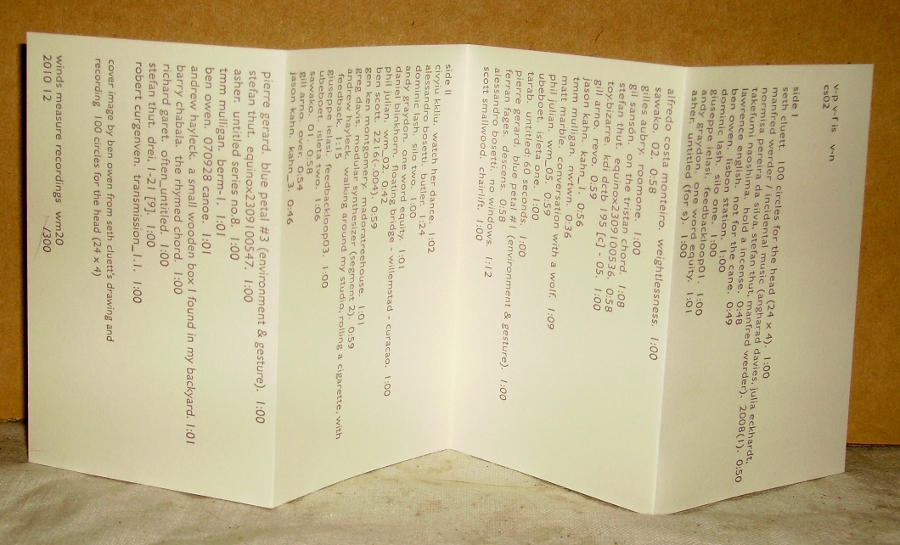 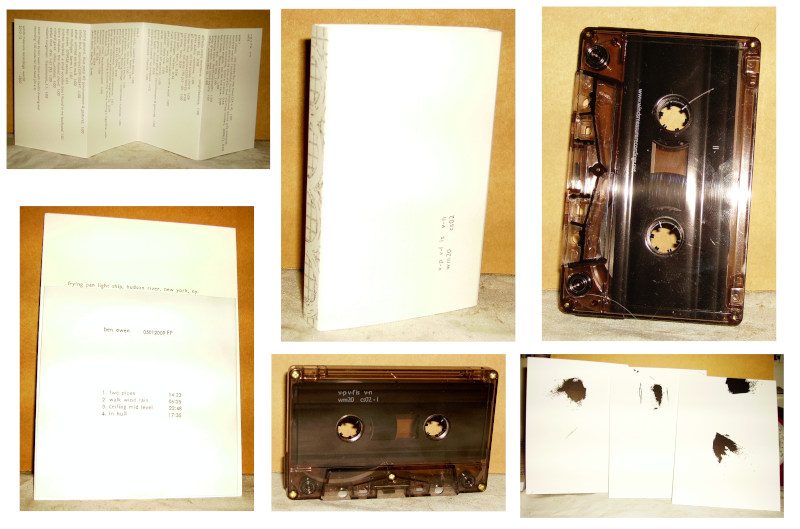 Here’s two splendid releases of contemporary minimalist sound-art. The cassette comes from the American micro label Winds Measure Recordings in Brooklyn. Small scale they may be, but their ambitions are as big as the Flatiron building on Fifth Avenue, and they are releasing things that Peggy Guggenheim would have gladly embraced with her spindly, foal-like forelegs. Released in December 2010, it’s called v-p v-f is v-n (WINDS MEASURE RECORDINGS wm20 cs02) and, on the face of it, is a showcase for long list of international sound artists, all of whom contribute one or several pieces around a minute in length. Andy Grayson, Tarab, Alessandro Bosetti, Scott Smallwood, Ben Scott, Ferran Fages, Gen Ken Montgomery, Lawrence English are all here, and they’re just some of the ones I’ve heard of. Play the tape and you’ll be greeted with a glorious stream of sonic information recorded / realised in a host of locations, at varying times; there’s noise, field recordings, music, near-silence, abstract sounds, literal sounds, white noise, black noise, everything playing like the essence of pure, distilled, art. Forget about trying to exactly match the names to the sounds, unless you bring a stopwatch to the party; and even if you do, you’ll be tripped up by the titles, which conceal as much as they explain, and can even take you longer to read than to listen to the sonic snippet. These titles alone, printed here like the contents page to an impossibly interesting book of natural history, indicate the range of artistic methods: some are plain and descriptive; some are scientific, quoting number strings which might be dates or grid references; some are poetic, inventing pure fiction for purposes of eyebrow-raisement. My personal favourite title might be Matt Marble’s ‘Conversation with a wolf’. Observant readers will recall the predecessor release to this recording, which came out in 2008 on this label as two vinyl seven-inchers, playing at different speeds and pressed with some locking grooves for added conceptual art wow-factor. Whereas that release seemed to me quite static, like a miniature art gallery, this cassette is more like a spool of avant-garde cinema, each length of 8mm painterly genius spliced carefully next to its neighbour to create two sumptuous time-based art events. And rest assured the assembly / sequencing has been done with tremendous care and sensitivity, everything occupying just the “right” place. 300 copies only in a delicate letterpress card wrapper. Recommended.

05012009 FP is a solo CDR by Ben Owen (founder of Winds Measure), in an edition of 50 copies with hand-made postcards inserted. Apparently these four pieces are work in progress for a planned installation piece at the Frying Pan on the Hudson River. All of them sound like they’re taking place in the hold of a ship, with a background rhythm of wooden creaking that is oddly compelling. There’s also an abundance of water and pipes, which may be malfunctioning plumbing or something even worse; the environment he creates (or documents) here is simultaneously familiar and threatening. I’ve always been troubled by the possibility of a leaky roof, and for me that’s what adds a dangerous edge to these vivid examples of minimal field-recording work which seem to be vaguely shading over into site-specific documentary sound art, setting the scene for whatever performance he intends to realise. While Owen has done ultra-quiet pieces in the past, this one may be relatively uneventful, but the sonic events here are so sharp you could polish them like diamonds. The photographs of minimal black streaks have been derived from photographs of visual art by Shimpei Takeda. Very nice item.

Further blather on the cassette release, while I remember. Far more than just another compilation, it’s making a deliberate virtue out of short time duration in a very judicious way. I often wonder why this format hasn’t been more widely taken up; I’m very fond of the 1980 LP Miniatures (compiled by Morgan Fisher), even though it’s a little “wacky” in places, and of course The Residents and The Commercial Album which was released the same year. The Residents must have worked like demons with their studio varispeed, editors and time-keeping devices; every track was brought in at precisely 60 seconds. Any other striking examples of the “miniaturist” format that you know about, dear reader?