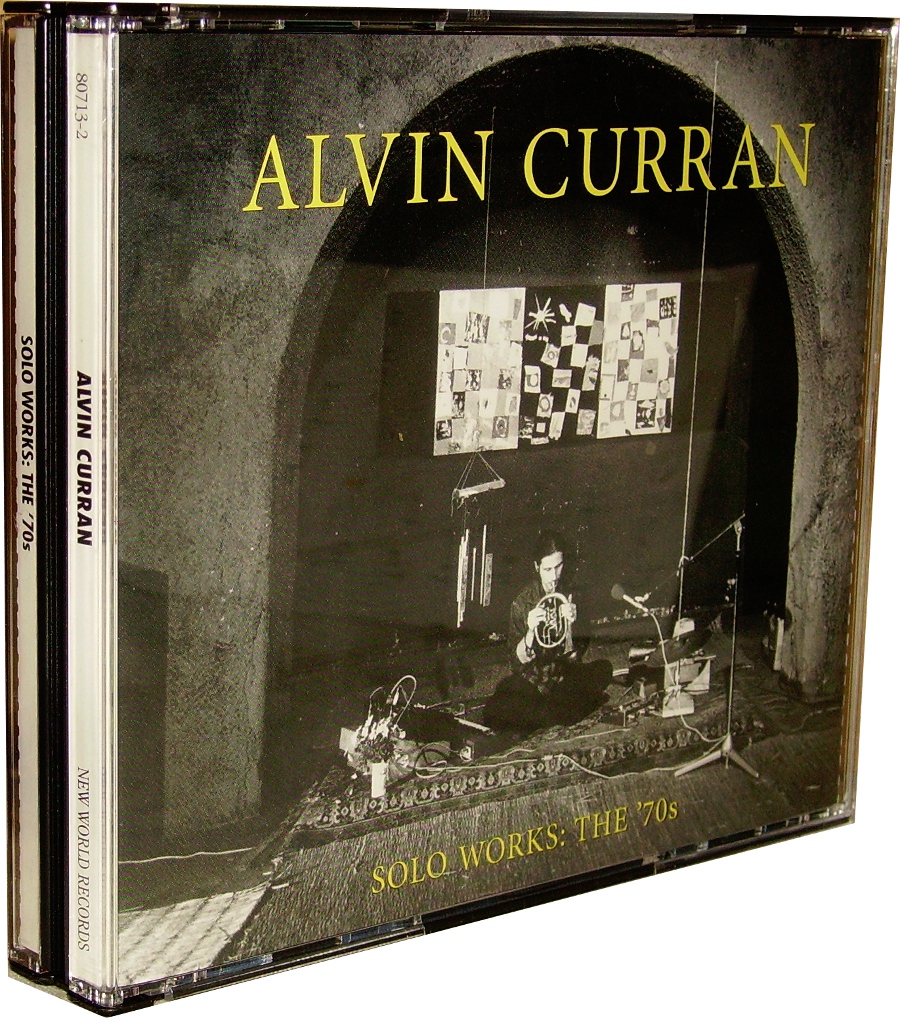 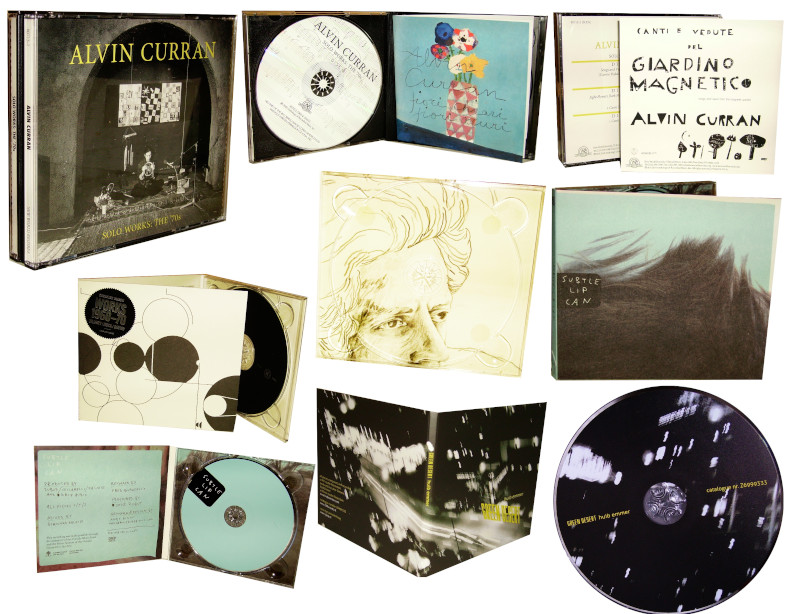 American composer Alvin Curran never ceases to astound me with his accomplishments…some people would have been contented with just being a member of a seminal improvising group in the 1960s (MEV), but in recent years he’s continued to create strong and unusual works, such as the very distinctive Maritime Rites, a set of radio compositions that has done for lighthouses and foghorns what Ligeti did for metronomes. Now here’s a chance to revisit four of Curran’s 1970s compositions, on Solo Works: The ’70s (NEW WORLD RECORDS 80713-2), a release to be muchly welcomed given the relative rarity of the original records. Granted, Songs and Views from the Magnetic Garden is one of those subtle, breathy and percussive works that you gotta be in the right frame of mind to dig, but skip ahead to the third disc of this 3-CD box set to glom a piece of Canti Illuminati, a 1977 vocal work on which he wails his minimal phrases over simple piano arpeggios to generate meditative impressions no less holy than the music of the great Sufi acolyte himself, Terry Riley. There’s more raga-influenced piano and voice music on The Works (from 1976), whose second part has some terrific pointilliste electronic effects leaking out from Curran’s Serge synth set-up. Also here is Light Flowers / Dark Flowers from 1974. The original LP covers are reproduced in the booklet, which as usual for this label has an abundance of printed notes, info, discursions, explanations, and photographs dating from this fecund and oft-overlooked decade. A unique collection of vocals, gamelan, horn music, synth electronics, field recordings, and more.

MEV once shared an LP with AMM on the Mainstream label in 1968. Collectors of this rare LP sometimes swap stories about how the sides were mispressed and gave some unsuspecting listeners quite the wrong impression of the music of these respective founders of group improvisation. This is by way of introducing Cornelius Cardew Works 1960-70 (+3DB 012), which is a set of six pieces of 20th century chamber music by this unclassifiable English maverick, who at one stage of his career was an enthused apologist for all that was avant-garde and cutting-edge in music composition. Played here by John Tilbury, the AMM pianist who is also acknowledged as a supremo interpreter of Morton Feldman; Michael Duch on the double bass; and the Welsh harpist, Rhodri Davies. An inspired choice of personnel for this trio, a real dream team; and the selection of music is likewise ingenious. True, the famous ‘Treatise’ is excerpted here, but so are less familiar works such as the somewhat untypical ‘Unintended Piano Music’ (by Duch’s account, this one stands alone among Cardew’s works), and ‘Autumn 60’ which is an early piece of indeterminism from a time when John Cage was the name in the mouths of all the international cognoscenti. Improvising whizz Duch (also a member of Lemur, among other things) is drawn to the selections on this album as they represent a time when Cardew was moving away from his Cage/Stockhausen influences and entering the orbit of AMM and free improvisation. Not an “eventful” record this, but the quiet acoustic passages, played at all times with the utmost precision and deliberation, exert a delicate magnetic force.

Whole essays have been written, or will be written, on that grey area between improvised music and those fields of indeterminism which Cage didn’t so much set in motion like hares over the hill as point them out to everyone as being under our noses all along, before he resumed counting the grains of turmeric in his spice rack with a knowing smirk. Exhibit A in the folios of such essayists is usually the Stockhausen non-scored experiments released as the box set From The Seven Days. None of this is necessarily connected to Subtle Lip Can (DRIP AUDIO DA00646), but it is a groovy record of some of the scrapiest and full-bodied noise-drone improv to have leaped onto our table like some gigantic cicada. Isaiah Ceccarelli, Bernard Falaise and Joshua Zubot use strings, guitar, percussion and piano on these urgent and impolite eruptions of creakiness and crankoid utterances, passing on the impression at all times that the house is falling down, or is about to; I can see the cracks forming across the ceiling as I listen. Impressive to learn that this is the debut record from these three Canadians (at least, in this group incarnation), which came about after one successful grind-fest in Montreal that has bonded them together for keeps. My nights should be so exciting. Nice tuft of excited wiry hair on the cover there too.

Green Desert (Z6 RECORDS Z6999333) is a crackling dose of assured and enjoyable electronic music from Dutch composer Huib Emmer, a man whose forearms are as greasy with the analogue swathes as surely as if he were a car mechanic immersed all day in the synthi-pit. 11 studio pieces produced by Lukas Simonis and recorded in Rotterdam, and Emmer sets about his work with a strong determination to invent, reinvent, and polish each blackened surface as he passes by, like a very conscientious minimal sculptor. Noise, melody, samples, beats, abstractions; all is ladled thickly into the Emmer barrels like good rich treacle. I can cheerfully recommend this record to you if you enjoy the music of Cluster, Peter Rehberg, Kraftwerk, the Radiophonic Workshop, or (fellow Dutch composer) Tom Dissevelt. Emmer is a 1970s graduate of the Hague music school and this fine disc, kindly sent to me by the man himself, was released in November 2010.